Review for Holding On To Heaven by Keta Diablo 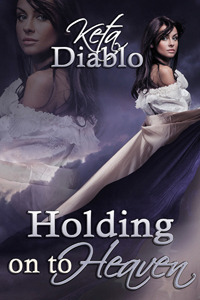 Brothers in love with the same woman -- one the father to her child, the other her husband. An epic historical spanning two generations.

The Civil War has crumbled a Nation, and the Dakota Sioux are on the warpath. While the blazing fires of revolt ravage the countryside, Lauren and Sage McCain are trapped amid the flames of destiny.

Holding on to Heaven is a story of love between two men and a woman, love between siblings, and love that crosses all boundaries and forges all cultures.


*******************
Keta Diablo has created a highly emotional read sweeping in its drama and action.  From start to finish you're on the edge of your seat waiting for your heartstrings to get tugged again or your jaw to drop on the floor from the highly unexpected events.  So get ready for one heckuva ride as you start reading this sexy historical.
HOTH is basically two different stories that finally converge in an unexpected way.  With a story full of memorable characters, the reader is put into heart tugging situations that keeps you on your toes.  From our first introduction to her as she's being born, Lauren McCain's life is full of drama.  And once she meets Creed Gatlin things only get more complicated.  As a spoiled only child Lauren takes on an attitude that can be annoying at times.  She can be selfish and condescending at times particularly with the man she finds attractive.  It's an odd form of foreplay you could say and it made it hard to relate to her character at first.
With his problems expressing emotion and tendency to anger easily, Creed is a very good match for her.  They're like bickering children though and it makes it hard to understand what they see in each other.  Their sexual connection is off the charts though and it's here where you can see their deep connection.  Their sexual interludes are steamy, intense, and animalistic.  They're in heavy lust, almost an obsession that neither can ignore.  And with a sexy beast like Creed, I can understand Lauren's lustful thoughts.
Once war intrudes, their relationship takes a dramatic turn and this is when the action really picks up.  I was often caught off guard by what happened and it was like watching a miniseries with its highly dramatic events.  A reader could easily get sucked in to this section of the book.
While Lauren's life was full of heart pounding events, Sage's was much quieter but no less exciting.  I liked Sage very much compared to Lauren as she was a more mature character in her demeanor and attitude.  Even with her isolated upbringing I found her to be wiser of the world.  The relationship between her and her love Wapanaya progressed much slower than Creed's and Lauren's did and it made their connection much more believable.  They actually got to know each other and had equally calm demeanors that cemented their relationship.  They were partners instead of children butting heads and I enjoyed watching their relationship mature.
Seeing the differences in these two women's lives and finding out their connection later on in the story made for an interesting facet to the story.  The non-stop action and memorable secondary characters add to the story's appeal and have me excited for the sequel to HOTH.  Yes, I said sequel!  This story ends on a very intriguing cliffhanger that has big ramifications and left my jaw on the desk.  So lovers of the historical genre can rest assured of being entertained when picking up this book.  Just get ready for the toe tapping that you'll be doing waiting for the sequel.
My rating for this is a B-
*I received this book from the author in exchange for my honest opinion.
at December 17, 2011