Book Tour for Sweet As Sin by Kenya Carlton 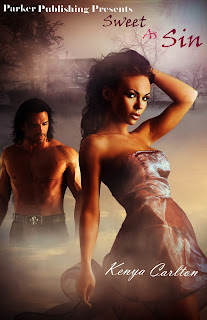 
The Maddies and Greys of the world.


Sweet as Sin is predominantly a love story with two people who couldn’t have been more different but fit as a couple just right. The best friend Madeleine Fletcher and cousin Grey Devilin shed light on the two main characters’ personalities. I can honestly say everyone needs a little Maddie and Grey in their life.  These two were the yin to the main character yang until Drake and Sienna found each other.

Sweet as Sin is set in 1933 and these two are the pioneers of the group.  Maddie’s security with her sexuality and Grey’s insecurity with his made for an interesting dynamic when they eventually went off to have adventures together.
A sex kitten, Maddie Fletcher is unapologetic about who she is and could care less about what anyone thinks.  She is the hard edge to the serene spirit of Sienna Caldwell and Maddie wouldn’t want it any other way.
Grey Devilin is the smart ass no one wants around but can always count on being there.  Drake doesn’t particularly like his cousin.  It’s quite obvious he wouldn’t mind if Grey would simply disappear, but the sense of obligation and responsibilities Drake feels for his family was a quiet but strong aspect of his personality.  For me the best way to display Drake’s deep rooted sense of responsibility was through the douche’ nature of his cousin Grey.
Maddie and Grey were set in stone from the very start. The only thing I didn’t count on was Grey’s transformation and Maddie’s lack of one. Neither of my main characters could have been who they were without their sidekicks. 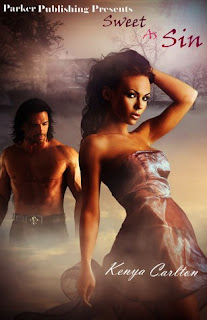 Sweet As Sin
By Kenya Carlton
Genre: Multicultural Paranormal Romance
The rich and available Captain Drake Devilin had the biggest body count in World War I.  Injected with serum that turned him into something unnatural, Drake’s troop annihilated the enemy, but once his tour ended, Drake was plunged into a world of family tragedy and financial ruin.

Sienna Caldwell is stunning to even the biggest cynic; with her exotic looks and rich brown skin, the playboy wasn’t exempt from her charms.  Buckling under the pressure of his financially strapped inheritance, Drake makes a deal with the devil to marry the prosperous landowner in order to protect her.

After one year, he can return the black beauty back to her island and collect on the fortune that will save his family’s reputation, but the task proves far easier said than done.   The war may have made Drake into something lethal, but he soon finds his new bride was born more powerful than he could ever imagine.  Not only does Drake have to figure out away to keep his hands off his alluring wife, but also he has to make sure she stays alive.

“May I?” The shadow at Sienna's small cottage door asked. Drake's muscular frame was a stark contrast to the chaos from the elements beyond him.

“Do you need an invitation?”

“For the sake of my honor and politeness, I certainly do,” Drake admitted. Not completely satisfied with his answer she considered his request. He may not be the undead but he was definitely something.

Sienna sat nestled in her favorite love seat, facing the fire finally relenting, she told him, “Be my guest.” She noted the quick way he surveyed his surroundings when he stepped across the threshold, first the exits-windows, décor than finally his eyes settled upon her. Unwilling to bend to his close scrutiny, she took a sip from her wine.

“It's cozy here, not anything like the resort. May I?” She nodded for him to help himself to her spirits as he took a seat in a cushioned chair. Masculine man, dainty chair taking up space with his mere presence made Drake appear even bigger and stronger than he had in the gazebo.

“Courage?” she asked him pouring a glass.

“Restraint,” Drake answered before holding it up for a toast. “To good decisions.”
“Good decisions,” she reiterated kissing his glass with hers. A moment was taken to drink and think before he began to press her for answers.

“It's a simple proposition,” he stated.

“Is it?” Sienna tightened the shawl she held around her bare arms, the fire made no difference to the temperature of the room; she merely made the fire for ambiance but now she felt exposed so close to this imposing man. The bright and colorful flames helped with her state of mind as well as the red wine and Mary Shelley book that now lay abandoned on her lap.

“You're exquisite,” he said matter-of-factly.

“That didn't sound much like a compliment, Mr. Devilin.”

“Why aren't you married?”

“A proposal has never come up.”

“I find that hard to believe.” In a single gulp, he finished his wine.
“How old are you, Mr. Devilin?”

“And you've never been married?”

His smile was one of a pure blooded playboy. “It's never come up,” he replied with a lopsided smirk.

“What's good for the goose is not necessarily good for the gander, I suppose.”
Sienna grabbed the wine bottle and offered him a refill; he gladly accepted.

“I understand my benefit in this whole crazy scheme but not yours.” He gently pushed.

“Does that make you uncomfortable, not knowing?”

“It makes me question the sanity of this request, Sienna. I don’t believe in one sided deals and I don't believe in modern day martyrs.”  From the intense look in his eyes, she believed what he said.

Agitated by this man's closeness and all he would change in her world, she uncurled her feet from beneath her and set them on the floor. The storm beyond her four walls picked up. Sienna crossed to the window to watch the thunder and lightning explode.

“I'm afraid my answer remains the same.”
AUTHOR BIO:
Kenya has a B.A. in Mass communication, Television and Radio. She has fifteen years in production of television and film and five in television engineering. In 2009 Kenya Produced Dawn a short film and Executive Produced Destination Everywhere the pilot for a travel series through her production company Black R.O.K Productions established in 2008.
at December 22, 2011