Review for To Wed a Wild Lord by Sabrina Jeffries 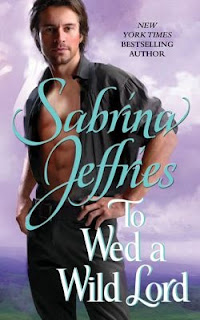 Drowning in guilt over his best friend's death seven years ago, Lord Gabriel Sharpe, the Angel of Death, knows his only hope at redemption is a race against a shocking opponent.

Shrouded in darkness for the past seven years, the infamous racer Lord Gabriel Sharpe is known to accept every challenge to race thrown at him. When his next challenge comes in the form of his late best friend's sister, Virginia Waverly, Gabe is shocked. Yet she presents just the opportunity Gabe needs--marriage to fulfill his grandmother's ultimatum and ensure his inheritance. What he didn't count on was needing her love.


********************
To Wed a Wild Lord is the fourth book in the Hellions of Halstead Hall series and was an entertaining read from start to finish.  Not having read the previous books in this series I thought I'd feel lost, but courtesy of a wonderful hero I found myself easily immersed in the story.  Not only does the hero make this a great read, but the spunky heroine and outspoken secondary characters add to the satisfaction.
Lord Gabriel Sharpe has a death wish after witnessing the death of his friend Roger while they were racing.  He carries a lot of guilt over this and has let it permeate his whole life as he's become known as The Angel of Death with his all black clothing.  Roger's death wasn't his first brush with death though.  The death of his parents, and the ongoing mystery surrounding the event that permeates the series, also weighs on him as he struggles to find a mystery man that might play a part in their deaths.  Both of these events have him leery of investing in an uncertain future.  He's given no choice though when his grandmother orders him to marry in order for his siblings and him to receive an inheritance.  Wanting to appease his grandmother and ease his conscience he decides to go after Virginia Waverly, Roger's sister.
Virginia's not like other girls though.  She loves horses, runs the family farm, and is very outspoken which has kept her from marrying since there's no man that will tolerate her manly ways.  She has hated Gabe since that fateful day and has been pestering him to race her so she can humiliate him when she wins.  Until now Gabe has refused, but with his grandmother's ultimatum he now uses their race as a way to come courting.
Gabe and Virginia are wonderful together!  They have witty banter and loads of sexual tension that I thoroughly enjoyed.  Even though Virginia despises Gabe she freely admits to finding him attractive and openly enjoys watching him work bare chested on her farm.  Gabe is very charming during this time and as he gets closer to Virginia he undergoes some subtle changes.  He starts wearing color and racing is no longer a priority, Virginia is.  Once they finally come together, their sexual interlude is hot and the give and take in that scene is indicative of their relationship throughout the story.
The secondary characters are equally entertaining.  Virginia's cousin Pierce is outspoken like her and he finds particular joy in goading Gabe by professing his love for Virginia.  At every turn he goads Gabe and there were many laughable moments with him.  Gabe's grandmother is a strong-willed woman who wants what's best for her grandkids and seeing her find love with Virginia's grandfather who's equally outspoken made for a sweet secondary story.  They too had great verbal banter so I can see where Virginia and Gabe got it from.  Gabe's sister Celia was another memorable character with her outspoken ways and hints of anger directed towards Mr. Pinter, the man helping investigate her parent's deaths.  With her story being next, I sense a possible connection between the two of them.
With so many wonderful moments in this book, the only disappointment was the mystery.  Not a lot of headway was made in this book in regards to finding the real murderer and the scenes devoted to it were a bit jarring.  These scenes felt out of place and felt a bit like a commercial break taking us away from the great romance.
I found this to be a very enjoyable read with a strong hero and heroine with great chemistry.  The slow burn of their relationship was full of sexual tension and kept me waiting with baited breath for them to get together.  The secondary characters were equally entertaining and added an interesting layer to the story.  I look forward to the next book in the series and will definitely go back to read what I've been missing.
My rating for this is a B+
at December 10, 2011