There's a sexy new sports team making women's hearts flutter and courtesy of Goddess Fish Promotions and author Cassandra Carr I am introducing you to them today.  In her release, Head Games, Cassandra takes us into the world of professional hockey and two teammates who share more than playing time.  Cassandra is here today to talk about sports heroes and is letting me host two giveaways.  So make sure to read this entire post to find out how to enter since these giveaways will end tomorrow night.  And now, here's Cassandra talking about the current popularity of sports heroes in romance.....


Athletes as heroes in romance is growing more and more popular. With major writers like Susan Elizabeth Phillips and Jaci Burton writing highly-successful series featuring athletic heroes, I got to thinking - what's turning romance readers on to athlete heroes? I've got a couple of theories, mostly based on why I love to write and read about athlete heroes.
First, athletes tend to be alpha males. There are, of course, exceptions to this rule, but by and large an athlete isn't going to make it all the way to the pros without having a take-charge, competitive attitude. And from the beginning of the written words, romance readers have adored the alpha male.
Second, though we all know it's not necessary for every romantic hero to have gobs of cash, it is nice to fantasize about living the good life when reading a romance novel. As a writer, I can tell you it's all kinds of fun to pick out fancy cars and awesome houses for my hockey player heroes. ;-)
Third, sports have a lot of built-in drama. Can the athlete stay on top? Will they be injured? Traded? Sports, by their very nature, are great breeding grounds for conflict in a story.
What did I miss? Why do you like athlete heroes? 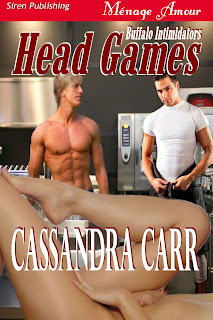 Head Games by Cassandra Carr
Leo Laporte and Scott Schaeffer are teammates on the ice and roommates off it who also share women. They’ve been coming into Kelly Chase’s bistro after games for months, and they know they want her. As the attraction grows, the men realize they want more than a one-night stand - they want forever.
Kelly’s not so sure. Yes, she wants both men. But a permanent ménage relationship? That’s taking giving her heart away to a whole new level, and a chance she’s hesitant to take. Then Leo is injured and Scott’s on the trading block, and she realizes this may be her only shot at true, everlasting love.
There are so many questions swirling around inside Kelly’s head. Can she believe in Leo and Scott’s love? And will her business and her reputation survive once people find out she’s with two men?


EXCERPT:
“Okay, so let’s go over everything again – make sure we’re on the same page here,” Leo urged.

“All right. Can’t hurt. We need to present a united front if we’re gonna do this.”
“Exactly. So both of us want her.” They’d been attracted to Kelly since the moment they’d laid eyes on her, but had come to the realization a few months ago that their feelings ran deeper than simple lust.

Scott nodded; his eyes as determined and focused as Leo had ever seen them. “Yes, we both want her, and the only way that will work is if we share her. But we need to make it clear at some point, maybe not right up front, that we want her more than just sex.”

“And we think tonight is the night?”

“Yeah, and did you see the expression on her face? She wants it.”

“I think so, too. But don’t forget. We can’t push her too hard. And everything one of us does affects the other. We can’t let her tear us apart and if this thing starts to do that we need to reconsider.”

“Agreed,” Leo answered. He held up his fist. “Even now, even with Kelly, bros over hos, man.” The two men did a quick fist bump and Leo relaxed a little.

A few minutes later Kelly backed out of the kitchen, her arms laden with plates, and both men paused to admire her in her tight chef’s pants. She caught them staring and just shook her head, laughing.

Yes, they were done waiting for her to come around. It was time to put Operation Seduction into action. 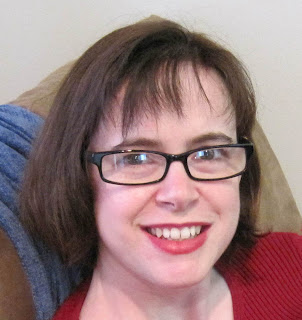 **********GIVEAWAY**********
There are 2 giveaways I'm offering.
*One giveaway is for a winner's choice of a $10 GC to either Amazon or Barnes & Noble going to one randomly drawn commenter from the entire blog tour.
*The other giveaway is strictly related to my site and is for a set of signed Romance Trading Cards given to one randomly drawn commenter who comments below.
-To be entered in both giveaways just leave a comment below answering the question in bold that Cassandra asked at the end of her guest post, along with your email addy.
-For the tour wide giveaway, the more tour stops you comment on the greater your chances of winning.  For a list of tour stops go here.
-My giveaway is open for those in the US.
-The tour wide giveaway is OPEN TO ALL.
-Both giveaways end at 11:59 PM CST on 12/30.
at December 29, 2011