Before we get to my interview with Keta Diablo, I want to thank Bewitching Book Tours for letting me be a part of this tour.  So let's learn about Keta's book Holding On To Heaven by spending a few moments chatting with her.....

TSP:  How did you get where you are today with your writing career?  And if you couldn't be a writer, what else could you see yourself doing?

KD:  I started out like many writers, one page at a time. When I go back and look at my first manuscript now, I have the urge to burn it. Lol. Learning the craft of writing is a slow, complex process. Most people rarely have success with their first book, and chances are, the book shouldn’t have been released to begin with.  Writers walk a solitary path. That is, we spend hours and hours alone. First one needs to be okay with that aspect. I got where I am today (wherever that is) by reading everything I could in the genres I write, by studying the different aspects of writing, i.e, passive voice, point of view, character development and a whole lot more.

If I had to choose another profession, I’d would be something in the creative field—a singer, a journalist or something like that. It’s the Sagittarius in me.

TSP:  What's an average writing day like for you?

KD:  Another laugh. I don’t have “average” writing days. I’m a night owl, always have been. Most of my serious writing is accomplished late at night or in the middle of the night. I sleep late in the morning and wake up to an inbox full of messages. After I take care of answering those and the business side of things, I shower, dress and go for a walk, weather permitting. Then I buckle down and write.

TSP:  The majority of your books are in the romance genre (with differing degrees of heat and couplings), so is there another genre that you'd like to try writing in?

KD:  I love reading historical romance so I guess it’s normal I keep gravitating toward the genre. Historical is a hard sell unless you write for one of the big six publishers in New York. I like to combine historical with paranormal. Some great eras exist for paranormal like Gothic, voodoo, ghost and magic. I write gay fiction at times. Strangely, this isn’t my main genre, but these books always do very well in the market. Many publishers have told me I since they do so well, I should write Gay Fiction all the time. My Crossroads series of four Gay Fiction novellas have been solid sellers and although I really love to read and write Gay Fiction, my heart is with historical. (More information here about the Crossroads series on KINDLE: http://www.amazon.com/ketadiablo/e/B002BODURI)

TSP:  What can you tell us about your book, Holding On to Heaven?

KD:  Thank you so much for asking. Holding On To Heaven and Dark Night of the Moon (the sequel) take place during an intriguing yet horrific era in American history, the Civil War. I love writing about this time period and wish there were more novels written about the Civil War. The Dakota Sioux uprising also took place during this time in the Midwest. I brought that into both novels based on factual events of the time. Holding On To Heaven is the story about identical twins, Lauren and Sage, who were separated at birth under mysterious circumstances. They grow to adulthood living contrary lives, never knowing the other existed. Through a series of fateful events, they meet up twenty years later in Holding On To Heaven.  Their story, and the story of the men they love, is continued in Dark Night of the Moon. coming to a Kindle and Nook near you January 1st.

TSP:  Before this book, you've written others that take place around The Civil War.  Is this time period of particular interest to you (like it is for me-with visions of Scarlett O'Hara running through my brain)?

KD:  Yes, see above. I loved, loved Gone With The Wind and some of Rosemary Rogers’ books that take place in the American West. My novel Land of Falling Stars also takes place during the Civil War, and again, the plot is quite unusual. LOFS has received over 40 five-star reviews and has been nominated many times for Best Book of the Month, Top Reviewer’s Pick and Recommended Read. (More about Land of Falling Stars here on Kindle: http://amzn.to/w4Vlga)

TSP:  When you write a m/m story is there a different mindset or way of writing that's different from a m/f story?

KD:  This is a great question. Think of it this way: When women argue or have a disagreement, a lot of emotion is involved and expressed through various methods, whining, crying, compromising, and more. When men have a disagreement they’re quite up front about what’s bothering them. I liken it to raising two boys and one girl and comparing their behavior as children. Let’s say my daughter had a disagreement with a friend. When I’d ask her about it, I’d get the run-around or excuses. This is quite typical for girls I think. When my sons had a disagreement, I might ask them, “Did you take that boy’s truck away?” Nine times out of ten they would answer with the truth, “Yes.” Men don’t appear to get into a banter of words when they’re unhappy. They want to confront the problem head-on, either through physicality or direct commentary. When one writes male/male, it’s important to keep this in mind—get inside their heads—and not handle the scene from a woman’s point of view. They just don’t go through life like women when it comes to relationships, emotion, etc. That’s my take on it.

TSP:  What qualities make a good literary couple?  Are the qualities different depending on the sexes of the couple (ie. m/m or m/f)?  And who's your favorite couple in your books and in someone else's?

KD:  Whether it’s female/male or male/male the number one component has to be chemistry. Attraction is really not a thing of the heart, but an actual brain chemistry that exists between two people. For a couple or a story to be convincing, that has to exist. How many times have you read a review with a mention of “lack of chemistry” between the main characters? It’s the writer’s job to make sure your hero and heroine or hero and hero have that natural chemistry between them.

I like Morgan’s and Olivia’s relationship in my novel Decadent Deceptions. The book is being expanded right now and a new cover has been made, a sexy, hot cover. Decadent Deceptions is another historical that includes voyeurism, a serial killer and a flip-flop on the marriage of convenience plot. Olivia is supposed to enter into a marriage of convenience, but spends most of the book trying to figure out how she can snare Morgan, a man she’s loved since childhood. By the way, Decadent Deceptions finaled in the prestigious RWA Molly Contest. (Watch my Amazon Author page for the book's new release date: http://www.amazon.com/ketadiablo/e/B002BODURI or follow my romance blog, Keta’s Keep, http://ketaskeep.blogspot.com)

TSP:  What do you think about the digital revolution and how it affects your writing and how you market yourself?  And have you jumped on the bandwagon and bought an eReader?

KD:  Like many authors I’m excited about the terrific rise of ebooks on the market, but I’m also cautious. It goes without saying that anyone can now publish a book on Kindle or Nook, and the writer doesn’t have to have experience in writing. In fact, it could be that very first novel I mentioned above. In this respect, I’m caution. I think it’s a writer’s inherent duty to deliver quality content to readers. That includes not only a great story but solid editing. Anyone can tell a story on paper, but the real test is whether a person can WRITE a story in a way that draws the reader in, keeps them turning the pages, and thinks about the book long after they’ve put it down.  Time will tell is the content in ebooks meets these standards.

TSP:  What's up next for you with new releases or any WIPs you can tell us about?

KD:  Again, thank you for asking. I love to talk about the books I’m writing now. I have a series coming out in 2012 called the LONE STAR SERIES. Set in Texas, of course, these novellas involve the Texas Rangers, a family of five Bannister brothers, paranormal elements and HOT, STEAMY sex. The first novella should be released by March and is titled Waking The Dead. The second novel hopefully will be released in June and is titled Wounded Sky and the third sometime in the Fall and is titled Hear The Thunder. All three novellas will include Native American mysticism, including skin walkers, ghosts and spirits. Stay tuned!

KD:  Ah, easy: soy candles, scented bath oil salts, books, flowers and stationary. Those are the physical things I love. The emotional things I love are my family, of course, my biggest supporters.

Thanks for taking the time to answer my questions and I'd love to visit with you again in the future!  Have a very happy holiday season and good luck with your future releases.  You're awesome!

Jody, thanks so much for hosting me. You’re questions were superb. I really enjoyed chatting with you. Wishing you a wonderful Holiday too and may all your future reads take you an memorable journeys. 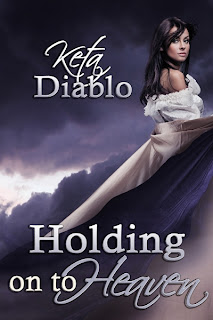 Holding On To Heaven
By Keta Diablo

When the blazing fires of revolt ravage the countryside, Lauren and Sage McCain are trapped amid the flames of destiny. The Civil War has crumbled a Nation, and the Dakota Sioux uprising has turned southern Minnesota into a violent battlefield.

Holding on to Heaven is a story of love between two men and a woman, love between siblings, and love that crosses all boundaries and forges all cultures.

Many of her books, including her gay fiction series CROSSROADS, have won numerous awards: Top Reviewer's Pick, Recommended Read and Best Book of the Month.

If you'd like to know more about Keta and her latest releases, she haunts the Net here:


**********GIVEAWAY**********
Keta is graciously offering up a digital copy of a BOOK OF THEIR CHOICE from her library (anything but Holding on To Heaven or Dark Night of the Moon) to one lucky commenter.  You can visit her blog, Keta’s Keep, to see what books are on the market right now.
-OPEN TO ALL.
-Just leave a comment, along with your email addy, to be entered.
-Winner will be chosen using random.org and will have 48 hours to respond to my confirmation email or another winner will be chosen.
-Giveaway ends at 11:59 PM CST on 12/19.
at December 17, 2011