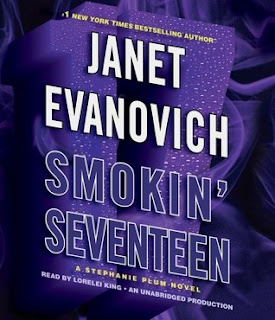 Where there’s smoke there’s fire, and no one knows this better than New Jersey bounty hunter Stephanie Plum.

Dead bodies are showing up in shallow graves on the empty construction lot of Vincent Plum Bail Bonds. No one is sure who the killer is, or why the victims have been offed, but what is clear is that Stephanie’s name is on the killer’s list.

With a cold-blooded killer after her, a handful of hot men, and a capture list that includes a dancing bear and a senior citizen vampire, Stephanie’s life looks like it’s about to go up in smoke.


********************
With Katherine Heigl bringing Stephanie Plum to the big screen this weekend I thought it appropriate to post this review of the 17th outing of the world's worst bounty hunter, Stephanie Plum.  In this outing everyone's a bit out of sync after the complete destruction of Vinnie's Bail Bonds office in the previous book.  Forced into working out of Mooner's marijuana-reeking trailer, Stephanie and Lula once again drive through the streets of Trenton looking for their next bounty.
The formula for this book and the series as a whole is pretty straightforward and similar from story to story.  These books aren't read for their cutting edge storylines or thought provoking themes, they are strictly comfort food.  You know Stephanie's latest car will go up in flames, you know Lula's going to be on another wacky diet, you know Grandma's going to cause a scene at a funeral, and you know Stephanie will still be torn between two sexy men....the reliable Morelli and the mysterious Ranger.  Even knowing all these things you can't help but want to join in the fun.
This series still brings the laughs, and even though I look forward to those sexy tension-filled scenes between Steph and her men, it's those scenes with Stephanie and Lula that keep me entertained.  These two ladies are a laugh riot, a modern-day Lucy and Ethel.  They're the perfect pair and even if Steph never chooses which man to be with, as long as she's with Lula riding into the sunset I'll consider it a HEA.
Morelli and Ranger still make my mouth water with both of them having very appealing qualities where I can understand why Steph can't choose.  In this book an extra male is thrown into the mix with a quality that Stephanie can't ignore, he's a great cook and she finds herself intrigued by him until things start getting a little crazy.  Once the craziness kicks in the story picks up speed with an exciting race to the finish.
All-in-all I still find myself entertained by Stephanie Plum.  I don't buy the books immediately upon release, but I'm still drawn to the series and will keep reading until the very end.  I can admit that there are some consistent flaws in the series and that the love triangle needs to be settled soon, but the comedic moments between Stephanie and Lula and anytime Grandma opens her mouth still leave me satisfied and with a smile on my face.
My rating for this is a B.
at January 28, 2012