Review for Permanent by Megan Slayer 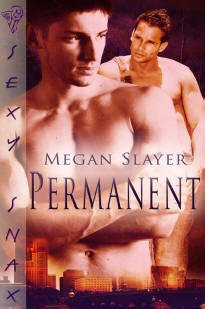 River Cortland trusted the person he loved. His faith couldn’t protect him from the bitter sting of a cold-hearted Domme. If he’s going to learn to trust again, he’s got to deal with his past. His roommate and best friend, Tory, has seen the physical damage and hasn’t walked away. Can he deal with the emotional scars as well?

Tory McClellan wanted the carefree life...until one night with River changed everything. There’s more to the shy art teacher and Tory wants to know everything-how he tastes, the scent of his skin, the feel of his body as they make love. What terror lies behind River’s brown eyes? Better yet, how can Tory make the sadness go away and be in River’s life, permanently?


********************
This is a very intense read about two men, roommates and lovers, with a lot of baggage struggling to make a lasting relationship.  I was at times sad, angry, and frustrated by the actions of River and Tory but after the final page I found a sense of satisfaction.
River enjoys being submissive, but after his domme misuses his trust in the most violent way, he's scared to open himself up again.  No amount of therapy has gotten him past his fear, not even the unconditional love of his pet cat has put his mind at ease.  I felt such sympathy for River.  Not only are there physical scars but mentally he's still struggling and I ached for him.  He's kept things locked up for so long I was on pins and needles waiting for him to talk about what happened.
River needed someone supportive and at times that person was Tory.  He treated River gently at times but would then use crass humor.  He wants to have a relationship with River, but doesn't want to have anything serious.  His mood constantly ran hot and cold and made me quite frustrated with him.
With River just wanting someone to love him, this causes many issues and spats between them.  The spats were silly and added to my frustration but thankfully weren't dragged out for too long.  And at least their make-up scenes were sexy and steamy.  Whatever problems they had out of the bedroom were definitely put aside during their sexual interludes.
Even though I was left frustrated that those who hurt River never receive punishment, at least River felt a sense of resolution.  I felt drawn to River and ached for him.  He was a kind-hearted person who didn't deserve to be hurt for admitting his desires.  I'm pleased he found strength.  I just wish he'd found a more likable person to spend his life with.  I have no doubt Tory cares about him, I just wish he'd be more supportive in a demonstrative way.  I enjoyed this story and was drawn into everything that happened.  I would love to see these characters again and anytime Ms. Slayer wants to revisit them I'll be there.
My rating for this is a B-
*This book was given to me by the author in exchange for my honest opinion.
at January 11, 2012