Review for Blacker Than Black by Rhi Etzweiler 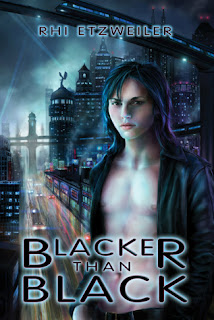 Apparently, my twin and I are two of York’s most notorious criminals. We’ve been Nightwalkers in the blue-light district since the vamps took over the world. Don’t know how many years it’s been. Long enough that a stream of fellow ’walkers have come and gone. Most don’t last long selling their chi. End up face-down in the gutter, or worse.

For us, one night and one sale change everything.

Monsieur Garthelle is the first john to hunt me down. He calls me a chi thief in one breath and offers absolution—servitude—in the next. Maybe I’m a sucker, but I like living and breathing. Strange that such a powerful vamp would show leniency to a mere human. And something’s not right with the chi I took from him. It won’t go away.

Neither will he, and he’s forcing us to spy on his peers. Then a vamp turns up dead, and we go from playing eyes and ears to investigating a murder. This isn’t what I signed up for. All I ever wanted was to sell a little chi, maybe steal some in return. I should’ve kept my damn hands to myself.

This is my story. Look through my eyes.


********************
This is Rhi Etzweiler's first solo novel and considering it's nice flow, intriguing characters, vivid world imagery, and fresh take on the vampire mythos it definitely won't be the last we hear from her.  Etzweiler has created a future world that is dark and bleak where a hierarchy of vampires (lyche is her term) rule the cities and humans are left to struggle to survive anyway they can.  For many, that means selling their souls on the streets as Nightwalkers to any lyche who chooses them.  For Black and his sister Jhez they've lasted much longer than the usual Nightwalker and as the story unfolds the reader discovers there's more to them than meets the eye.  As they become entwined in lyche politics their lives are put in danger and the truth about them comes to light and changes their future forever.  Throw in a sexy yet conflicted lyche by the name of Leonard Garthelle and you have a story that keeps you on the edge of your seat until the final page is turned.
What first impressed me about this story was its vivid depiction of a world on edge.  Where Black and Jhez live is a forlorn city reeking of no hope, amongst other smells.  It's dark and depressing and those who struggle to cope there have to do many unsavory things to survive, often losing their emotions along the way.  Black and Jhez show a strong bond with one another though.  They often hug and will do anything to keep the other safe.  They're all that's left of their family and the only other person allowed in is Blue.  Blue has plenty of issues of his own with a cloud of mystery surrounding him.  He's the local drug dealer and has seen plenty of bad things in his life barely hinted at.  The three of them are interesting to see together and the strong bond of love they have.  Black and Blue (the Bruise Brothers) appear weak throughout the story with momentary flashes of raw unexpected power.  Jhez is badass to the core though with her flippant words and cocky attitude and I greatly enjoyed seeing her cope in the new world they find themselves in amongst lyche royalty.  I look forward to seeing more of her in the future and the man strong enough to take her on.  Blue also greatly intrigued me.  He suffers so with the constant barragement of noise in his head and the reasons behind this will have my mind whirling until his story is told.
Monsieur Garthelle of York, Leonard to a very few, is in charge of the city and is looking for chi thieves who are stealing energy from his fellow lyche.  He finds Black and is immediately drawn to him.  Once they share chi he blackmails Black and Jhez into helping him with an even bigger problem in the lyche hierarchy and those trying to usurp the balance.  Leonard is extremely sexy and mysterious and the sexual tension between him and Black is off the charts.  The few sexual interludes they had made my heart pound and left me wanting more.  Leonard's kept secrets for so long and been alone forever that it's hard for him to deal truthfully with Black who he's really starting to care for.  Seeing him struggle to admit his feelings and be open with Black made me ache for him.  Having him not only accept Black into his heart and family but Jhez too made me like him even more, since others of his ilk would have nothing to do with Mutts like them.
I enjoyed the fresh take on vampirism that Rhi presents.  Having individuals share energy instead of blood felt more dangerous to me.  Being drained dead like a battery and having your soul drained completely spoke volumes to the kind of world these characters live in.  Sharing chi also makes for a stronger bond and felt more sexual to me since it's through touch that the transfer occurs.  The more skin exposed the more chi can be transferred.
From start to finish I was fully invested in this story.  While I could have done with a bit less political intrigue and had more focus put on the relationship between Black and Leonard, I still found the flow to be pleasant.  The ending section is a bit hurried with a very open ending that I hope gets picked up from again soon.  The sexual tension is palpable throughout but with very few blatant sexual interludes, which I would have liked to have had more of.  The secondary characters of Jhez and Blue really grabbed my attention and I so hope we have their stories told soon since the anticipation is killing me.  Blacker Than Black was an entertaining story with a memorable world that I look forward to visiting again soon and recommend you do too.

*I received this book from the author in exchange for my honest opinion.
at January 29, 2012