There's an exciting new book recently released that caught my attention and made me want to give you a glimpse of it.  Courtesy of Bewitching Book Tours I'm able to bring to you Deadly Obsession by Kristine Cayne...... 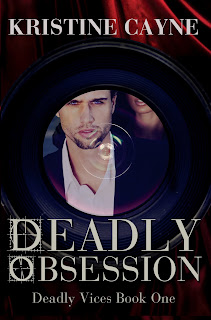 Deadly Obsession
Deadly Vices Book 1
By Kristine Cayne
When an Oscar-winning movie star meets a department-store photographer…
Movie star Nic Lamoureux appears to have a playboy’s perfect life. But it’s a part he plays, an act designed to conceal a dark secret he carries on his shoulders. His empty days and nights are a meaningless blur until he meets the woman who fulfills all his dreams. She and her son are the family he’s always wanted—if she can forgive a horrible mistake from his past.
A Hollywood dream…
Lauren James, a widowed single mother, earns barely enough money to support herself and her son. When she wins a photography contest and meets Nic, the man who stars in all her fantasies, her dreams, both professional and personal, are on the verge of becoming real. The attraction between Lauren and Nic is instant—and mutual. Their chemistry burns out of control during a photo shoot that could put Lauren on the fast track to a lucrative career.
Becomes a Hollywood nightmare
But an ill-advised kiss makes front-page news, and the lurid headlines threaten everything Nic and Lauren have hoped for. Before they know what’s happening, their relationship is further rocked by an obsessed and cunning stalker who’ll stop at nothing—not even murder—to have Nic to herself. When Nic falls for Lauren, the stalker zeroes in on her as the competition.
And the competition must be eliminated.
EXCERPT:
Lauren rolled her eyes. “Fine. Do it.”
Nic bent down and brushed his lips against hers. For the first few seconds, she didn’t kiss him back, but she didn’t push him away, either. Then, on a sigh, she leaned into him and her arms locked around his neck. His tongue darted out to taste her bottom lip. Mmm… cherry—his new favorite flavor. When her mouth opened, he didn’t hesitate.
He dove in. And drowned.
He’d meant this to be a quick kiss, only now he just couldn’t stop. His lips traced a path to her throat. Cupping her bottom with his hands, he lifted her up, grinding against her. She moaned. It was a beautiful sound, one he definitely wanted to hear again.
A loud noise pierced the fog of his lust. He raised his head from where he’d been nuzzling Lauren’s apple-scented neck to tell whoever it was to fuck off, but as the sexual haze cleared, he swallowed the words. The paparazzi had gathered around, applauding and calling out crude encouragements. Some snapped photos while others rolled film. Shit. He’d pay for this fuck-up and so would she.
ABOUT THE AUTHOR:

Kristine Cayne is fascinated by the mysteries of human psychology—twisted secrets, deep-seated beliefs, out-of-control desires. Add in high-stakes scenarios and real-world villains, and you have a story worth writing, and reading.

The heroes and heroines of her Deadly Vices series, beginning with Deadly Obsession, are pitted against each other by their radically opposing life experiences. By overcoming their differences and finding common ground, they triumph over their enemies and find true happiness in each other’s arms.

Today she lives in the Pacific Northwest, thriving on the mix of cultures, languages, religions and ideologies. When she’s not writing, she’s people-watching, imagining entire life stories, and inventing all sorts of danger for the unsuspecting heroes and heroines who cross her path.