Review for Her One-Night Prince by Rebecca J. Clark 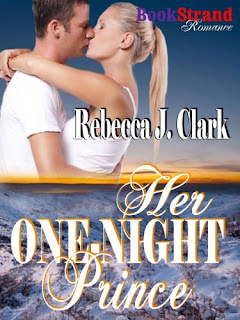 Her One-Night Prince is a Cinderella story about a woman's dream to be something she's not for just one night at her class reunion. As all fairy tales go, however, happy endings don't come easily. Shy and sheltered Lydia St. Clair is uncomfortable around men, so she advertises for a gay man to be her date and revamp her style. Mitch Gannon answers Lydia's ad, and he's perfect for the job--he's handsome and, even more important, he's charming. Unbeknownst to Lydia, Mitch is straight and answered the ad as the unwitting victim of a practical joke. Before he can reveal the truth, Lydia is convinced he's her fairy godmother, ready to transform her into the belle of the ball. And Mitch, prince that he is, doesn't have the heart to set her straight.


********************
This is a wonderfully written sweet story that fulfills every little girls dream, especially this little girl.  From the memorable characters put into realistic situations to the slow burn of friends to lovers, I was caught up in this story from start to finish.
Lydia St Clair is a loving daughter and highly responsible woman which has left little time for doing things for herself.  I could respect her way of living and found bits of myself in her way of thinking.  All she wants at the moment, other than caring for her father so he doesn't go to a nursing home, is to prove to her former high school classmates that she's no longer that awkward ugly duckling the popular kids once called her.  Trouble is, she's still awkward and unstylish.  Hence her brilliant idea to have a Queer Eye make-over from a gay man and have him act as her reunion date.  The lessons she received made me ache for her struggle to succeed.  To see her constantly second-guessing herself and feeling like a failure made those moments of success and happiness all the sweeter.  Lydia was someone that truly deserved happiness and it brought a tear to my eye when she finally got what she wanted.

Mitch Gannon accidentally answers Lydia's ad and even though he thinks she's an unpleasant prude at first glance, there's just something about her that draws her to him.  He once lived his life like Lydia, full of seriousness all the time, never taking time for himself.  He's turned over a new leaf and now is a writer and bar owner.  Therefore he sees it as his mission to get Lydia to relax too.  And since he feels guilty over not being able to take her to the reunion, he gives her lessons to be more comfortable in public and around men.  Unfortunately, to keep her calm in his presence the lie about his sexuality remains.  But as they interact he grows more and more attracted to her and desperate to tell her the truth.  The lies keep adding up as Lydia's father Robert wants Mitch's help in finding a suitable nursing home to move to behind Lydia's back.  And as the reunion draws nearer truths come out and a blossoming relationship might end before it barely starts.  I found Mitch incredibly charming in his interactions with Lydia.  He was extremely sexy but never acted arrogant about it.  His problem lies in his committment issues and fears of gaining responsibility again.  But once he realizes what he truly wants, the grand gesture he makes is one that made me clap.

This was a sweet romance with some heavy petting and kissing that still made my toes curl.  The sexual tension generated by Lydia and Mitch was off the charts and equal to books with even more blatant sexual acts.

The secondary characters added to the drama and certainly stood out.  In particular, Lydia's father Robert left a lasting impression on me.  He's been left with physical impairments and issues surrounding a head injury that have left him reliant on his daughter.  We see glimpses of him struggling with his disability but he's no less spry because of it.  He's outspoken and plays matchmaker to Lydia and Mitch using some hilarious methods.  I adored him and would have loved to see even more of him!

This was a wonderful, feel-good story that flowed at a nice pace with a truly likable couple you root for every step of the way.  The romance was sweet and very satisfying and reading it fulfilled all those youthful dreams of a Cinderella ending.  I highly recommend this to anyone wanting a story that leaves a smile on their face long after the final page is turned!


My rating for this is an A!


*I received this book from the author in exchange for my honest opinion.
at January 21, 2012