Review for Crash Into You by Roni Loren 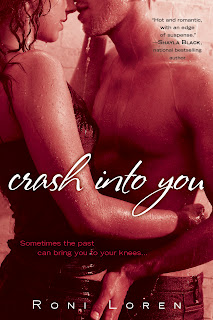 Brynn knows what attorney Reid Jamison is like once stripped of his conservative suit and tie. Years ago she left herself vulnerable only to have him crush her heart. Now she needs him again. Back on top. And he's all too willing to engage. But as their primal desires and old wounds are exposed, the sexual games escalate-and so does the danger. Their hearts aren't the only things at risk. Someone else is watching, playing by his own rules. And his game could be murder.


This is the debut novel of Roni Loren and by how well-written and nicely flowing the story was I would never have guessed that this was Ms. Loren's first book.  The story is intriguing with a lot of spice and a bit of mystery and I found myself fully immersed in Brynn and Reid's relationship from the first sentence.

Brynn had a hard life growing up with a mother who's an alcoholic prostitute.  She was forced to take on the role of responsible adult since her mother was incapable.  Not only did she care for her mother but her younger sister too, a role that she retains today.  She knew from the moment she met Reid that they were from two different worlds with no hope for a future together.  His charming nature wore her down though and just when their relationship seemed possible outside forces intervened to pull them apart in a most horrific way.  But she now needs Reid's help in finding her sister which will put them in close contact with each other at a BDSM retreat where she'll have to work past her inner demons to make their plan a success.

The story is set up in an interesting way where glimpses of their past together are interspersed with their current interactions.  The transitions are smooth and I enjoyed seeing how their relationship evolved.  It gave interesting insight into the forces that got them where they are now and drew me wholeheartedly into their relationship.  Both of these characters were very likable and it was heartbreaking seeing them ripped apart by villainous people.  Their relationship was loving yet super steamy in the bedroom.  The sexual interludes were nicely spaced throughout the novel and were creatively spicy.  One particularly steamy encounter involved a three-way between Brynn, Reid, and their friend Jace and left a lasting impression on me where Jace is concerned.  I'd love to see more of his character and am excited that his story will be told next in the Loving on the Edge series.

The villains in this story are fairly well hidden and are truly vile creatures.  Between them and a fast-paced storyline full of intense moments and steamy encounters this story kept me on the edge of my seat from start to finish.  For those wanting a fully-developed storyline with likable characters in a world full of harsh realities look no further than Crash Into You by Roni Loren and plan on purchasing the sequel since you too with fall in love with Jace.

*I received this book from the author in exchange for my honest opinion.
at January 12, 2012