Review for A Bite's Tale: A Furry Fable by Veronica Blade 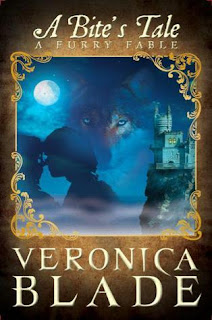 A Cinderella who spends her nights as a wolf. A prince with a taste for blood.

Seventeen year old Cydney struggles against her werewolf nature, trying to keep everyone around her safe. No way will she risk exposing the beast at the prince’s ball, no matter how her two cousins try to persuade her. Even as she attempts to get on with her life, Cydney can’t forget the boy she loved three summers ago — or what she did to him after losing control.

Turned into a vampire to save his life, the prince refuses to live up to his royal duties. He just wants to find the girl he loved and lost...the werewolf girl who bit him. But his father, the king, commands him to attend a ball where he must choose a wife. Can he find his Cinderella before he's forced to marry another? He doesn’t even have her real name, much less a glass slipper.


********************
As a reader who's not a big fan of the YA genre (except for a few titles) there was just something about this book that called to me.  From its likable characters to its unique spin on the Cinderella story I was drawn into an intriguing world where paranormal creatures have an island/country where they can live in peace.  With its nice combination of romance, political intrigue, and action I can see a long life full of stories based in this world.
The love between a prince and a werewolf starts innocently enough with clandestine meetings every summer with neither sharing their real names.  As time goes by and their teenage hormones kick in, one life altering kiss has consequences neither anticipated.  Since that event, Cydney doesn't trust that she can control her shift and fears for the safety of those she loves which has led to her cutting herself off from living life to the fullest.  I admired Cydney and found her reactions to the event to be realistic.  Her actions and dialogue were believable for a teenager and her emotions swayed from putting up a tough facade to doubting everything about herself.
Remy too was likable and the connection between them was soul deep and sweet as sugar with a nice bit of heat as they've gotten older.  The event that pulled them apart changed his life forever but he never forgot the red headed girl of his dreams.  When they finally reunite at the Ball it's like no time has passed as they immediately fell back into their own private world.  Remy's under a lot of pressure to learn how to be King but with Cydney those worries vanish.  Their scenes together were sweet, romantic, and made my heart ache.
The secondary characters were memorable with each of them being reminiscent of those in the fable but much nicer.  There's no wicked stepmother or stepsisters in this story.  Along with an entertaining cast of characters is a nice bit of action to bring the story to its conclusion.  A conclusion that's a little too easily wrapped up with a villain who's a bit too obvious.
This was a fast and pleasant read that appealed to me for many reasons.  The world Ms. Blade created is an intriguing one ripe with even more possibilities.  Knowing what this author is capable of makes me excited for her future works and gives me another good reason to read YA.
My rating for this is a B+
*I received this book from the author in exchange for my honest opinion.
at April 04, 2012

Email ThisBlogThis!Share to TwitterShare to FacebookShare to Pinterest
Labels: books, paranormal, review, YA