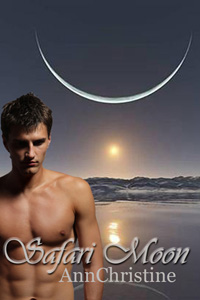 Solo St. John, a wildlife photographer, is preparing for a trip to Alaska. Suddenly, Solo finds women of all sorts invading his privacy, his home, and his office-cooing nonsense words and blatantly throwing themselves at him. Solo doesn't know why and he has no idea how to rid himself of the persistent women. He finally decides to beg a favor of his best buddy, Nyssa Harrington.

Nyssa has been in love with Solo for the past ten years, but knows he doesn't return her feelings. Tired of being only a buddy, Nyssa decides to move on with her life- without Solo. If she gives in to one last favor, will Nyssa resist temptation? Or will she fall in love all over again?


********************
Friends to lovers stories are among my favorite storylines as I enjoy the foundation that is established between a couple and seeing that segue into something stronger and more romantic.  For Solo and Nyssa that transition to lovers is a bumpy journey due to manipulative family members, but once they finally start being honest with themselves a whole new chapter in their lives can begin.
With such a promising synopsis there's a lot to like about this book but one or two things that weighed the story down a bit in my eyes.  I enjoyed the easy camaraderie between Solo and Nyssa and all the adventurous things they did together that brought them closer together.  Solo knew he could rely on her no matter what and even though she knows she shouldn't she's drawn to him and the excitement he offers everytime.  Considering the way Nyssa lives her life now she needs Solo's adventurous way of living to keep them on an even level.  Their interactions as friends were comfortable and caring and now as lovers the sexual interludes are sexy and even more caring and romantic.
The issues I had were small and involved secondary characters.  Solo's friends were rather mean when talking about Nyssa and it made me wonder why Solo put up with it for so long before finally putting them in their place.  Robert, Nyssa's fiancee, also left a bad taste in my mouth.  He was domineering and I'm not sure what Nyssa saw in him.  At least he redeemed himself in the end.
This was an entertaining read that requires you to wholeheartedly suspend belief.  The true enjoyment comes from a plan put into action that seems harmless at first but gains comedic momentum to a satisfying conclusion.  Don't think too hard, just enjoy the ride.
My rating for this is a B-
*I received this book from the author in exchange for my honest opinion.
at April 03, 2012