Review for Fearless by Cheryl Douglas 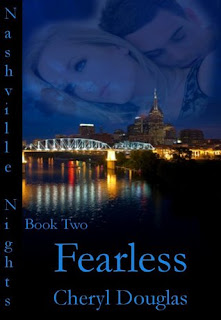 Lexi Brooks has overcome adversity to build a successful real estate business that will enable her to enjoy life on her terms. She envisions travel, fun, and excitement, not marriage, kids or commitment. But will Trey's sexy bodyguard, Josh, throw a wrench into her plans?

Being a cop taught Josh Cooper to take calculated risks, but he's tired of living with the daily threat of danger. He's ready to settle down with someone who wants to be a step-mother to his two teenage sons. Too bad Lexi isn't that woman. She's sexy, smart, head-strong, and they're totally in sync in the bedroom, but she isn't willing to settle for a life of domestic bliss. Or is she?

After reading the first book in this series, Shameless, I knew this was a series that would become an autobuy for me.  With its intriguing characters and with emotions running high in the music city capital I found myself fully immersed in the lives of these friends and families.  While this story is more flawed than the previous installment, it's still an enjoyable read that sets up one or two interesting premises for future books in the series.

In Fearless, the emotional rollercoaster ride continues for friends, and wannabe lovers, Lexi and Josh.  Both of these people have been burned in their previous relationships which makes them a bit hesitant, especially Lexi whose previous relationship was full of physical and emotional abuse.  While Josh wants to remarry and have a family, the only woman who he can see in that role is Lexi who definitely wants to stay single and unencumbered.  She's willing to have a friends with benefits relationship but that's not enough for him and he doesn't want to ruin their friendship by carrying on that way, so they're at an impasse through almost the entire book.  Their understanding, once it finally comes, happens rather suddenly and ends up being rushed through at the very end.

The issues keeping this couple apart are pretty standard in romance novels, so the emotional impact wasn't as affective as the problems plaguing the couple in the previous book.  Josh was an immensely likable character, sexy and strong and great with his teenage sons.  His actions and frustrations throughout the story were believable and easily relatable.  His sexiness was especially evident during their sexual interludes which were intense and made me wish there were more of them.  My biggest problem with the story lies with Lexi and her actions.  I'm sympathetic to the pain she endured but I don't feel she entirely learned from her past.  She became strong in body but her choices in men and how she conducts herself really annoyed me at times.  First, to not confide in her family and friends, knowing that they too could be in danger from a psycho didn't sit well with me.  Second, and the biggest issue for me, came when she immediately trusted a guy she just met in a bar to travel with her and stay at her home just the two of them.  It's quite obvious this man is there for nefarious reasons and before long his storyline evolves into utterly ridiculous and highly annoying and left me even more irritated with Lexi.

The secondary characters in this story were likable and it was nice revisiting the couple from the previous book and how they're still an intregal part of the story.  Josh's twin teenage sons were particularly well-portrayed with a realistic vocabulary and actions.  Lots of couples are still in limbo and with a big secret being revealed a big can of worms is now open and has me excited to see the effect that this will have in future books.

While this story paled in comparison to the previous book, there's still plenty of enjoyment to be found.  This group of friends and family are appealing with realistic issues affecting their lives.  The hero in this book was to die for with many qualities that any woman would kill for.  It's easy to get caught up in the emotional rollercoaster of the Nashville Nights series and I'm waiting with bated breath for the next installment.

*I received this book from the author in exchange for my honest opinion.
at April 26, 2012