Review for Crazy on You by Rachel Gibson 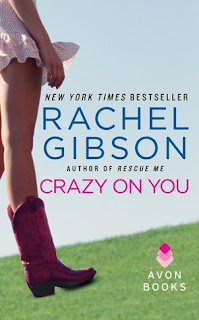 Return to Lovett, Texas, the setting of Daisy's Back in Town, in this smart and sexy new story from Rachel Gibson, the New York Times bestselling author of Rescue Me and the Seattle Chinooks books.

Lily Darlington's been called crazy in her day-and, yeah, driving her car into her ex-husband's living room probably wasn't the smartest move ever made-but the louse deserved it. Now Lily is happily single, and she's turned it all around. She knows she's a good mom, a homeowner, and a businesswoman, all wrapped up in one good-looking package.

A package that police officer Tucker Matthews is dying to unwrap. This ex-military man sure doesn't need another woman in his life. His last girlfriend left him with nothing but memories and a cat named Pinky! But living next door to Lily has been driving him nuts. He dreams about her long blonde hair and even longer legs. And maybe it's time to go a little crazy . . . and fall in love.


********************
When it comes to small town living, not many authors can give the town a personality of its own.  Rachel Gibson is just such an author.  Many of her books take place in small towns where the different residents add an intriguing aspect to the main couples' relationship for better or worse.  In this charming novella based in the world of a previous book, Daisy's Back in Town, we're reintroduced to single mom and former high strung town bad girl Lily Darlington.  Lily's now on the straight and narrow, being a successful businesswoman and dedicated parent, and doesn't want to do anything to jeopardize her new mature reputation.  Dating the town's new police officer, Tucker Matthews, who's eight years younger just might make others think she's back to being troublesome which makes her second guess their exciting and sexy blossoming relationship.  It takes the love of a good man to convince her that a little crazy can be a good thing and that love knows no age restriction.
I found this story very enjoyable with a likable, easy to relate to heroine and a charming younger man who's had a life devoid of family and affection.  Lily used to be known as a wild child, but with her son Pippen getting older she knows she now has to be a role model since her ex is still in an immature phase.  She doesn't want to be thought of as a cougar no matter how drawn she is to Tucker.  When she ultimately gives into their attraction the sexual interludes are extremely hot and nicely flow throughout the story.  Lily would be content keeping Tucker secret to keep the town's tongues from wagging but he doesn't like secrets.  Tucker is admirable, mature, and responsible, the complete opposite of Lily's ex.  He wants to be part of the family Lily has created, to share in the love.  I ached for the lack of love he had growing up and the loneliness he's lived with since he was a child.  He deserved happiness and Lily brought a spark of excitement to his regimented life that was greatly needed.  Their scenes together were the perfect blend of sweet and sexy and often left me with a smile on my face.
Even though this novella is part of a series and has a shorter length, I never felt lost or that the story was lacking in any way.  It was a delightful way to spend the day with its entertaining characters, nice bit of humor, and small town living like I grew up with.  Rachel Gibson has created a pleasantly sweet morsel of fun and I eagerly await the next visit to Lovett, Texas.
My rating for this is an A-/B+
*I received this book from Edelweiss and Avon Addicts in exchange for my honest opinion.