I recently had the opportunity to read and review this unforgettably intense story and am proud to bring a more in-depth look at it to all of you today.  You'll get a glimpse at the main character Jonathon through an interview and also get a sneak peek at the next book in this series.  And as if all that weren't enough to get excited about, there's also an awesome giveaway for a classic Nook pre-loaded with six books from Riptide Publishing's library of books as well as winner’s choice of one backlist book and/or author swag from Cat or Rachel to one lucky commenter from this blog at the end of the tour.  So let's get this party started......

Today we’re talking to Jonathan Watkins, a Silicon Valley genius who first came to public attention at the age of eighteen, when he invented the world’s first $100 computer. By the time he was twenty-five, his company SuperComputing was listed near the top of the Fortune 500. He currently serves as Chairman of the Board at SC and CEO of the Watkins Foundation, whose missions range from bringing computers to every classroom in the world, to saving the oceans from global warming.
1)    You’ve had a number of submissives in the past, both male and female. What specifically attracted you to Brandon?
He was . . . almost majestic, sitting there on that barstool. *laughs* That probably sounds absurd, I know, what with him hunched and miserable over his warm beer. But truly, he just radiated strength, and determination, and power. And he was clearly in so much pain, and while I know on the surface it seems like I’d rather prefer that, the truth of it is that a good Dominant often plays therapist, and we like it—we want to help people find their true selves, reach their true potential, be happy and comfortable with themselves.
2)    You’re a sadist, but Brandon is most definitely not a masochist. Can you tell us about the challenges in dealing with this kind of incompatibility?
I do think there’s a touch of the masochist in him—he enjoys a gentle flogging, or a few good thwacks on the ass during sex, or the edge of my teeth here and there—but mostly, no, he is not. Certainly not among the ranks of the pain sluts I normally end up with. So of course then the biggest challenge is how to make it good for both of us, when I want so very badly to make him scream and he really rather wishes I wouldn’t.
In the end, I think we’ll find a nice balance that brings his deeply submissive desires very heavily into play. He may take no pleasure from the suffering itself, but he is a submissive right down to his little toenail, and when he learns to embrace that, he’ll come to take joy in suffering for me. And of course I always take extra care to reward him for that, to let him know how much it means to me, how much I value it, how proud he makes me. Aftercare is a big component of our heavier play—he needs to be soothed and coddled after he’s given so much of himself, and I’m quite happy to do that for him.
3)    You had a pretty public divorce a few years ago, where your wife hinted at some of your kinkier tastes in the bedroom. How did you deal with this information becoming public knowledge?
I must say I was mortified for quite a while. It was something of a dual betrayal, you understand—not only was the woman I still loved more than anything leaving me, something I have to admit I was too naïve to see coming at the time, but she was leaving me publicly, nastily, airing all our laundry for the world to see. And the world was very much watching, too. I’d thought I’d gotten used to being in the public eye, but that was a whole new level.
Things were pretty rough for a while there, and I wasn’t always able to shrug it off and hold my head up high. But I met Devon then, and he took me under his wing and taught me not just to love myself as I was but also to be proud of myself as I was, kinks and all. It was truly a life-changing gift he gave me.  I could never possibly express my gratitude enough.
4)    You and Brandon appear to have come to a tenuous understanding at the end of Power Play: Resistance. Where do you see your relationship going? Any hope of a happy ending?
I’d like to think so; I’d not have let him stay on if I didn’t believe we could have such a thing. I don’t know how compatible we’ll be in the end, but I see the potential in Brandon and I do believe I can help him reach it. Where it goes from there, who knows, but there is no denying the feelings I have for the man—infuriating and difficult though he may be sometimes—or how very much I’d love to see him come into himself, his submission, his inner strength, and how privileged I feel at the thought of him sharing all of that with me. 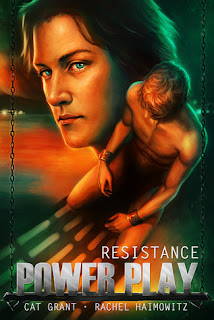 POWER PLAY: RESISTANCE by Rachel Haimowitz & Cat Grant
Give me six months, and I'll give you the world.
Brandon McKinney has scraped and sacrificed for what little in life he’s ever had. Though it’s been fifteen years since he escaped his father’s abuse, the damage remains. Trust seems as far out of reach as his dream of becoming an architect, and though he’s come to accept being gay, he can’t deny the shame and confusion he feels at other urges—the deeply-repressed desire to submit.
Jonathan Watkins is a self-made Silicon Valley billionaire whose ex-wife took half his money and even more of his faith. Comfortable as a Dominant but wary of being hurt again, he resorts to anonymous pickups and occasional six-month contracts with subs seeking only a master, not a lover.
When a sizzling back-alley encounter cues Jonathan in to Brandon’s deep-seated submissive side, he makes the man an offer: Give me six months of your life, and I’ll open your eyes to a whole new world. Brandon doesn’t care about that; all he wants is the three million dollars Jonathan’s offering so he can buy the construction company he works for. But he soon learns that six months on his knees is no easy feat, and shame and pride may keep him from all he ever wanted—and all he never dreamed he had any right to have.
You can read an excerpt and order Power Play: Resistance here. 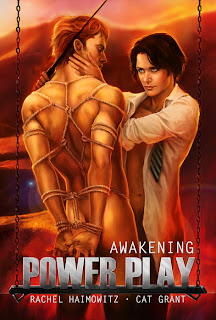 The next release in the Power Play series, Power Play: Awakening, will be released June 11th and can be purchased here.

When she's not writing about hot guys getting it on (or just plain getting it; her characters rarely escape a story unscathed), she loves to read, hike, camp, sing, perform in community theater, and glue captions to cats. She also has a particular fondness for her very needy dog, her even needier cat, and shouting at kids to get off her lawn.

You can find Rachel at her website, Tweeting as RachelHaimowitz, chatting in the Goodreads forums, and blogging at Fantasy Unbound. She loves to hear from folks, so feel free to drop her a line anytime at metarachel (at) gmail (dot) com.

EPIC Award–winning author Cat Grant lives by the sea in beautiful Monterey, California, with one persnickety feline and entirely too many books and DVDs. When she's not writing, she sings along (badly!) to whatever's on her iPod shuffle, watches lots of movies, and fantasizes about kinky sex with Michael Fassbender.

Where to find Cat:

**********GIVEAWAY**********
Prize is a signed paperback from Cat or Rachel (any of their Riptide titles other than Power Play) and/or author swag at the end of the tour.  They are also giving away a classic Nook pre-loaded with six titles from the Riptide Publishing library at the end of the tour.
-To be entered, MUST leave a comment, along with your email addy.
-One commenter will be chosen randomly from all comments made throughout the tour, so the more tour stops you make a comment on the greater your chances of winning.  A list of all participating blogs can be found here.
-Giveaway ends at 11:59 PM CST on 4/18.
at April 10, 2012