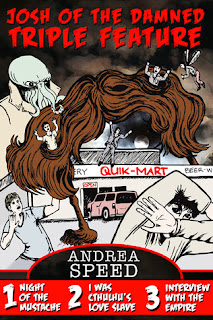 What most people call a hellish shift, Josh Caplan calls a normal evening. After all, he works nights at a convenience store beside the mouth of hell, selling snacks to zombies and lizard men.

Some monsters are odder—and more dangerous—than most. Like the rampaging, oversized mustache who skips the Pringles and eats the customers instead. Or Cthulhu’s half-brother Stan, who doesn't know how to take no for an answer . . . or where to put all those tentacles.

Fans of Andrea Speed's Josh of the Damned series will find this an intriguing addition to the story seen thus far.  For those unfamiliar with this world you'll get an eye-opening glimpse of the humor and adventure Josh and his sometimes-lover vampire Colin experience anyday of the week.

This book contains three short stories and involves three different battles against intriguing baddies that gives off a B-movie feel with plenty of action and wonderfully snarky humor.  That humor comes courtesy of Josh who's taken a job working at a convenience store next to a hell mouth and for reasons unbeknownst to him he's considered special in this paranormal world.  There's a sense of wide-eyed innocence amongst all his snark and I found Josh utterly delightful and entertaining, along with that mysteriously hot Colin.  Together they just click and their back and forth banter added to the entertainment.  Their romantic interludes were sweet with a bit of sexiness and the short snippets of this part of their relationship had me longing to see more.

This was a wonderfully entertaining read that invites you to sit back and enjoy it for what it is, an exciting trilogy of action and humor that unleashes a few secrets.  It's the perfect summer movie flick in book format and a fun extension to the world Andrea Speed has already introduced readers to and an entertaining enticement to new readers.

*I received this book from the author in exchange for my honest opinion.
at April 29, 2012