Book Spotlight on Bad For Her by Christi Barth

A man whose choices caught up to him has the chance for a new life in this just-released small town romance brewing between him and a doctor longing to find something new in the town she’s lived in her whole life.  Keep reading to get a tempting taste of Bad For Her by Christi Barth, with its sexy and suspenseful romance, then add this first installment in the Bad Boys Gone Good series to your bookshelf too! 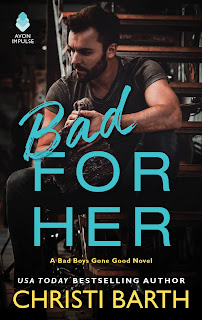 Doctor Mollie Vickers loves the tight-knit community of her tiny Oregon town. But she’s not a fan of the limited dating options. Sleep with a guy who tried to copy off her in junior high? Pass. Mollie’s sex life is flatlining… until a deliciously handsome man she’s never seen before stops to help her fix a flat tire.
As an ex-mobster, Rafe Maguire’s no saint. But he’s trying to turn over a new leaf. Although he probably shouldn’t kiss the hot doctor on the side of the highway. Or suggest a no-strings fling with a woman he has no business pursuing. Rafe’s life is too complicated for love—his new WITSEC-provided identity doesn’t fit him at all and there’s a U.S. Marshal watching his every move. He can’t tell Mollie the truth… but their chemistry is scorching and being good doesn’t mean he can’t be a little bad.
Mollie can’t resist the guy who looks rough, talks tough, and is loyal to the bone. But it’s obvious Rafe is keeping secrets. When the truth comes out, Mollie must decide if she could ever love an ex-mobster… or if this bad boy has truly gone good.

Every time they’d been dumped in a new town, the Maguire brothers made a list of all the ways the new town sucked compared to Chicago. Rafe didn’t like much about this new placement. Probably. Hell, he’d only been in Bandon for forty-eight hours. It’d rained for forty-seven of those hours, here on the Oregon coast. Seemed like everyone always bitched about the constant rain, and Rafe was happy to jump on the bandwagon. Even though it just made puddles, which cleaned themselves up. As opposed to the annual or three epic Chicago blizzards that broke your back with two solid days of shoveling out.
Rafe stopped himself. That wasn’t the happy, perky mindset Marshal Evans preferred. The one he’d promised her—again—an hour ago when he’d picked up the final version of his brother’s new license. It’d pissed him off to have to meet Delaney halfway between her office up in Eugene and his town. But it kept their cover secure. And part of him felt sorry for the government hack who’d spelled Kellan’s new name wrong the first time around. Guess they changed ’em so often it was hard to keep track. Hadn’t stopped his youngest brother from being pissy about the slipup, though.
The good thing about the almost pointless drive was his sweet-as-fuck ride. The one he’d conned the government into buying for him by pointing out that it cost less than an actual new car. Rafe had a sweet spot for classic cars. If he truly had to hunker down and build a life here? He’d damn well do it with his dream car.
A 1970 Chevrolet Camaro. With T-tops. The same blue as Lake Michigan on an August day.
Rafe wasn’t even speeding. For once. It was too much fun to listen to the smooth rumble of the engine, feel the cool May wind rushing in the open windows, and not worry about anything waiting for him back in their new town. No worries about remembering his name or his brothers’ names. No worries about doing a job he’d only played with as a hobby for fifteen years. No worries about whether anyone from their old life was on their trail.
For right now, he’d enjoy another half hour of pure freedom. The only thing that could make this better would be a hot blonde in the bucket seat next to him.
Hang on.
Rafe slowed. Then he stomped on the brakes. Because a Jeep sat half off the shoulder with a dark-haired woman kicking the flat tire.
A curvy brunette would do just fine.
It’d be wrong to drive past. Ungentlemanly. If Marshal Evans were here, wouldn’t she tell him to do his civic god damned duty and help his fellow Oregonian?
Sure she would.
Parking right at the nose of her Jeep, he got out. Tried to appear non-menacing. Which was the complete opposite of how he’d approached pretty much every situation for half his life. Hell, even the women he’d dated had known what he did and gotten off on the idea of his dangerous life.
The marshal had given him some pointers on how to come off as normal. One thumb tucked into the waist of his jeans, so it didn’t look like his fist was braced for action. Other arm relaxed at his side. She’d said something about a loose walk, but Rafeonly knew one way to walk. To be safe, he stopped almost immediately.
“Hey there. Do you need some help?”

USA TODAY bestseller Christi Barth earned a Masters degree in vocal performance and embarked upon a career on the stage. A love of romance then drew her to wedding planning. Ultimately, she succumbed to her lifelong love of books and now writes award-winning contemporary romance.  Christi can always be found either whipping up gourmet meals (for fun, honest!) or with her nose in a book. She lives in Maryland with the best husband in the world.