Readers will find themselves drawn to this epic love story full of edge of your seat action and set in a fantasy-fueled world.  Keep reading to get a tempting taste of the historical romance Highland Dragon Rebel by Isabel Cooper, then count down the days until its November 7th release date.  In honor of this second installment in the Dawn of the Highland Dragon series make sure to fill out the form below for the chance to win 1 of 3 copies of the first book in this series too! 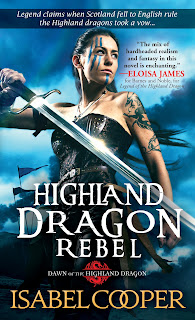 By wing, by claw
By fire, by death
So long as dragons rule the skies, Scotland will forever be free.
After a long and bloody war, Scotland has finally won its independence. But Highland dragon Moiread MacAlasdair knows peace balances on the edge of a blade, and she will do anything to keep her homeland from falling to English control.
Even if that means escorting a powerful new ally into the otherworld itself…and defending him with her life.
Madoc of Avandos is on a critical mission to cement alliances against the British. Powerful men would kill to see him fail—but as he and his fiercely beautiful warrior fight their way through hostile lands, Madoc is faced with a difficult choice: sacrifice everything for the cause…or let himself burn for the love of a dragon.