Spotlight on Third Son’s a Charm by Shana Galen (GIVEAWAY)

Fans of Regency romances will find themselves captivated by this exhilarating tale of a former soldier whose job of bodyguarding a duke’s daughter leads to complications and unexpected love.  Keep reading to get a tempting taste of Third Son’s a Charm by Shana Galen, then count down the days until this book releases on November 7th.  In honor of this first installment in The Survivors series make sure to fill out the form below for the chance to win a prize pack of books from Ms. Galen’s backlist and a wine charm too! 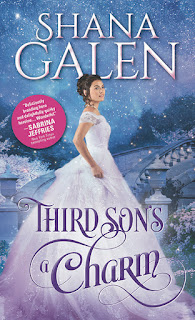 Ewan Mostyn thinks a job as a duke’s daughter’s bodyguard will be easy—but Lady Lorraine has a few tricks up her sleeve that spark an undeniable passion.
Fiercely loyal to his friends and comrades, Ewan Mostyn is the toughest in a group of younger sons of nobility who met as soldiers and are now trying desperately to settle back into peaceful Society. Ewan trusts his brawn more than his brains, but when he’s offered a job watching the Duke of Ridlington’s stubbornly independent daughter, he finds both are challenged.
Lady Lorraine wants none of her father’s high-handed ways, and she’ll do everything in her power to avoid her distressingly attractive bodyguard—until she lands herself in real trouble. Lorraine begins to see Ewan’s protectiveness in a new light, and she can only hope that her stoic guardian will do for her what he’s always done—fight for what he loves.

Shana Galen is the bestselling author of fast-paced adventurous Regency historicals, including the RT Reviewers' Choice The Making of a Gentleman. Booklist says, "Galen expertly entwines espionage-flavored intrigue with sizzling passion," and RT Bookreviews calls her "a grand mistress of the action/adventure subgenre." She taught English at the middle and high school level off and on for eleven years. Most of those years were spent working in Houston's inner city. Now she writes full time. She's happily married and has a daughter who is most definitely a romance heroine in the making.