Readers looking for a sweet romance full of heartwarming moments and depicting one woman’s journey of starting over will find this a compelling read.  Keep reading to get a tempting taste of Inked Hearts by Lindsay Detwiler, along with my impressions of it, then get ready to be charmed by the immensely appealing characters.  In honor of this first installment in the Lines in the Sand series make sure to fill out the form below for the chance to win two signed print copies of this book too! 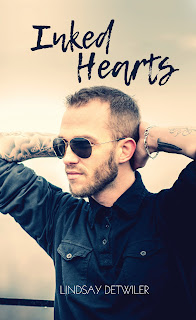 “Six years, a complex about my freckles, a love for pastrami, and a fear of failure. That’s what he gave me before slaughtering my heart and my faith in men.”
Suffering from the sting of betrayal, twenty-eight-year-old Avery Johannas quits her job and moves hundreds of miles away to Ocean City, the beach town of her dreams. With the help of her zany roommate, Jodie, Avery finds a new career, home, and freedom. Throughout her self-exploration, she makes only one rule: She won’t give her heart to a man again. She’s living for herself this time.
But then she meets Jesse.
A tattoo shop owner, the green-eyed Jesse Pearce is wild with a touch of mystery. As Jesse and Avery explore Ocean City and their friendship, they’ll have a hard time drawing a line in the sand between their hearts.
When summer nights get a little more heated than either expected, they’ll have to ask themselves: Can they let go of their notions of love, or will their hearts be permanently inked by past pain? 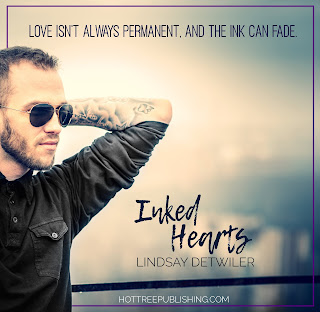 From its message of starting over to its beach setting, Inked Hearts is the epitome of a summer read.  It’s a carefree read with a sweet romance and a journey of empowerment for a woman caught off guard by the end of her marriage.  With its colorful characters and engaging storyline it’s a romance that kept me on the edge of my seat in frustration waiting for the heroine to decide where her happiness lay.

Avery Johannas thought she had the perfect life with a career she’d worked hard for and a man who seemed picture perfect until the day she found out her husband found their life lacking.  Leaving it all behind she decides to make a fresh start on the beach and live a life completely unplanned and not contingent on any man.  From meeting her loud and brash roommate to finding a job at an eclectic restaurant, her life is definitely changing.  Meeting the sweet and sexy Jesse catches her off-guard though and brings all her fears to the surface. Fears of not being good enough and of being left alone all over again has their friends-to-something-more relationship moving at a snail’s pace.  Jesse pushes her to try new things and to embrace her artistic side, supports her in a way that neither her ex nor her parents have done.  His sweet side, and all the little things he does to show he cares, soon has her heart becoming invested.  When her parents make a surprise visit, and make a surprise offer, she’s left conflicted and in doubt once again.  Avery’s a likable young woman whose reaction to discovering a cheating husband is very realistic.  She needed a fresh start where there were no expectations from others.  It’s a much simpler life she finds, a life not near as glamorous or wealthy as that she left behind, but it’s much more satisfying.  She makes new friends who quickly become family and who don’t judge her for the choices she makes.  Readers learn a lot about Avery through internal commentary that’s full of heartfelt emotions and subtle humor.  Readers will be a bit frustrated though by her wishy-washy nature when confronted by her father’s offer.  Her decision was clear from the start and her doubts made for unnecessary drama.  Despite that I still rooted for Avery to embrace her HEA as her journey to finding empowerment was an immensely satisfying one.

Jesse Pearce came to the shore to fulfill a dream.  It wasn’t entirely his dream at first but it’s one that he now finds satisfying.  Coming from a childhood of heartache due to his mother’s abandonment, and his father’s early death, has left him a bit cautious.  After an ex’s betrayal he’s become even more cautious which makes for a very slow-moving relationship with Avery.  Despite fears for his heart he becomes a big supporter of Avery and pushes her outside her comfort zone.  He helps her embrace her artistic side as he’s been given the chance to embrace his.  He lets her set the pace in their friends-to-lovers relationship while being sweet and sexy every step of the way.  He’s the quintessential book boyfriend, almost too perfect at times, and with all his tats I wish there’d been a bit of roughness to him.  He’s a nice guy who’s willing to sacrifice for Avery’s happiness and through all his words and deeds he endeared himself to me.

This was a sweet romance full of heart and a message of empowerment. Avery’s a likable heroine who left her picture perfect life behind after seeing how tarnished it really was.  Her new life though is carefree and full of supportive people who care for her unconditionally.  Sexy tattoo artist Jesse is part of that supportive group and a drool-worthy hero who did and said so many dreamy things that made him perfect.  Together they were a sweet couple who took their time getting to know each other.  Their romance was cute with heartwarming encounters that ended with a closed bedroom door.  Surrounding this cute couple were an eclectic group of secondary characters who immediately embraced Avery.  They were an outspoken lot and pushed her towards her HEA without remorse.  Among the most outspoken was her roommate Jodie who had her own heartbreaks, but never let it get her down for long.  She was larger than life but with a heart of gold who embraced Avery from the very start as her sister and always gave her words of wisdom.  She’s an immensely likable and memorable character who deserves her own HEA and I hope the author feels the same.  This is a satisfying read overall, a bit slow throughout the middle section, with a romance that was a very slow burn.  The characters were worth rooting for though in a story that left me cheering by the turn of the final page.

An English teacher, an author, and a fan of anything pink and/or glittery, Lindsay's the English teacher cliché; she loves cats, reading, Shakespeare, and Poe.
She currently lives in her hometown with her husband, Chad (her junior high sweetheart); their cats, Arya, Amelia, Alice, Marjorie, and Bob; and their Mastiff, Henry.
Lindsay's goal with her writing is to show the power of love and the beauty of life while also instilling a true sense of realism in her work. Some reviewers have noted that her books are not the “typical romance.” With her novels coming from a place of honesty, Lindsay examines the difficult questions, looks at the tough emotions, and paints the pictures that are sometimes difficult to look at. She wants her fiction to resonate with readers as realistic, poetic, and powerful. Lindsay wants women readers to be able to say, “I see myself in that novel.” She wants to speak to the modern woman’s experience while also bringing a twist of something new and exciting. Her aim is for readers to say, “That could happen,” or “I feel like the characters are real.” That’s how she knows she's done her job.
Lindsay's hope is that by becoming a published author, she can inspire some of her students and other aspiring writers to pursue their own passions. She wants them to see that any dream can be attained and publishing a novel isn’t out of the realm of possibility.