Readers will find themselves quickly consumed with this tale of opposites attracting as a former soldier, broken by his past and looking to be left alone, captures the unwanted attention of a sweet and kind young woman.  Keep reading to get a tempting taste of Rescuing Bryn by Susan Stoker, with its suspenseful tale of unexpected love and overcoming disability, then add this sixth installment in the Delta Force Heroes series to your bookshelf! 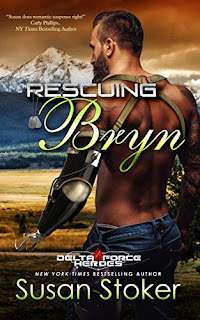 When you're a Delta Force soldier, you see a lot. Often too much. But nothing can ever prepare you to see your entire team die before your eyes...
The loss of his Delta brothers--and his arm--has Dane "Fish" Munroe still struggling months later. He's moved to Idaho, where an isolated lifestyle is making things worse, not better. Not that there's anyone left to care.
Actually, Bryn Hartwell cares. In fact, she tries to surreptitiously make life just a little easier for the mysterious man who comes into the grocery where she works late at night, only to get a tongue lashing for her trouble. Still, he's obviously hurting; someone has to worry about him, spurring Bryn to nurse Dane when he hits a particularly low point.
Intrigued by the quirky, kind, socially awkward woman, Dane allows himself to get close to someone for the first time in ages. A potentially epic mistake--because when her interest in the prepper lifestyle puts Bryn in the hands of a homegrown terrorist, losing her could put Dane's mental recovery permanently out of reach.
But once a Delta, always a Delta. And there's a team in Texas ready to have Dane's back at a moment's notice.

New York Times, USA Today, and Wall Street Journal Bestselling Author, Susan Stoker has a heart as big as the state of Texas where she lives, but this all-American girl has also spent the last fourteen years living in Missouri, California, Colorado, and Indiana. She's married to a retired Army man who now gets to follow her around the country.
She debuted her first series in 2014 and quickly followed that up with the SEAL of Protection Series, which solidified her love of writing and creating stories readers can get lost in.