A one-night stand leads to complications in this sensual and suspenseful romance that has a carefree woman finding an unexpected connection to a man who keeps his emotions hidden.  Keep reading to get a tempting taste of Temptation and Treachery by Sahara Roberts, along with my impressions of this book, then learn even more about this book by visiting the other sites hosting this tour.  In honor of this third installment in the Dangerous Desires series make sure to fill out the form below for the chance to win a $25 bookstore GC too! 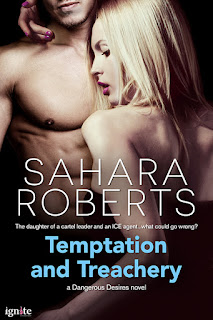 Andres “Rio” Rivera became his ICE profile years ago. Cold and calculating, he never promises anything beyond right now. But when he ends up with a cancelled flight and a shared hotel room with the secretive Celeste Patron, the fire behind Celeste’s buttoned-up exterior melts every barrier. He may only have her for one night, but that’s long enough to make her every fantasy come true.

Most people at the airport had looked right past her, or through her, but to him, she stood out from everyone else, in more ways than one. With her down-turned head and graceful manner she was the picture of innocence—which was a crying shame. He looked back just as her skirt did another one of those peekaboo things when she stepped out. Yeah, a crying shame. He couldn’t have stopped himself from looking if he tried.
Yanking back her hand, she shut the door and then pulled on her coat, missing the sleeve. Distracted, she caught her shoe in a tree root punching through the battered sidewalk. “Whoop—“
Rio reached out in a purely reflexive attempt to catch her. Every softly rounded curve he’d been itching to explore landed in his arms, settling against him. He held her and watched, fascinated, as she shuffled emotions across her face in a split second, like she’d done on the plane. Eyes widening in shock. Brows drawing together in embarrassment, then releasing as she discovered him pressing against her belly. And finally, her lips parting in a sharp breath.
He stiffened further, hard enough to separate them under any other circumstance. Meanwhile, little Miss Innocent stared at his mouth like he held the answer to life itself. He ran his thumb along her lower back. “You okay?”
She set her forehead on his shoulder but didn’t move. “I may never be okay again.” Her whispered confession held such a woeful note, he couldn’t help but burst out laughing.

A stormy night and an unplanned layover lead to an unforgettable one-night stand and unexpected consequences in this sensual and suspenseful romance.  It’s a rocky road between these apparent opposites as truths about a father lead to feelings of betrayal that put their HEA in doubt.  But with each new twist and turn readers will find themselves on edge until the turn of the final page and the immensely satisfying epilogue.

Celeste is a blogger who’s gained notoriety for posting pictures of hot guys on her website.  In real life she’s just your average girl, but as blogger Vix she’s the girl most likely to take a walk on the wild side.  When she notices yet another drool-worthy passenger on her flight her picture-taking will change her life in ways she never imagined.  Being stranded due to inclement weather sets her on a path of a one-night stand with the mystery man from the plane and an unexpected connection months later.  The moment readers meet Celeste we see an average heroine.  When Vix enters the picture though readers get to see a sex kitten who’s the more outspoken part of Celeste.  The narrative portrays her as a separate entity but her and Celeste are one and the same.  The Vix persona is a bit distracting, her inclusion a bit clunky, and as she vanishes in the latter half of the story it might have been better to not have included her at all.  The moment Celeste again sees her mystery man is on the day she learns some unpleasant truths about her father and the criminality of her family.  It leads to lots of internal conflicts that make her romance with the agent who took her father away even rockier.  I enjoyed that bit of conflict and had hoped that Celeste would become more vibrant as the rug was pulled out from under her but I never saw that spark.  She never became that memorable heroine, she just remained average. That doesn’t mean that I wasn’t rooting for her every step of the way though as her connection to the far more appealing Rio had me doing so for his sake.

Andres “Rio” Rivera is a man dedicated to his work, cold and calculating, and obsessed with bringing down a major drug kingpin.  He doesn’t tolerate distractions or commitments.  He’s a “one and done” kind of guy.  At least he was before, but his one-night stand with a fellow plane passenger changes his life irrevocably.  With Celeste he sees a glimpse of forever and someone he’s willing to sacrifice everything for.  He plans to keep in touch with her but she gives him the cold shoulder.  When they’re finally reunited it’s on the day he arrests her father AND discovers she’s pregnant.  It’s a day that complicates everything and leads to feelings of betrayal and doubt.  It also leads to more suspense and danger that has Rio putting his life on the line for Celeste as he works his way towards earning her forgiveness.  I liked Rio and found him to be the highlight of this story.  He was sexy and supportive of Celeste when she needed it most and he had all the qualities of the perfect hero.

From start to finish this was a story that kept me engaged.  It kept me fully invested in the outcome of this couple and their crackling connection and scorching interludes.  The suspense too was well done and added a few unexpected twists and turns.  Readers are also introduced to Rio’s teammates, a large assortment of characters, and though none stood out it’s good to know there’s plenty of characters with stories left to tell.  On a whole this wasn’t a perfect story.  It was a bit rough around the edges with a narrative that was a bit disjointed, but it still added up to a good romance that will have me coming back for more from this author.

Sahara Roberts caught the writing bug early in life. She enjoys writing Romantic Suspense and Contemporary Romance. Her days are filled with international trade issues (the legal kind) and her evenings writing steamy romance. She is currently working on the fourth novel in the Dangerous Desires series and plotting a contemporary romance series.
When she's not at her usual hangout, Savvy Authors, she enjoys socializing on Facebook, Twitter, Google+, Pinterest and her website, or watching APB, The Blacklist, and The Walking Dead (Following Daryl). Sahara lives in South Texas with her husband and a very spoiled cat. She enjoys cooking, baking, and cake decorating, but she would certainly prefer to have someone else do the dishes.