Book Review for Shining Through by Elizabeth Harmon 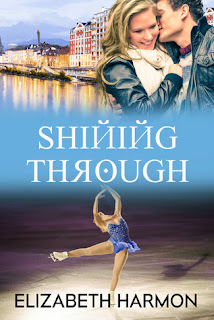 The Biggest Season of her Career...
America’s sweetheart Tabitha Turner is on track to win figure-skating gold in the Winter Games. Her family has sacrificed everything for her career, but the pressure is taking its toll. Burned out and living a lie, can Tabitha let off a little steam without melting the ice?
The Last Chance of His...
Russia’s bad boy of skating Daniil Andreev is determined to prove the toughest thing about him is his competitive fight. When Tabitha tempts him to help her take a secret walk on the wild side, he gives her a taste of the freedom she craves, never expecting that one unforgettable night could turn into something more.
Two Hearts on Thin Ice...
Chicago, Vancouver, Paris… the international figure skating season unfolds. Tabitha and Daniil compete and fall in love, but as the pressure mounts in a make-or-break season, can they set aside their painful pasts and spiral into a shining future together… or will their dreams shatter like thin ice?

Readers are once again pulled into the competitive world of ice skating in this fourth installment in the Red Hot Russians series that gives us a romance between the Golden Girl of skating and the bad boy just coming back from suspension.  It’s a sweet and sexy tale of opposites attracting that vividly details the ups and downs of skating, the sacrifices and mental pressures associated with a sport known for its artistry.  Add in a bit of melodrama that came out of left field and readers will be on the edge of their seats waiting to see if Daniil and Tabitha win gold at the Olympics as well as get their HEA.

Tabitha Turner’s road to gold has been a tough one from childhood.  The daughter of a single parent meant money was tight and the sacrifices many for their entire family.  Numerous moves, begging for ice time, and devoting herself to being the best made for a lonely life for Tabitha.  While her sister got to be the Wild Child, Tabitha constantly honed her craft and kept her reputation pristine in hopes of gaining endorsements and keeping her benefactor happy.  Seeing others living lives she longs for is starting to wear on her though and just as the most important year in her skating life begins she decides to take her own walk on the wild side.  The moment she saw Daniil Andreev on the ice she was obsessed.  He was every decadent delight she always wanted to sample and when one clandestine night of fun leads to friendship, he’ll be her guide to living life to the fullest.  With Daniil, Tabitha can finally be herself and fully express all her hopes and fears.  As their relationship takes a more sensual turn, she finds that love quickly becomes a distraction...but is it a distraction worth sacrificing her future for or will she let Daniil take the fall when vindictive individuals try to sabotage his chances of winning?  Tabitha’s a likable character who knows how much her family has sacrificed for her and is desperate to be successful so she can repay them for all they gave up for her dream.  Though her image of being the Golden Girl of skating will lead to endorsements she becomes resentful of that image as she longs to do more than just skate.  She wants to be like other young women and Daniil is just the person to help her experience everything she’s always wanted to try.  She knew of Daniil’s past and seemed to accept it, but when a disastrous performance has her lashing out she throws his questionable past  in his face which left me disappointed.  Her decision to keep their relationship secret started off with a reasonable excuse but as time went on I started to get annoyed with her for it.  For all the love and support Daniil gave her she threw his feelings back at him in a heartbreaking moment that she was able to luckily redeem herself from courtesy of a Grand Gesture.  For all the hard work she put in, for the admirable reasons she wants to succeed, I was left rooting for her every step of the way both on and off the ice to reach her HEA.

Daniil Andreev has a colorful past as the son of a model and a mafia don.  He started out playing hockey but started ice skating to embarrass his father.  There wasn’t a lot of love from his parents growing up, but there was lots of money which made things easy for him.  With money, and the need for attention, Daniil quickly came to be seen as the Bad Boy of the ice with lots of partying and women surrounding him.  It all eventually catches up to him though with a suspension and being cut loose from the support of the Russian Federation.  Wanting to be taken seriously he works his way back to the ice with a goal of getting Olympic gold.  The moment he sees Tabitha though he’s obsessed and becomes determined to make himself worthy of America’s Sweetheart in a journey of cutting ties with his past and finding HEA despite all the roadblocks that get in the way.  Daniil’s oh so sexy and surprisingly sweet.  He doesn’t rush Tabitha when it comes to his feelings for her, he’s happy to start off as her friend.  As they grow closer, heartfelt talks lead to secretive encounters as she has her own reasons for keeping him as her dirty little secret.  Those reasons saddened him and frustrated me which caused big problems later on in the story.  That wasn’t the only bump in the road late in the story for Daniil as a crime he’s charged with came out of the blue and felt a bit melodramatic.  It invaded the lovely romance brewing between the two of them and felt unnecessary to the storyline as there was already plenty of emotional angst weighing on the both of them.  On a whole I found myself enamored with Daniil and his bad boy persona that hid a heart of gold, who just wanted to be loved, and who I was cheering for from the moment I first saw him.

Daniil’s love of skating shines through in this story, and he’s just the thing Tabitha needs to find joy in skating once again.  This made their time on the ice together combustible in scenes teeming with sexual tension and happiness.  It’s clear Ms. Harmon knows a lot about ice skating as she vividly depicted all the ins and outs of competition and being in the spotlight.  Her love of the sport is more than obvious and kept me fully invested in these character’s outcomes in scenes that left my heart pounding each time they took off from the ice until they landed.  I enjoyed seeing skaters from past installments in the series and the feeling of family this sport engendered in all of them.  The romance between Daniil and Tabitha was sweet and sexy and was nicely balanced with the obligations of being an ice skater where it’s not always glamorous and people aren’t who they always appear.  This is another satisfying addition to the Red Hot Russians series and I hope that the author has many more books on the horizon as it’s a compelling series full of appealing characters and action-packed scenes on and off the ice.

*I got this book from NetGalley for review in exchange for my honest opinion.
at October 10, 2017