Book Blitz for Meeting His Match by Shannyn Schroeder (GIVEAWAY)

Readers will find themselves drawn to this tale of family legacies and hidden identities as two matchmakers vie to see who’s better at finding love.  Sparks fly as the romance heats up in this fun and flirty read.  Keep reading to get a tempting taste of Meeting His Match by Shannyn Schroeder, then add this scorching romance to your bookshelf.  In honor of this new standalone romance make sure to fill out the form below for the chance to win a $10 bookstore GC along with a signed copy of one of the books in Ms. Schroeder’s For Your Love series to a US reader too! 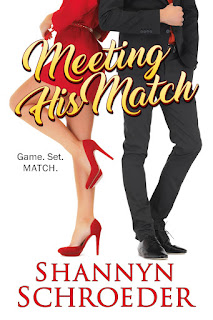 Malcolm “Mac” Sterling has one goal: take over the family matchmaking business. His final obstacle? Host his family’s new dating show and prove he can help each contestant find true love. One catch. Mac’s meddling mother has approved a co-host, a so-called expert who seems impervious to his charms. Now he could lose everything, because if his co-host proves she’s the better matchmaker, he can say goodbye to his legacy.
Natalie “Gem” Hale never intended for her alter ego as an online dating expert to get her the opportunity of a lifetime—or for that opportunity to come with a co-host who’s as infuriating as he is tempting. But she didn’t get this far by backing down from a challenge. All she has to do is keep her secret identity a secret.
Except as sparks fly and the competition heats up, Mac realizes his co-host is hiding something. He’s just got to figure out what.

Natalie had enjoyed her day away from TV and cameras and most of all Malcolm. At least she tried to, but then yesterday afternoon she’d received the message that Brad wanted to see her in his office first thing in the morning.
Her immediate thought was that he’d found out she’d crashed Malcolm’s party for Melissa. She spent the rest of her evening rereading her contract to make sure she hadn’t done anything wrong. She was in the clear. No breach of contract that she could find. So Malcolm could just suck it.
Before walking through the door of the studio, she applied a fresh coat of lipstick and fluffed her hair. Gem would not lose this contract. Natalie’s life was circling the drain a bit, so Gem had to hold it together.
In reception, she didn’t even get a chance to sit and relax to gather her thoughts. Malcolm leaned against the wall and smiled when he saw her. She tried to forget the last time she’d seen him. She’d wanted to invite him up to her place.
She’d tried to convince herself it was the alcohol she’d consumed and the fact that he’d been nice to her, but looking at him now, she knew better.
“Good morning,” he said, tucking his phone back in his pocket.
Damn. Even his voice was smooth. First thing in the morning. Life wasn’t fair.
“Is it? A good morning?” she asked. “Did you think that by tattling on me to Brad you’d get rid of me? Think again. I read my contract.”
He angled his head slowly and narrowed his eyes. “Tattled on what exactly?”
“That I crashed your party. What else?” Nat’s stomach flipped. What else indeed?
Malcolm pushed away from the wall in a smooth, graceful motion and stepped closer. He made Nat nervous with the movement. But nervous in a good way, like anticipation, which was horrible.
“You believe your little spying session worried me? I have nothing to hide.” He took another step, putting him as close as they had been the other night outside the bar.
Nat locked her knees so she wouldn’t move. The problem was she wasn’t sure if she’d step away or toward him.
He lowered his head, his mouth close to her ear, and spoke quietly. “How about you? What are you hiding?”
A shiver skated down her spine. “Nothing,” she whispered. Then she swallowed hard.
“They’re ready for you,” the receptionist called. “Conference room one on the left.”
Nat stepped away from Malcolm. This had to stop. She didn’t know what game he was playing, but she didn’t want to be a part. At least that’s what she kept telling herself.
Malcolm turned and held out a hand for her to go first. As she passed, his hand landed on the small of her back, right at the curve of her ass, like it had the other night. The touch caused a hitch in her stride, and she glanced at him over her shoulder, going for a haughty look.
She wouldn’t let him know the warm brush of his fingers made her heart race.
“Problem?” he asked.
“Not at all.”
They arrived at the room and Malcolm reached around her to open the door.
“Are you always a gentleman?”
He lowered his head again and she braced for the sensation of his breath on her skin. “Not always.” He paused for a blink. “But I do always allow a woman to go first.”
Nat clenched her teeth. Her mind raced at the innuendo and all the ways he would be a gentleman and when he wouldn’t. She inhaled deeply and walked into the conference room. 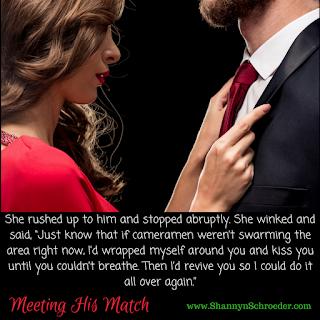 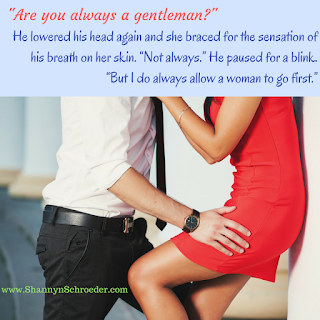 Shannyn Schroeder is the author of the O’Learys series, contemporary romances centered around a large Irish-American family in Chicago and the Hot & Nerdy series about 3 nerdy friends finding love. Her new series (For Your Love) currently has 3 titles out - Under Your Skin, In Your Arms and Through Your Eyes. When she’s not wrangling her three kids or writing, she watches a ton of TV and loves to bake cookies.