Readers find themselves pulled back into the gritty and emotionally intense world of the Satan’s Knights in this epic tale of redemption and the concept of what defines family.  Keep reading to get a tempting taste of From the Ruins by Janine Infante Bosco, along with getting my impressions of this tale.  You’ll also get a message from the author as well as learning even more about this book by visiting the other sites hosting this tour, then add this unforgettable romance to your bookshelf.  In honor of this next installment in the world of the Satan’s Knights make sure to fill out the form below for the chance to win a print copy of this book signed by the author and cover model and a $25 Amazon GC too!

From the Ruins by Janine Infante Bosco
Dear Reader,
Here we are again, off the heels of one epic ride and ready to embark on the next one.
Pipe’s story first came to me as I was writing Eternal Temptations and it’s taken some time to figure out who the woman that heals him should be. As it turns out, I didn’t have to look very far. All I had to do was look in the mirror.
Seems easy enough but when you’re telling a story that focuses on your own truth, you need to dig deep and find the courage to say what you’ve kept under wraps.
This story isn’t just about Pipe.
It’s about me.
It’s about Janine Infante Bosco telling you her truth.
It’s about finding a way to tell my story and move on when I’m still not certain I’m ready to.
Truth, I have been separated from my husband for two years.
Truth, divorce or in my case, separation---is ugly.
Truth, the children hurt just as much as the parents if not more.
Truth, it changes the way you interpret love.
Truth, it changes you.
It brings you down but you rise up and become better than you were before.
Stronger than you thought possible.
You learn to appreciate the little things and accept change.
My story isn’t over because one chapter has ended and you’ll find neither is Layla’s.
As always, I promise to give you a beautiful love story full of healing and unexpected surprises.
I will restore your faith in brotherhood and teach you family isn’t always about blood.
We’ll all be Property of Parrish in the end but first I’m going to torture you all a little.
Saddle up, the boys in leather are back!
The motherfucks will fly, people will die, you will cry and curse the day you ever heard of me.
The men are crass. They’re vulgar and they’re not scholars.
The Satan’s Knights are street guys who use slang and the grammar won’t be on point.
Some of your old favorites are back but if you’ve never read any of my books you will totally be fine. However, if the word fuck offends you—well, then this book isn’t for you.
If you’re cool with it then, let’s fucking do this!
Become part of this unconventional family.
Be
Property
Of
Parrish.
See you on the other side,
Janine 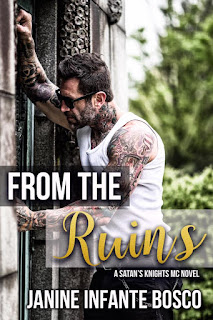 “Pipe”
In every man’s life there comes a day of reckoning. It’s the day darkness is exposed and sinners are punished for their trespasses.
A day when loyalty is destroyed and a man is left in ruins.
When he walks away from his club and loses his religion.
Whoever said from the ruins they will rise again never walked a mile in my shoes or the pair of red ones I was left holding.
“Layla”
He’s bitter, cold and angry.
He’s seen his share of heartache.
Lived through tragedy and despair.
He’s my neighbor.
The man I know should stay away from.
The man who will destroy what’s left of me if I get too close.
He’s Lee Jameson, and I’m Layla Milano.
This is our story.
The story of two people left in ruins forced to rise again. 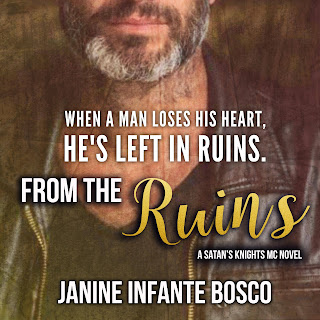 THE MUSIC BEHIND THE STORY...

When last we saw ”Pipe” he was a broken man.  In the blink of an eye a bomb took his wife and left him questioning the price he paid in the name of brotherhood.  He turned his back on the men and women he once called family and left his past behind to wallow in misery and wait for the end.  Things don’t go as expected though when a newly-divorced woman with three children invades his solitude and has him discovering a new definition of family.  Pain and fear of the unknown drives these two older and wiser individuals in a journey full of scorching encounters and unexpected twists and turns.

Lee Jameson’s childhood was a tough one full of sacrifice and death that ended with him in jail.  Once out, he found the men of Satan’s Knights and made a name (Pipe) and a life for himself that he thought was enough.  Tragedy showed how fleeting happiness is though and left him feeling responsible for the fall-out and running from his past choices.  Wallowing in guilt and waiting to die makes him the proverbial grumpy neighbor until the woman and children next door reawaken the heart he thought was dead.  He’s full of rage when they first meet him but their intrusions have him becoming more invested in their lives and has him finding a new family to be a part of.  He and Layla are a formidable match as she gives as good as she gets even as he tries to push her away.  Being part of her family brings out his softer side which endeared him to me and was an intriguing dichotomy to his usual gruff and badass persona.  Though he doesn’t think he’s worthy of a second chance at happiness each member of the Milano family shows him how wrong he is in one sweet and charming interaction after another. When danger once again comes calling he’s more than ready to reawaken his deadly demons to keep his new-found family safe.  Pipe’s been through a lot of loss in his life, seen his mother and men he called brother die right in front him, and it made me sympathetic towards him.  Everything he believed in, everything he’d sacrificed for the Club, was proved to be false and it broke me to see him so broken after seeing him so supportive of the Knights throughout so many books.  It was a slow journey towards recovery, towards finding something worth believing in, and I enjoyed the road he took every step of the way.  He’s a more seasoned hero but no less sexy and a master of dirty talk.  He has a sweet side too and despite his roughness his scenes with Layla’s kids charmed me wholeheartedly and added a bit of heart to a very gritty tale.

Layla thought she had a picture-perfect life but as the years went by her dream grew tarnished.  Starting over as a divorcee, and feeling lost and alone, she finds herself becoming slowly immersed in the tormented life of her neighbor. In so many ways he’s wrong for her, but with each sweet word and deed, she finds it easier to make him a part of her family.  Though he doesn’t think he’s worthy of her goodness she goes out of her way to prove him wrong.  With her kids by her side they slowly wear him down and give him a reason to fight again to keep them safe.  She and Lee are an engaging couple as they both enjoy cursing and aren’t afraid to stick up for themselves.  Theirs is a sizzling connection teeming with sexual tension and their clandestine encounters were erotically-charged and had me blushing.  He challenged her and reminded her that she’s more than a mother in scenes that were empowering for them both.  Ultimately, Layla’s an unforgettable heroine who becomes stronger than she ever thought possible, the perfect Old Lady to a badass biker!

Though this story took place in the world of the Satan’s Knights it was all about Pipe moving on from his painful past.  It was his journey to put years of guilt behind him to be the man he finally figures out he wants to be.  The chaos of the MC wasn’t far behind though as truths came out that put Layla’s life in danger.  That danger brought back men we’ve come to know and love despite how rough around the edges they are.  Pipe may have turned his back on his brothers, but they never gave up on him and when the Club’s war invades his HEA they ride to the rescue once again in an action-packed and fast-paced conclusion.  I don’t normally care for children in romances but Layla’s kids were immensely entertaining throughout this story.  Each had a unique personality that brought out different sides to Pipe that had me falling for him even more with each turn of the page.  The kid’s antics and speech were realistic and brought a sentimental smile to my face as I remembered my own childhood.  Sweet interactions were nicely balanced with scorching adult interludes that kept me fully invested in this heartbreaking and heartwarming tale.  Though the conclusion is a definitive one it’s clear there’s more hell to pay in the future as the Club’s nemesis is gaining strength.  Yes, this story is about Pipe’s redemption but it’s also about the Club finding its faith...not only faith in each other, but in the power and unending support of Jack Parrish who made them a family from the start.  This story gave me a chance to breathe and embrace the happiness before moving on to the next part of the war and I’m eagerly counting down the days until the blood starts shedding again!