Book Tour for Burn For You by J.T. Geissinger (REVIEW)

Readers looking for a fun and flirty romance will find themselves drawn to this atmospheric tale of opposites attracting.  Keep reading to get a tempting taste of Burn For You by J.T. Geissinger, with its marriage of convenience, along with my impressions of this first installment in the Slow Burn series that will have you wanting to add this to your bookshelf! 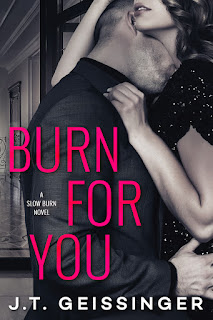 The marriage is fake. But for a sassy chef and an arrogant billionaire, the sparks are real… Jackson “The Beast” Boudreaux is rich, gorgeous, and unbelievably rude to the staff at Chef Bianca Hardwick’s New Orleans restaurant. Bianca would sooner douse herself in hot sauce than cook for Jackson again, but when he asks her to cater his fund-raiser, Bianca can’t refuse, knowing the cash will help pay her mother’s medical bills. Then Jackson makes another outrageous request: Marry me. The unconventional offer includes an enormous sum—money Bianca desperately needs, even if it does come with a contract—and a stunning ring.
The heir to a family bourbon dynasty, Jackson knows the rumors swirling around him. The truth is even darker. Still, he needs a wife to secure his inheritance, and free-spirited, sassy Bianca would play the part beautifully. Soon, though, their simple business deal evolves into an emotional intimacy he’s built walls to avoid.
As the passion heats up between them, Bianca and Jackson struggle to define which feelings are real and which are for show. Is falling for your fake fiancé the best happy ending…or a recipe for disaster?

Readers looking for an entertaining read will get just that with this romance that takes the Beauty and the Beast theme and turns it upside down.  Sparks soon fly from a combustible first meeting to the moment when a strong-willed woman’s life takes a devastating turn and she must rely on a sexy recluse to save her mother’s life.  Sexual tension soon takes over in a story that goes on a bit too long but that kept me fully invested in the outcome of their unexpected romance.  It was a romance that sometimes frustrated me but more often than not it put a smile on my face as I watched the two main characters dance around each other in a verbal tug of war.

Bianca Hardwick’s an immensely appealing heroine who’s strong-willed and quick to defend herself through colorful (and hilarious) comebacks.  She’s hard working and a supportive daughter who would sacrifice all for her mother.  Due to a cheating ex, who she also supported, she no longer believes in true love. She’s pragmatic and knows that happiness is something only she can control and sets out to do that with her agreement to marry a sexy recluse who needs her to claim his inheritance.  The more time they spend together the closer they grow to each other in a slow burning romance that frustrated me and charmed me all at once.

Jackson Boudreaux was born the only child to a family famed for their distillery. He’s always been surrounded by wealth and the finest things in life, believed he could get whatever he wanted.  Turns out he was wrong as he was betrayed by a woman who proclaimed to love him but cared more for his money.  Familial obligations, heartbreak, and disappointments all combined to have him running from his family and living a reclusive life far from his past.  Jackson’s very rough around the edges when readers first meet him, gruff and living up to his reputation of being a Beast.  It’s self-preservation at it’s most obvious and brings out Bianca’s feistiness in exchanges that were highly entertaining.  As he and Bianca spend more time together though heartfelt talks result and show him in a much kinder light.  Readers got a glimpse into a kind man who cares for a child with special needs and who would sacrifice much for the first REAL woman to make him feel alive.  Ultimately he’s a tarnished hero who doesn’t always do or say the right thing, but for those special few he wears his heart on his sleeve.

This was a story teeming with decadently delightful banter, a combustible couple, and a storyline that was at once familiar but still able to grab my attention and keep me fully invested in the outcome.  Jackson’s a man bruised by his past, a man with a fragile ego, who’s desperate to keep his heart hidden from the world.  His sexy looks and little boy lost psyche call to Bianca though and pull her wholeheartedly into his life where she finds unexpected love.  With the weight of their agreement weighing on them it’s a slow moving romance that had me desperate to see them finally give in completely and rooting for their HEA through it all.  Along with this likable main couple comes Ms. Geissinger’s vivid and loving homage to New Orleans.  The city takes on a vibrant life of its own and was a delightful backdrop to this combustible coupling.  A few secondary characters also caught my eye, among them were Jackson’s majordomo Rayford, who was wise beyond his years and didn’t hesitate to speak his mind as a pseudo-father.  Bianca’s friend Eeny was larger than life too with a love of magic and her boldness brought a smile to my face.  Bianca’s mother Davina was a huge influence on her and she was the driving force in all Bianca did.  Davina was full of wisdom and heartwarming words and she sometimes left me misty-eyed.  Overall this was an immensely entertaining read with appealing characters and a charming romance teeming with sexual tension.  While Ms. Geissinger’s previous romances were grittier and pulled at my heartstrings, this one is pure entertainment and I recommend it to all those looking for a fun and flirty romance! 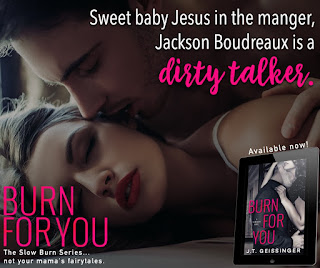 A former headhunter, J.T. Geissinger is the author of more than a dozen novels in contemporary romance, paranormal romance, and romantic suspense.
She is the recipient of the Prism Award for Best First Book, the Golden Quill Award for Best Paranormal/Urban Fantasy, and is a two-time finalist for the RITA® Award from the Romance Writers of America®. Her work has also finaled in the Booksellers’ Best, National Readers’ Choice, and Daphne du Maurier Awards.n
Join her Facebook reader’s group, Geissinger’s Gang, to take part in weekly Wine Wednesday live chats and giveaways, find out more information about works in progress, have access to exclusive excerpts and contests, and get advance reader copies of her upcoming releases.