Fans of the urban fantasy genre will find themselves quickly consumed by this erotically-charged tale full of suspense as a woman newly-turned into a vampire sets out to save the men who’ve changed her life irrevocably.  Keep reading to get a tempting glimpse of the uniquely crafted Blindsided by K.D. Grace, then add this second installment in the Medusa’s Consortium series to your bookshelf! 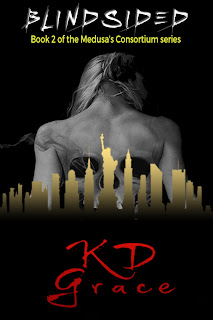 In New York City, away from those she loves, living with the enigmatic vampire, Desiree Fielding, Susan Innes struggles to come to terms with life as a vampire whose body serves as the prison for a deadly demon.
When Reese Chambers arrives unexpectedly from England, desperate for her help, she discovers that Alonso Darlington, his lover and her maker, has been taken captive and Reese has been warned to tell no one but her. Before the two can make a plan, Susan receives her own message from a man calling himself just Cyrus. He not only holds her maker prisoner, but also her lover, the angel Michael. If she wishes to see either of them alive, she’ll come to him and not tell Magda Gardener, the woman they all work for and fear.
With no help coming from Magda or her Consortium, Susan and Reese must turn to the Guardian – the terrifying demon now imprisoned in her body. He alone can help them, but how can she possibly trust him after all he’s done?

It was a dark place where she found him, with walls so high only a small patch of starlight was visible above, but she was a vampire now. She didn’t need the light, and he, well he had never needed the light, had he? He stood naked with his back to her. He was broad of shoulder. There were white scars like latticework across muscles stretched taut over his shoulder blades. At first she thought they were from a whip, but as she drew nearer, she saw that they were more geometric in form, as though perhaps they were some sort of ancient ceremonial writing. She traced the shapes of them with the tips of her fingers, and his muscles rippled with the sensation. With a start she realized she’d never seen his body before.
“That is because I have none,” came his reply. “Only in dreams can I wear the flesh of my choosing.”
“You’ve worn flesh often enough. I would have thought it was always of your choosing,” she said, making no effort to hide her bitterness.
“It was not my own, though. That pleasure, I have never known.”
“Only in dreams, you say. Then this is a dream.”
“You know that it is.” He didn’t turn to face her but leaned toward her, and she slipped her arms around him and rested her head on the flat of his back. His belly tensed at the touch of her hands, and he caught his breath in a soft moan. “Touch is what I longed for most,” he said. “I thought the lack of it would drive me insane while I languished in my previous prison. But here, with you, I’m closer to touch than I would have thought possible. I do not mind it, you know. It is no hardship to be nestled inside you, close to your heart.”
She released him and took in their surroundings once more. “This is the place I’ve created for you?”
He pulled her arms back around him and sighed with contentment as she laid her head against him once more. “This is how I have decorated. The place you created for me was only the shape of myself, both boundless and infinitesimal. Oh, it did not matter. I could see through your eyes, feel through your flesh, even though it no longer lived as it once did, even though you never spoke to me. I hoped that someday you would.”
“And when I refuse, you come uninvited into my dreams?”
“All dreams are uninvited, Susan, and perhaps this time it is you who have come uninvited into my dream.”
She thought about that for a moment. Was it even possible to visit the dreams of a demon? Did demons even have dreams?
“Susan?”
“Yes?”
“If I had come to you more gently, if I had courted you and companioned you and been patient with you in the ways of your world, would you have loved me?”
“You never gave me that chance.” 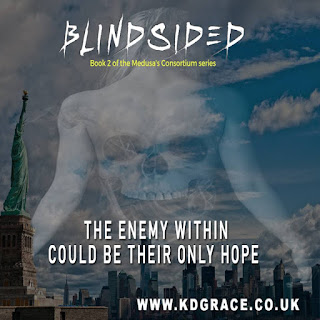 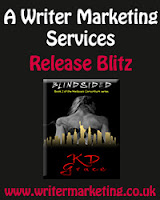 Voted ETO Best Erotic Author of 2014, K D Grace believes Freud was right. It really IS all about sex—sex and love—and that is an absolute writer’s playground.
When she’s not writing, K D is veg gardening or walking. Her creativity is directly proportional to how quickly she wears out a pair of walking boots. She loves mythology, which inspires many of her stories. She enjoys time in the gym, where she’s having a mad affair with a pair of kettle bells. Her first love is writing, but she loves reading and watching birds. She adores anything that gets her outdoors.
K D’s novels and other works are published by Totally Bound, SourceBooks, Accent Press, Harper Collins Mischief Books, Mammoth, Cleis Press, Black Lace, and others. She also writes romance under the name Grace Marshall.