Book Spotlight on A Duke By Default by Alyssa Cole (GIVEAWAY)

A woman rich in wealth but low in self-esteem finds herself starting over with the help of a sexy Scotsman with a big secret that could end their romance before it’s barely begun.  Keep reading to get a tempting taste of A Duke By Default by Alyssa Cole, with its romance of opposites attracting, then add it to your bookshelf.  In honor of this second installment in the Reluctant Royals series make sure to visit the link below for US readers to have the chance to win 3 paperback copies of the first book in this series too! 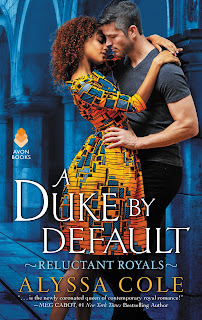 Award-winning author Alyssa Cole’s Reluctant Royals series continues with a woman on a quest to be the heroine of her own story and the duke in shining armor she rescues along the way...
New York City socialite and perpetual hot mess Portia Hobbs is tired of disappointing her family, friends, and—most importantly—herself. An apprenticeship with a struggling swordmaker in Scotland is a chance to use her expertise and discover what she’s capable of. Turns out she excels at aggravating her gruff silver fox boss…when she’s not having inappropriate fantasies about his sexy Scottish burr.
Tavish McKenzie doesn’t need a rich, spoiled American telling him how to run his armory…even if she is infuriatingly good at it. Tav tries to rebuff his apprentice—and his attraction to her—but when Portia accidentally discovers that he’s the secret son of a duke, rough-around-the-edges Tav becomes her newest makeover project.
Forging metal into weapons and armor is one thing, but when desire burns out of control and the media spotlight gets too hot to bear, can a commoner turned duke and his posh apprentice find lasting love?

What was he doing? With his apprentice? In the courtyard?
She was right to pull away from him.
“I’m sorry,” he said, yanking his hand back.
“You should be,” she said. “I have very sensitive skin.” Then she pressed up on her toes and kissed him.
The kiss was not what he’d imagined. Because, of course, he’d imagined kissing her, and in his mind she had been aggressive and take charge, pulling him down and wrapping her legs around him. But this kiss was hesitant, though she’d initiated it, soft and just a whisper of sensitive skin rubbing over sensitive skin, as if she was prepared to pull away and run off at any second.
Can’t be having that, can we?
Tav’s arms slipped around her waist and pulled her up flush against him. 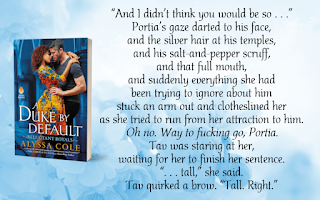 ALYSSA COLE is a science editor, pop culture nerd, and romance junkie who lives in the Caribbean and occasionally returns to her fast-paced NYC life. In addition to writing, she founded and hosted the Jefferson Market Library Romance Book Club and taught Romance Writing for Beginners. She speaks on topics such as writing erotic romance, writing multicultural romance, and self-editing. She has contributed romance-related articles to publications including RT Book Reviews, Heroes and Heartbreakers, Romance at Random, and The Toast. She has also started a bi-monthly column in the Romance Writer’s Report, Romancing the Globe, in which she chats with romance writers from around the world. When she’s not busy writing, traveling, and learning French, she can be found watching anime with her husband or tending to her herd of animals.