Readers will find themselves charmed by this romance of opposites attracting set against the backdrop of small town living as a woman low on self-esteem finds herself paired up with the town’s sexiest bachelor.  Keep reading to get a tempting taste of Making Chase by Lauren Dane, along with my impressions of it, then start counting down the days until this book hits shelves on August 27th.  In honor of this fourth installment in the Chase Brothers series make sure to visit the link below for the chance to win a $25 Amazon GC too! 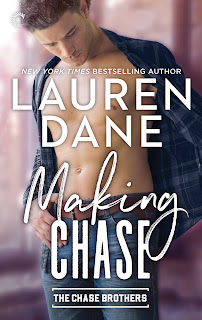 The Chase boys. Ridiculously hot and notoriously single.
All of Petal, Georgia, is waiting for the last Chase brother to fall. At least, that’s how it feels to firefighter Matt Chase, who’s getting a little anxious himself. His brothers have all found love—why hasn’t he? But fate, in the form of a curvaceous hairdresser, is about to change that.
Salon owner Tate Murphy has come a long way from her trailer-park roots, taking care of her seven siblings along the way. Even though she’s put the past behind her, she knows someone like Matt Chase is way out of her league. But that doesn’t stop her from getting a good eyeful every chance she gets.
When a car accident throws them together, Tate gets more than an eyeful—she gets the whole package. Not that she’s complaining. But when small-town bias and her own insecurities get in the way of their relationship, Matt will have to prove he doesn’t care where she came from…only where she goes.
The Chase is on. One small town. Four hot brothers. And enough heat to burn up anyone who dares to get close. Don’t miss the other books in the series: Taking Chase, Giving Chase and Chased. 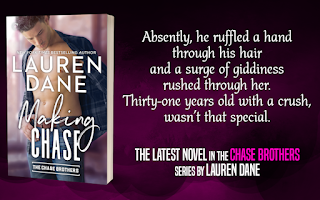 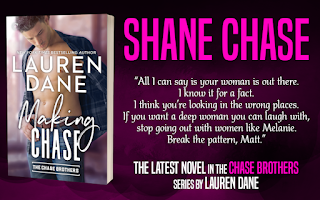 Through three previous books readers have fallen in love with the Chase brothers, cheered their HEAs, and have come to think of them as family.  This last installment introduces us to the final single brother, a handsome and kindhearted hero whose journey to his own HEA charmed me every step of the way.  His is a journey full of heart and soul that brought me joy as well as tears as he proved himself to be the quintessential book boyfriend and is still bringing me lots of wonderful fodder for my nightly dreams.

Tate Murphy stands out amongst all the heroines I’ve read about through the years as she overcame a childhood of obstacles to make a good life for herself as an adult.  She overcame her drunken father’s verbal abuse concerning her larger size, along with her mother’s uncaring attitude and chronic infidelities, to raise her siblings and rise above her family’s humble roots.  She had to grow up far too soon, had to take charge of her younger sibling’s care, which has left her little time to find her own HEA.  Matt Chase is the one man in their small town who utterly captivates her and because of his perfection she sees him as only a dream, a man she can drool over while continuing to care for her siblings.  The day she gets in a car accident though is the day that everything changes and her dream has the chance to become a reality...if only she’s brave enough to go after what she wants.  Tate’s a delightful heroine, caring and very loyal when it comes to family.  Nothing makes her happier than when she cooks for them or is spending time with them and their familial interactions warmed my heart. Tate’s strong-willed in many ways, as evidenced by the sacrifices she made to keep her siblings clothed and fed when they were young, but it’s her self-esteem that’s bruised and that holds her back when it comes to picturing herself with Matt.  It’s a rocky road for them as the judgments of some in their town cause her to doubt the obvious love he feels for her.  The cattiness of others cast a shadow over their sweet and sexy relationship, a relationship that Matt nurtured every step of the way as he wanted her to see herself as he did...a sexy goddess with a heart of gold.

Matt Chase has a heart of gold too, one hidden from some who value only his good looks and sterling reputation and wealth.  He’s a dedicated firefighter, a caring son, and a loyal and supportive brother, but when it comes to love he’s still alone.  His brothers have all found their HEAs, but despite the many women he’s dated he still hasn’t found The One.  He longs to have what his brothers have, someone who sees past his obvious good looks to the man beneath, someone of substance who he can talk and laugh with and who values family as much as he does.  His first meeting with Tate might not have been memorable, but the cookies she makes for him capture his attention and start them on a path of friends-to-lovers.  Matt’s extremely protective of Tate, even at the beginning he takes offense of anyone who brings up her curviness.  As their connection intensifies he often reminds her of his attraction to her and of all the other qualities he finds appealing which she’ll need when dealing with the cattiness of some of the women in town.  They might be opposites in some ways but together they’re a formidable couple who are utterly delightful together.  By the turn of the final page Matt has set himself apart from other heroes through his sweet and sexy words and deeds and his HEA was one worth waiting for.

This was a story that pulled at my heartstrings, making me happy one moment while causing a tear the next as Tate fought to accept her HEA while Matt tried to get her to take the time to make herself happy.  Their relationship started off sweetly, full of sexual tension, before becoming combustible in nicely paced erotically-charged encounters that brought out a sex kitten vibe from the blushing and at times demure Tate.  The banter between these two was crackling, their arguments realistic yet not drawn out for melodramatic purposes.  The issues they dealt with over her past, the aspects of daily living as a couple, were also dealt with realistically and kept me fully engaged in their intensifying connection.  Surrounding this immensely appealing main couple was a large cast of family members, some we’ve seen before with some that are new.  They’re a distinctive group in looks and personalities, but they were all loyal to each other.  Matt’s brothers were supportive of his relationship with Tate and stood up for her when those in town tried to tear her down.  Matt’s mom Polly was especially protective and I loved seeing her feisty side emerge from such a ladylike facade.  Tate’s siblings had a very tough upbringing with her taking the brunt of the verbal abuse and older brother Tim carrying the physical scars. Everything was a struggle, and though they’ve forged successful lives for themselves, some still see them as trash who came from the wrong side of the tracks.  It’s made for a tight-knit connection between them that endeared them to me and has me wanting to know more about them.  Small town living was on vivid display throughout this story too, all the good and the bad, with the unwavering support of some as well as the cattiness of others.  Coming from a small town myself had me easily relating to this and by the turn of the final page I was left charmed and cheering.  Matt and Tate overcame a lot due to her past and her insecurities and this series-ender was wrapped up beautifully with a bow.  Ultimately, Ms. Dane has crafted a near-perfect hero along with an unforgettable heroine, in a story that I recommend wholeheartedly! 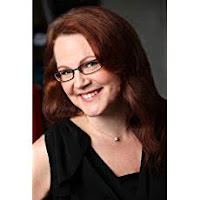 The story goes like this - While on pregnancy bed rest, LAUREN DANE had plenty of down time so her husband took her comments about "giving that writing thing a serious go" to heart and brought home a secondhand laptop. She wrote her first book on it before it gave up the ghost. Even better, she sold that book and never looked back.
Today Lauren is a New York Times bestselling author of over fifty novels and novellas across several genres.