Audiobook Tour for On a Tuesday by Whitney G. (Review & GIVEAWAY)

Fame means nothing for a man still longing for the girl who left without a word in this romance full of second chances.  In this audiobook format readers will find themselves fully immersed in this world and rooting for this likable couple every step of the way.  Keep reading to get a tempting taste of On a Tuesday by Whitney G., along with my impressions of it, then add it to your bookshelf.  In honor of this first installment in the One Week series make sure to fill out the form below for the chance to win a $25 Amazon GC too! 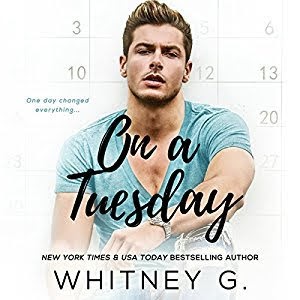 We met on a Tuesday.
Became best friends, then lovers, on a Tuesday.
And everything fell apart on a Tuesday...
Charlotte Taylor has three automatic strikes in my book: 1) She hates me. She also claims that I’m a “domineering jerk with a huge, overbearing ego.” (I do have something huge. It’s not my ego, though.) 2) She takes our mandatory tutoring sessions way too seriously. 3) She’s sexy as hell…And a virgin.
At least, those were her strikes before our study sessions started lasting longer than they were supposed to. Until one innocent kiss became a hundred dirty ones, and until she became the first woman I ever fell hard for.
Our future together after graduation was supposed to be set:
Professional football for me. Law school for her.
But she left me at the end of the semester with no explanation, and then she completely disappeared from my life.
Until tonight.
We met on a Tuesday.
Became everything, then nothing, on a Tuesday.
And now it’s seven years later, on a Tuesday...
*This is a full length second chance romance, inspired by Adele’s “When We Were Young”. 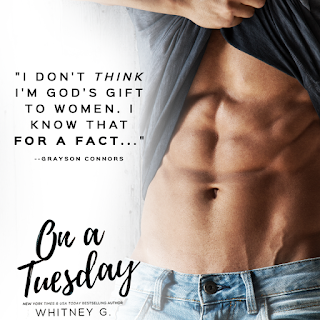 MY IMPRESSIONS OF THIS AUDIOBOOK:

From the moment I started reading this second chance romance I found myself with a smile on my face.  With its fun and flirty banter and charming and patient hero I was captivated by the slow burn relationship between apparent opposites and their tug of war interactions.  Experiencing this in audiobook format pulled me even further into this couple’s journey and kept me on the edge of my seat waiting for the misunderstandings of the past to finally be buried.

Grayson Connors was the quintessential star college football player, cocky and popular with the ladies.  At least that’s what people saw when they looked at him.  In flashbacks though we saw a young man dedicated to his sport and to his studies, growing bored with the rest of the superficiality.  While his friend seemed to enjoy all the extracurricular activities, Grayson clearly longed for something more and it’s what drove him to chase after Charlotte as hard as he did.  His interactions with Charlotte started off as friends, playful before turning into verbal foreplay, and I hung on every interaction.  Grayson charmed me wholeheartedly, his dedication to Charlotte making me smile as he never pushed her for more than she was ready to give.  He was self-assured, confident in himself, but never arrogant and I was endeared by his words and deeds.  Just when his HEA was within reach though everything fell apart with Charlotte leaving without a trace.  Seven years later puts them face to face once again, giving him the chance to learn what went wrong.  The years gone by were heartbreaking for him and I was angered by Charlotte’s treatment of him. He’s still the sweet hero he was as a young man though...waiting for Charlotte and proving his devotion to her is unending.

Charlotte Taylor was the studious good girl in college.  Dedicated to her studies but slowly trying to break free of her sheltered childhood.  She was regimented in many ways, lived on a permanent schedule, but the flashes of feistiness directed at others had me warming up to her very quickly.  She wasn’t very outgoing at the start of her college career but being around Grayson had her branching out to live life to the fullest.  She mocked him endlessly when they first met in an entertaining war of words, through flirty and witty banter where she gave as good as she got, that quickly became more sensual.  Though she felt somewhat intimidated by the groupies and his reputation, she couldn’t keep fighting their connection forever and I literally cheered when they got together. Happiness didn’t last forever though, and for that I blame Charlotte.  She let her doubts and fears take control, forgetting how loving and loyal Grayson always was.  After seven years, he was still waiting and her continuing to hurt him left me frustrated.  Her actions overall diminished her in my eyes and despite how likable she was as a friend, I’m not convinced she’ll ever be fully worthy of Grayson.

This was a fast-paced read told in dual POVs where each side got to share their feelings and fears.  Past interactions were beautifully balanced with the here and now to tell a sexy and sweet tale of second chances.  Grayson and Charlotte were opposites in many ways but together they just worked courtesy of their crackling connection in and out of the bedroom.  Their interactions were teeming with sexual tension, leading to scorching encounters that were seared into my brain.  The voice actors, Erin Mallon and Joseph Discher, did a delightful job in bringing their characters to life and I was quickly captivated once their voices emerged from my speakers.  Overall there were many reasons to love this story, from the sizzling romance to the laugh out loud friendships.  The biggest disappointment though was the reason why Charlotte ran away all those years ago.  The reason isn’t revealed until late in the story and the reveal just left me sad, sad for all the years wasted.  It was a Big Misunderstanding perpetuated by Charlotte’s doubts and it forever altered my impressions of her. Thank heavens for Grayson though who was the bright spot in this story and still shows up nightly in my dreams.  He’s the quintessential book boyfriend! Other highlights were Charlotte’s friend, Nadira, who often spoke without a filter and pushed her friend into breaking out of her self-induced bubble.  Grayson’s friend Kyle was an unrepentant horndog, overly cocky too, but I still found him endearing and quick to make me laugh.  This pair were larger than life, leaving an indelible mark in every scene they were in, and I’d love to see more of them in the future.  On a whole this was a romance that sparkled as an audiobook, putting a modern yet naughty spin on the proverbial bedtime story, and I recommend the hard-fought HEA found in this book to all lovers of romance.

*I got this audiobook from audible.com for review in exchange for my honest opinion.

Whitney G. is a twenty-eight-year-old optimist who is obsessed with travel, tea, and great coffee. She’s also a New York Times & USA Today bestselling author of several contemporary novels, and the co-founder of The Indie Tea–an inspirational blog for indie romance authors.
When she’s not chatting with readers on her Facebook Page, you can find her on her website or on instagram. (If she’s not in either of those places, she’s probably locked away working on another crazy story.)
Don’t forget to sign up for Whitney’s monthly newsletter HERE.