It’s an emotionally intense tale readers will find in this unforgettable journey of the men and women of the Satan’s Knights.  Keep reading to get a tempting taste of Riding the Edge by Janine Infante Bosco, along with my impressions of it, then add it to your bookshelf.  In honor of this next installment in the gritty and heart-wrenching series make sure to fill out the form below for the chance to win a mystery gift featuring goodies from the books in this series too! 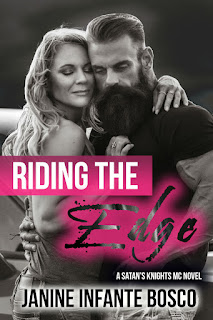 Once in a while, right in the middle of an ordinary life, something extraordinary comes along that knocks you on your ass...
“Wolf.”
I’m a simple man with simple values. You either love me or you hate me, but the ones who need me, always got me. I’m the self-proclaimed Wolf of the Satan’s Knights MC, the beast who will fight his way out of any dark alley to defend your honor. The brother you call upon when you’ve lost your faith in humanity.
However, secrets and lies are the cancer of a man’s soul. Exposed, they will eat away all that is good and leave nothing but destruction in their wake. They’ll prove the best intentions sometimes fail and leave you questioning your life’s choices.
Now, searching for a purpose, I find myself facing the ride of my existence with a woman just as jaded as me. As she fights the biggest battle of her life, I want to be the man who stands by her side. The man who ain’t afraid to ride the edge of misery because he knows there is something beautiful on the other side...
“Maria.”
I’ve prevailed against the mob, a deadbeat ex-husband and the woes of being a single mother. While someone else may have wished for a different life, I believe I’m stronger for everything I’ve endured. I’m someone who speaks her mind and fights for what is right. A woman who will smack you upside the head with a frying pan and ask questions later.
Terrified of love, I’m an otherwise fearless woman.
Until a doctor solemnly diagnoses me and my strength falters.
Now as fear engulfs me, an unexpected man dressed in leather, holds out his hand.
As a woman who never needed anyone, I suddenly need him.
His assurance.
His strength.
His love 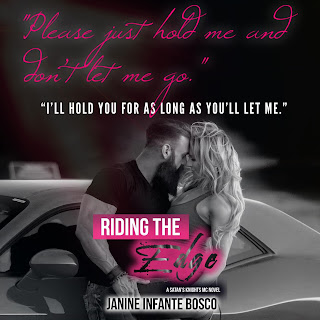 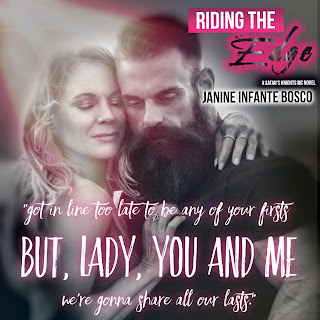 The moment I start reading one of Ms. Bosco’s books I know that I’m going to be put through the emotional wringer and be left a teary-eyed mess.  This installment did all that and more by depicting the personal journey its characters took along with redefining the Satan’s Knights as being “Property of Parrish” is reaffirmed.

Wolf has been a member of the Satan’s Knights from the very beginning, standing alongside Jack Parrish in a bond stronger than brothers.  He was supportive in helping him fight his mental demons and sacrificed much to see Jack’s vision become a reality.  If Jack is the soul of the Club, Wolf is its heart as he’s given his all when tragedy has befallen each and every one of his brothers. He’s older and wiser now though, more seasoned as to what’s important, and he’s come to a sad realization that all he has is the Club.  With each of his brothers finding their own HEAs he’s come to want that for himself, especially after an emotional betrayal by his brothers that has far-reaching consequences and has him doubting his place in the Club.  Wolf has had few interactions with the classy and cool Maria Bianci, but they’ve left an indelible mark on his soul and has him setting out to woo her as only a bad boy biker can do.  Theirs is a scorching connection full of naughty banter and exuding tons of sexual tension. Wolf holds nothing back in making her his.  His honesty in acknowledging their differences while reaffirming his devotion to her endeared him to me.  When her very life was on the line he was by her side, fighting alongside her to beat the odds, all while strengthening her self-esteem that’s being weighed down by her diagnosis.  Wolf’s an older hero but no less sexy!  I loved his naughty side and was equally drawn to his kind heart that was often on display.  Even with the Club facing its biggest crisis he never left her side, he wore his heart on his sleeve in his scenes with Maria and it had me cheering the two of them on as they dealt with some very heavy issues.

Maria’s been unlucky in love after joining herself to a bad man at an early age. She soon found herself abandoned and struggling to survive, with the only bright spot her children.  Through the years she’s hardened herself to love, never wanting to be weak or reliant on any man.  She’s quite content to take care of herself and her feisty demeanor and sassy banter had me smiling. Though she’s sworn off bad men, she can’t help but be drawn to Wolf once he makes his intentions known.  Though there’s many reasons why she shouldn’t be with him, he presents her with many more reasons why they’re perfect together and I couldn’t agree more.  My heart broke for Maria when she received a life-altering diagnosis, a diagnosis that was vividly depicted in both the medical journey as well as Maria’s emotions regarding the changes her body was going through.  These scenes had a personal feel to them and it brought a tear to my eye.  For so long Maria saw leaning on someone else as a weakness, but in the biggest fight of her life she was happy to have Wolf by her side. Maria was an immensely appealing heroine, more mature but no less wanting to be desired by a man.  Her role as mother was nicely balanced with that of sex kitten in scenes that were sweet and sexy and showed that older couples are just as capable of setting the pages on fire.  She was strong-willed, hiding her momentary tears, and this dichotomy made me like her even more as she too always tried to protect others.

This book consumed me from the very start as a sense of foreboding hung over the story from the first page to the last.  While Wolf was supporting Maria during her battle, his Club was going through some painful changes of its own. Jack’s mental illness is worsening, the medicines are not working, and his questionable actions have caught up to the Club and leave the brothers facing some tough decisions.  Blackie too is dealing with his own demons with the ramifications causing the Club even bigger problems in heartbreaking scenes late in the story.  Even in the Club’s darkest moments though they’ll be reminded of what “Property of Parrish” really means and it will be a mantra readers will remember as they wait for the next powerful installment.  On a whole this was an intensely emotional read, beautifully balancing love between a couple and love of a brotherhood.  Both require a lot of sacrifice, but in the end both are character defining.  Many moments in this book made me cry, but by the end I still had hope despite all that’s come before.  Though he’s battered and bruised I still believe in Jack Parrish and look forward to his final story being told next.  Readers who haven’t yet read this series need to start now as they’re missing out on something special!

OTHER BOOKS IN THE SATAN’S KNIGHTS MC SERIES: 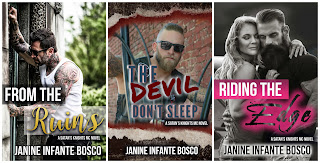