Book Spotlight on Come Back to Me by Sharon Sala (GIVEAWAY)

Young love torn apart by family anger reawakens years later under a shadow of secrets and lies that put a reunited couple’s commitment to the test.  Keep reading to get a tempting taste of Come Back to Me by Sharon Sala, then add this small town romance to your bookshelf when it releases on August 28th.  In honor of this sixth installment in the Blessings, Georgia series make sure to fill out the form below for the chance to win a set of the first three books in this series too! 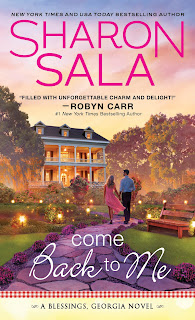 Love always endures the test of time...
After a devastating fire pitted their families against each other, high school sweethearts Phoebe Ritter and Aidan Payne were torn apart. Twenty years later, Aidan is called back to Blessings, nervous about confronting his painful past. And that’s BEFORE he knows about the nineteen-year-old secret Phoebe has been harboring all this time.
As Aidan tries to make up for lost time with the family he didn’t know he had, Phoebe and Aidan rediscover long-suppressed feelings. But the past won’t lie buried, and old enemies threaten to destroy the peace they’ve fought so hard to find.

Aidan was carrying a suitcase to their car when he heard the sound of running footsteps. He looked up to see Phoebe coming toward him. Her face was red like she'd been crying and her long brown hair was in wild disarray. The sight of her appearance now, after all he and his family had endured alone, both hurt and angered him. He shoved the suitcase into the trunk and headed back inside.
"Wait, Aidan, wait.”
He stopped, then slowly turned to face her.
"What are you doing here?”
Sunlight momentarily blinded her as she looked up. She blinked rapidly to clear her vision, then looked up again, searching his face for a sign that he was glad to see her, and saw nothing but hate and disgust.
Her heart sank.
"Please don't go.”
Aidan's body language was one of defiance. The tone of his voice held nothing but disdain.
"The only thing that matters to me here, is that I'm leaving my mother behind. Her death broke what was left of my father's heart, and your family destroyed his reputation. We can't get out of Blessings soon enough for me. Go home.”
Phoebe started to shake. This was really happening. She was losing Aidan forever.
"I'm sorry. I'm so sorry," she said. "Please don't be mad at me! I know your father is innocent.”
He turned his back and walked into the house.
Despite the sweat running down her back, she suddenly shivered. She'd never seen him like this - cold and shut down, but she couldn't leave. She stood on the sidewalk waiting, half-blind with tears as he and his father come out of Preston Williams' house together.
Preston gave each of them a last hug, and then stood on the porch as they headed to the car.
Preston saw her, but didn't acknowledge her.
George glanced at her, started to speak, and then shook his head and slid into the driver's seat.
Aidan put the last of their things into the trunk and slammed it shut.
"I'm sorry, Aidan," Phoebe said.
He didn't look at her as he got into the car.
George started the engine.
"Please! You have to forgive me," Phoebe cried.
George put the car in gear and backed out of the drive.
Phoebe started running down the driveway after them. "Come back! Come back! Please, Aidan, come back to me!”
Aidan glanced in the side mirror outside his window, startled to see her running behind the car. But they were going faster, and her image was growing smaller and smaller. The last sight he had of her before they turned the corner, she was on her knees in the street, her hands covering her face. The pain in his chest was so great he thought he would die.
He took a slow, shaky breath and looked away. 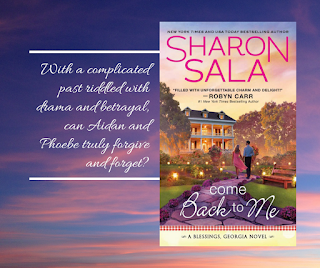 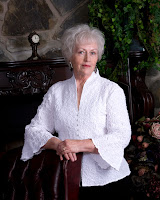 It was a job she hated that drove Sharon Sala to put the first page of paper in an old typewriter, but it was the love of the craft that kept her writing. Her first efforts at writing came in 1980 when she began a book that wound up under her bed. A second book followed in 1981 and suffered a similar fate, but she claims the writing bug had bitten hard. However, she let life and the demands of a growing family delay her from continuing until a tragedy struck.
Her father died in May of 1985 after a lingering illness and then only two months later her only sister died unexpectedly, leaving her almost blind with grief. She vowed then and there that she was not going to wind up on her deathbed one day with regrets for not following through on her dreams.
She joined writers groups and attended conferences and slowly learned her way around the written page. By 1989, she decided she had come far enough in her writing to attempt another try at book-length fiction and began a book that would later be entitled SARA’S ANGEL. As fate would have it, the first publisher she sent it to, bought it, and she hasn’t looked back.
As a farmer’s daughter and then for many years a farmer’s wife, Sharon escaped the drudgeries of life through the pages of books, and now as a writer, she finds herself often living out her dreams. Through traveling and speaking and the countless thousands of fan letters she has received, Sharon has touched many lives. One faithful reader has crowned her the “Reba of Romance” while others claim she’s a magician with words.
Her stories are often dark, dealing with the realities of this world, and yet she’s able to weave hope and love within the words for the readers who clamor for her latest works.
Always an optimist in the face of bad times, many of the stories she writes come to her in dreams, but there’s nothing fanciful about her work. She puts her faith in God, still trusts in love and the belief that, no matter what, everything comes full circle.
Her books, written under her name and under her pen name, Dinah McCall, repeatedly make the big lists, including The New York Times, USA Today, Publisher’s Weekly and Waldenbooks Mass market fiction.
Sharon Sala.
A woman with a vision.