A man of wealth finds himself drawn to the unique woman who saved his life while he was searching for the truth on the dangerous side of town in a historical tale full of heart and soul.  Keep reading to get a tempting taste of When a Duke Loves a Woman by Lorraine Heath, along with my impressions of it, then add it to your bookshelf.  In honor of this second installment in the Sins For All Seasons series make sure to visit the link below for the chance to win 1 of 3 paperback copies of the first book in this sensual and sentimental series! 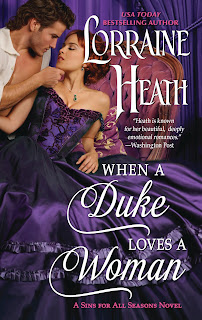 A NEW STANDALONE HISTORICAL ROMANCE IN THE SINS FOR ALL SEASONS SERIES.
Gillie Trewlove knows what a stranger’s kindness can mean, having been abandoned on a doorstep as a baby and raised by the woman who found her there. So, when suddenly faced with a soul in need at her door—or the alleyway by her tavern—Gillie doesn’t hesitate. But he’s no infant. He’s a grievously injured, distractingly handsome gentleman who doesn’t belong in Whitechapel, much less recuperating in Gillie’s bed...
Being left at the altar is humiliating; being rescued from thugs by a woman—albeit a brave and beautiful one—is the pièce de résistance to the Duke of Thornley’s extraordinarily bad day. After nursing him back from the brink, Gillie agrees to help him comb London’s darker corners for his wayward bride. But every moment together is edged with desire and has Thorne rethinking his choice of wife. Yet Gillie knows the aristocracy would never accept a duchess born in sin. Thorne, however, is determined to prove to her that no obstacle is insurmountable when a duke loves a woman.

“What are you doing?”
“As I intend to be here through the night, I decided to get comfortable.”
The slow unknotting and unwinding of his neck cloth was next. Then he began rolling up the sleeves of his shirt. She’d seen him naked. Why was it the baring of only his forearms was so much more provocative?
Loosening the top two buttons of his shirt, he returned to the bed, sat on its edge, and reached for the tray, picking up a cloth she hadn’t noticed.
“You’re not going to wash me.”
He arched a brow at her. “Do you really want to engage in a battle you can’t possibly win?”
“You shouldn’t assume just because I’m a woman that I would lose.”
“I’m not assuming that at all,” he said, his voice low and raspy, sending warm tingles along her spine even as she recognized the threat of a challenge when it was being delivered. He leaned in until she could almost see her reflection in his dark eyes. “But I am assuming, as much as you pretend otherwise, that there is a measure of feminine vanity in you and you will be in want of a clean face when I kiss you.” 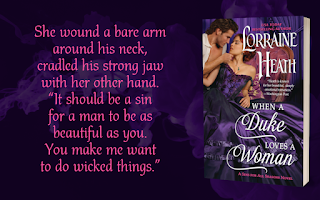 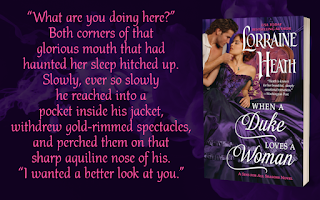 When it comes to satisfying historical romances, my go-to author is Lorraine Heath for her charming storylines and memorable characters whose actions pull me into their lives wholeheartedly.  Her latest release is a fanciful one, one that needs a suspension of belief to truly appreciate its unique pairing, but it’s still one that utterly charmed me.

Gillie Trewlove’s life has always been precarious.  From the moment she was left on a doorstep as an abandoned baby, the bastard daughter of the elite, her life was always going to be a struggle.  Though her childhood was full of danger from those looking to use a child, there was lots of love and protectiveness from the boys who called themselves her brothers along with the woman who raised her without complaint.  While there was plenty of love, there was no room for femininity as she was dressed as a boy, wore her hair short, and bound her chest as it was safer for her to live that way.  As an adult, she’s now a woman good at intimidation and smart in the handling of business as a successful bar owner.  She’s a strong-willed woman unafraid to rush in and save the day as she did when saving Thorne from street thugs.  She’s immediately drawn to Thorne and desperate for him to live as he engenders unknown feelings in her. Out of fear she’s always kept her distance when it comes to men and romance as she doesn’t want to lose her freedom.  Thorne tempts her though, his sexy looks and desire to know everything about her leave her wanting more from him.  Though she knows they come from two different worlds, she can’t help taking a taste of what he’s offering in a romance full of push and pull moments that had me cheering for them every step of the way.

The Duke of Thornley comes from wealth but his life has been far from picture perfect. On the eve of his long-planned marriage to a respectable young woman Thorne finds himself bleeding out in an alleyway while looking for his runaway bride.  Being saved by an unlikely heroine changes his life irrevocably though and reawakens a heart that long ago quit beating.  He’s fascinated by Gillie, drawn to her unwavering strength and ability to live in such a rough world.  His childhood was a cold one courtesy of a cheating father and vindictive mother so he’s leery of unconditional love and it’s an internal battle he wages with himself over Gillie.  He’s a cautious man, but not at all arrogant as duke’s usually are.  The more he’s around Gillie though, the deeper she works her way into his heart and the harder he tries to show her that opposites not only attract...but work beautifully together.  Early glimpses showed him to be reserved but as the story progressed his emotions started coming through more boldly and his subtle wooing of Gillie put a smile on my face.

This is a sweet and sensual story with a main couple that jumps off the pages. Gillie’s not your typical heroine and it’s those differences that drew me to her. She’s strong in many ways but embracing her femininity intimidates her and is the biggest roadblock in her journey to HEA.  She longs to be loved but is scared of losing herself, scared of losing the security she’s worked so hard for. It’s a tough battle to prove himself but Thorne showed her in many subtle, and not so subtle ways, his growing feelings for her and it endeared him to me. Alongside this immensely appealing main couple were Gillie’s protective brothers, men with compelling backstories I long to hear.  Though they weren’t bound by blood they still took it upon themselves to watch over Gillie, intimidated Thorne when necessary, and their manly interactions made me smile. Though this story wasn’t perfect (I was often frustrated by Thorne’s many comparisons of Gillie to his ex) I still found much to like about it and am excited by the groundwork laid her for the next installment featuring Thorne’s ex and one of Gillie’s brothers.  Those looking for an entertaining romance and unexpected heroine will definately want to add this one to their bookshelf!