Things get combustible when the leader of a group of jewel thieves chooses a sexy, tatted-up bad boy to commit one last job in an exhilarating tale that will keep readers glued to the pages.  Keep reading to get a tempting taste of Shimmy Bang Sparkle by Nicola Rendell, and get to know even more about the heroine courtesy of a guest post, then add this scorching tale to your bookshelf.  In honor of this new release make sure to fill out the form below for the chance to win a digital copy of this book along with a $25 Amazon GC too!

What Stealing A Diamond and Stealing a Heart Have In Common with the Heroine from Shimmy Bang Sparkle by Nicola Rendell...Hi! My name is Stella Peretti. I am the head of the only all-female jewel heist crew west of the Mississippi. We call ourselves the Shimmy Shimmy Bangs. I got started in this life of crime when I was a girl. I saw something that I knew was unfair and I had to do what was necessary to make it right. I’ve heard that the old hardened cons who learn about us say we are “Robin Hooding” our way around the Southwest. I’m really proud of that!

Nick gets involved in my plan to steal the North Star diamond because of an accidental text that I mistakenly send to him. I know, I know. Dummy! But because my girls are not able to execute the heist with me, Nick offers his expertise. I’m reluctant at first. But he wins me over. He’s competent, persistent… and sexy. God, so sexy!

What have I learned from my experience with Nick? Surprisingly, stealing someone's heart is a lot like stealing a diamond. Here are five skills that you need for both:

If You’ve Got It, Flaunt It.
I don’t go into a heist or a relationship with my guns blazing. Instead, I give a little bat of my lashes, show a little leg, play up my most feminine qualities. Being a good flirt is a huge advantage in my line of work… and in nabbing Nick Norton, too!

It’s a Confidence Game.
Having confidence in yourself is key to getting what you want, either in a heist or winning a man’s heart.

Play Dirty.
There’s a time for playing by the rules and being a good girl, but it’s no holds barred in love and theft!

All Or Nothing.
I’ve known a lot of thieves who are doing twenty-to-life for a Zales one karat diamond.. And sure, I’ve stolen my share of engagement rings but only if it’s easy pickings. If you’re going to risk your liberty and your heart, it damn well better be worth it. The North Star is worth it. And so is Nick. 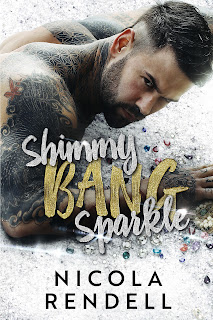 All Nick Norton wants is to stay on the straight and narrow…and never get caught stealing again. Then he lays eyes on her: Stella Peretti—100 percent sexy and absolutely irresistible. Especially when he sees her smooth moves lifting a two-karat diamond. Nick realizes he’s found the sparkling woman of his dreams—one so perfect for him it’s almost criminal.
The Shimmy Shimmy Bangs are master jewel thieves who are planning the heist of the century. And Shimmy leader, Stella, isn’t about to let anyone—even if he is a hunky, tatted-up studmuffin—get in her way. But when two of her girls are put out of commission, Stella realizes that Nick isn’t just a red-hot distraction. He might be the answer to her pilfering prayers.
Now, Nick and Stella are putting everything on the line for one last job. But when two thieves have this much chemistry, it’s only a matter of time before somebody’s heart gets stolen.

“It’s fun to dream.”
Stella tugged on the diamond ring with her thumb and forefinger to take it off, it didn’t cooperate. She furrowed her eyebrows, and laughed nervously, wiggling it and spinning it. “That’ll teach me to get extra-large fries with my lunch.”
The saleswoman laughed, nodding, and patted her slightly pudgy stomach. “Tell me about it, hon.”
For a few tense seconds, I stared at the ring. She twisted it, and tugged it. She rocked it back and forth. She gave it a yank, but still it didn’t budge. I took her hand in mine and gave it a shot too. But didn’t have any luck either. It was totally stuck.
“This isn’t embarrassing or anything,” said Stella softly as she gave it another try, doing the side-to-side rocking again. “I’m sure this is a first.”
“Oh my gosh, no. Fingers often swell in the afternoons. Lemme go get you some lotion. Be right back,” the saleswoman said, and headed for the back of the store.
Stella sighed hard and grabbed her purse from the floor, hooking it over her shoulder. “Thank you,” she called after the woman as she jingled away. “I really apologize. We’ll be out of here in no time.”
The saleswoman tossed her hand in the air. “Totally OK. Hang on.”
As she walked away though, Stella transformed right before my eyes. It was subtle, but I was watching her so close that it was like a butterfly coming out of a cocoon. The sweet-as-pie innocence was replaced with calm and focus. Her posture changed, the way she’d held her lips changed, even her stance changed. She shifted her hair over her shoulder and turned away from me, preventing me from seeing what she was looking for in her bag. I rolled my weight back onto my heels to get a different angle—not enough for her to notice, but enough to see what was going on. With the help of an oval tabletop mirror to my right, I saw exactly what she was up to. From the side pocket of her purse, she produced a little tube of something.
Hand lotion.
She didn’t call out to the saleswoman, but instead lowered her head slightly, allowing her hair to slip off her shoulder. I realized she was not only keeping her hands hidden from me, but also—thanks to her hair—away from the prying eyes of the black-domed security cameras in each corner of the shop. Suddenly, each detail seemed practiced. Strategic.
Damn near . . . professional.
She flipped open the top of the tube and squirted some onto her finger.
And then she did it. If I hadn’t been watching it, I wouldn’t have believed it. Houdini would’ve wept. Copperfield would’ve proposed. Blaine would have asked her to do a Vegas show with him. Once her finger was greased up, she used the thumb of her left hand to slide the diamond off her finger. It fell noiselessly into her bag. She dropped the tube of lotion on top, and the ring disappeared into the depths of her purse. Then, from the interior side pocket of the purse, she produced...
The same setting. The same cut. The same size.
The identical engagement ring.
I was floored. But somehow, I managed to play it cool. She didn’t know I’d seen her, and I wasn’t going to blow her cover. Only a creep interrupts a magician in the middle of an act.
The saleswoman tottered back toward us. The fake was on Stella’s finger, and the real ring was nowhere to be seen. “Here you go, hon,” said the woman, holding out a bottle of lotion with the lid already undone. “Smells real good too.” She squirted a glop of the pink liquid on Stella’s finger, making the whole place smell like laundry detergent.
Stella worked some lotion around her ring finger, and slipped off the fake, with a big sigh. “Phew! That was a close one.”
The saleswoman just giggled. “No worries. Happens more than you’d think,” she said, and took the keys from her skirt. Using a jewelry cloth, she cleaned the lotion off the ring until it sparkled again, set it on its spinning velvet platform, and locked up the case.
And there I thought I’d found my bliss already.
“Thanks so much for all your help,” Stella said, and zipped up her purse.
I felt like I was dreaming. Never, in my whole life, had I seen anything so smooth. She seemed sweet, she looked so sexy, and to top it all off, she was utterly badass. I needed to get my hands on her. Now. 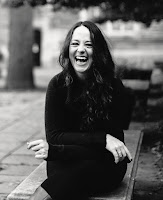 Bestselling author Nicola Rendell loves writing naughty romantic comedies. After receiving a handful of degrees from a handful of places, she now works as a professor in New England. Nicola’s work has been featured in the Huffington Post and the USA Today blog Happy Ever After. She loves to cook, sew, and play the piano. Her hobbies might make her sound like an old lady, but she’s totally okay with that.