Suspense and unrequited love drive this historical romance set in the highlands.  Keep reading to get a tempting taste of Highland Betrayal by Alyson McLayne, then start counting down the days until this compelling read hits bookshelves on August 7th.  In honor of this third installment in The Sons of Gregor MacLoed series make sure to fill out the form below for the chance to win 1 of 5 copies of the previous book in this series too! 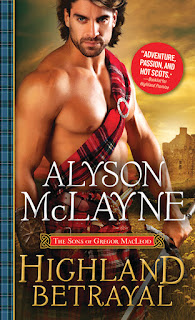 A betrothal. A betrayal. A love threatened by treachery.
Laird Callum MacLean vowed to marry Maggie MacDonnell. But when his father’s apparent suicide makes him Laird of his clan, Callum must unmask his father’s killer before bringing Maggie into his dangerous new home.
Maggie’s home isn’t any safer. When Callum fails to return, Maggie does what any resourceful Highland lass would do. She escapes—and finds herself toe-to-toe with Callum, who’s determined to fulfill his promise. Maggie can’t bring herself to trust him with her heart again. But with a traitor still at large, they must rely on each other in every way, or their clans—and their love—will be destroyed.

“’Tis dangerous here,” Maggie said, and took the reins from Callum to steer Aristotle to the side of the game trail.
Callum wrapped his arms around her waist, and she bit her lip to stop from groaning. Earlier, she’d been brought to the brink of something she’d been craving for years, ever since Callum had first touched her. Then, as now, he’d left her mind a mess and her body in need. And sitting so intimately in front of him on the horse for the last few hours, her legs spread, his fingers rubbing tiny circles over her plaid, his hands touching her but not touching her, was enough to drive her mad.
And she was sure he knew it too, the wee ablach.
He dropped his head beside hers and spoke gravely into her ear. “Maggie.”
“Aye.”
“I figured out what you didn’t tell me. What Irvin could possibly hold over your head to make you marry him.”
She glanced to the side and met his eyes but didn’t say anything.
“When I lay on the cliff, watching the castle, I saw you climb out your window and into Ross’s room. I was sick with worry you’d fall, and I thought, ‘when Maggie and I are married, I’ll get her with bairn immediately, and she’ll have to stop putting herself at risk for the sake of our bairns.’ Because you would do anything for your bairns—the same as your mother did for you, aye?”
Pain stabbed through her at the mention of her mother, and Maggie drew in a sharp breath. “That’s what Irvin intended too,” he continued, “but in a different way. The blackheart would rape you and then threaten the lives of his own bairns if you didn’t marry him and hand over the lairdship and clan. Is that right?”
She licked her lips and cleared her throat before speaking. Still, her voice sounded thick. “Aye, Irvin would blackmail me with my own bairns, but I doona think he would care who fathered them. He intended to let whoever pleased him have a turn with me until I conceived.”
Callum cursed and crushed her in his embrace. She resisted at first, holding herself stiff, unyielding, but he didn’t relent, and finally, a shuddering breath exhaled from her lungs, and she leaned against him, allowed his warmth, his strength, to comfort her.
He rubbed his cheek against hers. “I’m sorry I left you in such danger, Maggie. I thought you would be safer in your home than in mine. But we’re together now, and I willna let him have you. Say you’ll marry me, love.”
“I doona want to marry you just for safety’s sake, Callum.”
“Then marry me for every other reason that people marry. For intimacy, for children, for companionship. Let’s build a life together.”
She hesitated. “And if I say no? Will you agree to end our betrothal?”
He took his time answering. “Aye, but not immediately. I reserve the right to woo you properly. If, after a certain amount of time, it becomes obvious you are steadfast in your desire to end our betrothal, I will do so. But only if I know you’re safe.”
She rolled her eyes. “I fought off a pack of wolves, outsmarted the most conniving man I know, and successfully shot a cross bolt three hundred paces in the dark so I could ride a rope to freedom. Do you really think I need someone to keep me safe?”
“I think you need someone to stop you from killing yourself in the process,” he growled.
She twisted in his arms and frowned at him. “I take my safety verra seriously. I practiced in the woods for months before I executed my plan. I would think you of all people would appreciate that.”
“I do. And I’m proud of your skills and determination—you’ve done an incredible job surviving all this time. But...”
“But what?”
“Maybe I doona want you to just have to survive. Maybe I want you to be happy…to let me make you happy.”
Her gaze clashed with his. How could he make her happy? She didn’t trust him. Didn’t trust he wouldn’t leave like he’d done before, like her brothers had done, and everyone else in her life.
She dropped her eyes as pain blossomed in her chest. She knew she was being unfair, but the emotions wouldn’t let her go, twisting her up inside and clogging her throat. How could she fix that feeling of being…left behind?
“All right,” she finally whispered, so low she wasn’t sure he’d hear her.
He leaned closer. “All right…what? You’ll marry me? Let me make you happy?”
“Nay. I meant that I’ll agree to your bargain. I’ll let you…woo me…for a while. I willna fight you on it. But if, by the time it comes for us to part, you doona willingly let me go, I’ll…I’ll...”
“You’ll what?” he asked, and she heard the underlying amusement in his question.
She grunted and wedged the sharp point of her dagger beneath his chin. “I’ll sharpen my knives and give you a shave.” She trailed her knife down his chest and over his plaid until the point pressed against his sporran. “Down there.”
He puffed out a laugh, his eyes lighting up like the morning sky around them. “You may shave me there any time you like, lass. ’Tis in much need of my betrothed’s…steady hand.” 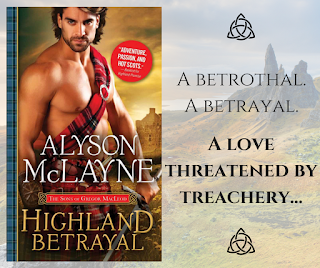 Alyson McLayne is a mom of twins and an award-winning writer of contemporary, historical, and paranormal romance. She’s also a dog lover and cat servant with a serious stash of dark chocolate. After getting her degree in theater at the University of Alberta, she promptly moved to the west coast where she worked in film for several years and met her prop master husband.
Her self-published works in contemporary romance include her Santa Barbara Billionaire Bachelor series: How To Catch A Bride, How To Claim An Heiress, and How To Outplay A Player. How To Catch A Bride (formerly The Fabrizio Bride) was recently nominated for a RONE award.