It’s a suspenseful and sensual read as two lost souls find acceptance in each other’s arms while trying to discover the truth in this series starter that will leave you wanting more.  Keep reading to get a tempting taste of Memento Mori by Lexi Blake, along with my impressions of it, then add this first installment in the Masters & Mercenaries: The Forgotten series to your bookshelf! 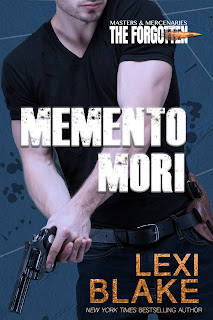 Six men with no memories of the past
One leader with no hope for the future
A man without a past
Jax woke up in a lab, his memories erased, and his mind reprogrammed to serve a mad woman’s will. After beingliberated from his prison, he pledged himself to the only thing he truly knows—his team. Six men who lost everything they were. They must make certain no one else gets their hands on thedrugs that stole their lives, all while hiding from every intelligence organization on the planet. The trail has led him to an unforgiving mountainside and a beautiful wilderness expertwho may be his only hope of finding the truth.
A woman with a bright future.
River Lee knows her way around the Colorado wilderness. She’s finally found a home in a place called Bliss after years lost in darkness. The nature guide prefers to show her clients the beauty found in the land, but she also knows the secrets the mountains hold. When she meets Jax, something about the troubled man calls to her. She agrees to lead him to the site of an abandoned government facility hidden deep in the forest. She never dreamed she was stepping into the middle of a battlefield.
A love that could heal a broken soul
Spending time with River, Jax discovers a peace he’s never known. Their passion unlocks a side of himself he didn’t even know he was missing. When an old enemy makes his first move, Jax and River find themselves fighting for their lives. But when his past is revealed, will River be caught in the crosshairs of a global conspiracy?

“This place is beautiful,” he said when she hesitated.
She nodded but didn’t move from her seat. “I love it here. I went to college in Denver, but I always missed this place. When I was younger, my dad had a house in Creede. He started the business there, but when he could, he moved us out of town. My dad was a loner, I suppose. Creede has a population of four hundred and Dad thought that was way too many people.”
“I know the feeling. I lived in London for a while. That was definitely too many people.” He kept his tone even. It was odd. Now that he was here, that hunger he always felt was tempered by her fear. He’d thought he would take anything offered to him, but he couldn’t having met her. If the blonde had offered herself up, he would have turned her down. Over the two hours they’d sat in the booth, eating fried food and drinking beer, he’d figured something out. Some people were more special than others. River was special. He should be more cynical. He could hear Damon Knight telling him to be cautious, but he couldn’t make himself do it. Perhaps it was the fact that he didn’t have a long well of history to draw from and to teach him that this was likely a mistake.
It didn’t feel like a mistake.
“Wow. I’ve never been farther than Kansas City.” She still wasn’t moving and her voice had taken on a tremulous tone.
His heart constricted, and it was surprisingly easy to not listen to his dick. His dick was pleading with him to get aggressive. His dick was trying to convince him that if he could get inside her, she would accept him.
Yeah, he wasn’t going to listen to his dick.
“If you’ve changed your mind, I can call my brother to pick me up. I have a phone and so does he. His number is programmed in. I don’t want to scare you. I had a good time talking to you tonight. It was one of the nicest nights I’ve had in a long time.” Ever. It was the best night ever. It was the first night he felt normal, though he wasn’t exactly sure what that word meant. Comfortable was a better one. That tight feeling in his chest had eased as he’d sat in the booth with River and Tucker and Heather.
Although he’d hated lying to her.
She finally turned, looking at him. Her eyes shone in the moonlight. “You mean that, don’t you?”
He wanted to touch her. He’d had to force his hands not to move toward her all night long. The most he’d allowed himself was to have their hips and shoulders touch as they’d sat next to each other. He’d decided it had been a good thing he’d sat next to her because he was fairly certain he had a case of Big Tag’s crazy eyes, and she would have seen them had he sat across from her.
“I do mean it. Please don’t get me wrong. I want you. I would like nothing more in the world than to take you into that cabin, lay you out, and make a feast of you. I want to kiss you and when I say that I don’t merely mean your lips. I want to put my mouth all over your body. But more than I want that, I want you to like me.” It was important somehow. He wouldn’t see her after tonight, but he couldn’t stand the idea that she was afraid of him.
Everyone was afraid of him. Everyone he knew was waiting for his powder keg to blow, but he’d sworn to himself earlier in the evening that it wouldn’t blow around her. He would protect her even if it was only for one night. 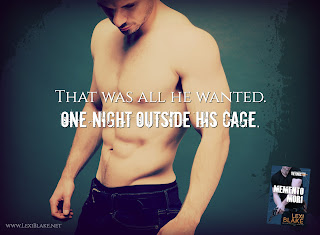 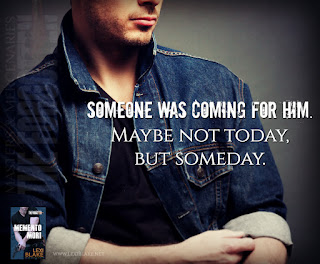 Bringing together two of her past series, Ms. Blake gives readers a sensual and suspenseful series starter that will leave them wanting more.  She takes readers to a dark place throughout this story, courtesy of the main couple’s painful pasts, before giving them a bit of light in this tale’s hard-fought HEA that’s just the beginning for a group of men trying to find themselves.

Jax, along with five other young men, endured years of pain and degradation at the hands of a madwoman before being rescued.  He remembers nothing of his life before three years ago except what he was forced into doing by a doctor bent on creating the perfect super soldier but he’s determined to find out the truth about himself.  To do that, he’ll need the help of a guarded nature guide in finding a secret underground lab where some of the experiments were performed.  During the treacherous journey he’ll find himself instantly attracted to the woman teeming with trust issues while still dealing with guilt over his own past actions which pulled at my heartstrings.  Jax is an appealing character, mysterious yet charming in his awkwardness.  He appears naive at times yet knowing the strength contained within him reminded me of how dangerous he could be. He’s an interesting dichotomy and I was rooting for him to find his past so he could make a future with River.

River’s got her own issues with a painful past of deception at the hands of a con man who professed his love for her before taking everything from her.  The recent death of her father has added to her sadness and all she wants to do is run away from it all.  Being a nature guide in the middle of nowhere is the perfect solution as she can lick her wounds with little interaction with others.  One night at a bar though introduces her to a man hurting just like her and it leads to an unforgettable connection that’s tainted from the start because of outside interference.  Fate is determined to put them together and it’s not long before she joins him in a dangerous journey to discover his past and keep it from happening to others.  River’s at a very low point at the start of the story.  Her self-esteem is in tatters and she doesn’t understand what Jax sees in her.  Their night together was supposed to instill confidence in her, but his brother’s interference left her feeling used again.  It’s a rocky start to their journey to discover the truth, one where danger lurks while they work through their emotional conflicts, and it kept me on the edge of my seat.  Through all the twists and turns though I wished for more from River, I wished she were a stronger heroine as Ms. Blake is so good at crafting them.  While I can understand her pain I wish she believed more in herself, but I’m glad she has Jax who loves her unconditionally.  As he grows, I hope she will as well in a romance that I hope we get to revisit in future installments.

This is a solid start to a new series that combines the best of both worlds, two of Ms. Blake’s beloved series, to keep me entertained.  It’s not as scorching as her other works but the romance between Jax and River kept me rooting for them every step of the way in this angst-fueled story.  Both have painful pasts but are dealing with them very differently.  Jax is living instead of hiding away like River.  He’s making up for lost time, experiencing things to learn who he is, while River seems stuck.  Having Jax in her life opened a door for her and I hope she continues to walk through it with him by her side as they’re good for each other.  Alongside this appealing main couple were The Lost Boys who were an equally intriguing cast of characters.  They had eclectic personalities, different talents and looks, but their bond was strong.  Their interactions were familial, snarky yet supportive, and I can’t wait to get to know each of them better.  Fans of Ms. Blake will enjoy this blended story, enjoy the reunion of past characters, while new fans will be counting down the days until the next installment.