Book Spotlight on Through the Fire by Katie Ruggle (GIVEAWAY)

It’s an exhilarating thrill ride of revenge and justice in this romance that will keep readers on the edge of their seats from the first page to the last.  As a female officer fights to prove herself, she finds herself surrounded by danger and unexpected romance that will captivate readers.  Keep reading to get a tempting taste of Through the Fire by Katie Ruggle, then start counting down the days until this book hits the shelves on August 28th.  In honor of this fourth installment in the Rocky Mountain K9 Unit series make sure to fill out the form below for the chance to win a prize bundle of the previous books in this series too! 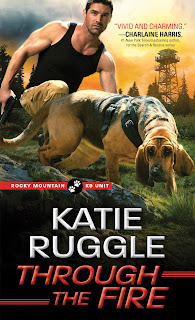 He’s tall.
He’s dark.
He’s brutally handsome...
And he may be her only hope.
Kit Jernigan despairs of ever fitting in with her new tight-knit K9 unit—they've been through too much to welcome a stranger. So when a killer strikes, it’s a fight to convince her fellow officers to trust her long enough to catch the woman she knows is responsible.
She can’t do it on her own. What she needs most is a partner: local fire spotter Wesley March.
Wes knows in his heart that Kit is right, and he's willing to leave his lonely tower to help her prove it. But the more time they spend together, the hotter the fire smolders…and the more danger they're in. A member of the K9 unit's inner circle is determined to have her revenge—no matter who gets burned in the process.
This time, it's personal.

Her hair was just as beautiful down as he’d imagined it would be. Wes shifted his weight and fought the urge to fidget with the salt and pepper shakers. He didn’t know what to do with the excess energy that was coursing through him. He’d asked her on a date, and she’d agreed. Even though hours had passed and the date had begun, he still marveled at it. If it hadn’t been horribly early, he would’ve called Leila to let her know it had worked. His bravery had been rewarded.
Seeing her was worth enduring the heavy weight of the other diners’ stares and the buzz of their whispers. He normally did his best to avoid all the townspeople, but he’d ignore their avid interest for Kit’s sake. It was difficult, though. Even the sleepy waitress gave him a curious, wide-eyed look when she stopped at their table to fill their coffee cups and chat lightly with Kit. After she walked away, Kit said quietly, “That’s Jules. She and Theo are together.”
He nodded. “You’re good with people.” She reminded him of Leila that way. Both women always seemed to say the right thing, even when they didn’t know someone. “That must be useful when you’re working.”
She studied him with a slight smile that was kind, rather than mocking. “Thank you. I’m not always the most tactful, so I sometimes get myself into trouble that way. I do best with kids.”
“I can see why. You’re both very honest.” His interactions with children had been minimal as an adult, but he remembered the sometimes brutal honesty of his peers from when he was a kid.
She laughed a little, and the sound warmed his insides. “‘Honest’ is the nice way of saying that we don’t think before we speak sometimes.”
“That can be good, though.” He couldn’t look away from her. From the sheen of her black satin hair to the way her green sweater followed her slight curves, she was riveting. He felt like he could stare at her for days and not get bored. “My sister, Leila, always tells me the truth, even when it’s uncomfortable. That’s so much easier than trying to figure out how people really feel when their words don’t match their thoughts.”
“If everyone were that honest, my job would be a lot easier.”
“That’s true.” He watched as she picked up her coffee mug with both hands and took a sip. Her fingers were small and slender, with unpolished, short nails, and he marveled that she could use them to take down people twice her size. The mention of her job reminded him of something.
“One of my neighbors stopped by the tower.”
“Rufus?” she asked, setting down her coffee. He saw a muscle twitch in her cheek and felt a remembered jolt of fear at the thought of how close she’d been to losing her life.
“No. Murphy.” She seemed to relax a little as she watched him, waiting patiently for him to continue talking. He loved how she wasn’t in a rush. Her manner calmed him and made conversation, which was usually a minefield of missed cues and uncertainty, so much easier. “He spends a lot of time in the woods south of town. Trapping, mostly.”
Wes paused, wondering if she would question him about Murphy’s activities. He’d never actually caught his neighbor in the act, but Wes had found a few illegal leg-hold traps that he was pretty sure belonged to Murphy. He was still trying to figure out the best plan to convince Murphy to stop, since the traps were dangerous, as well as cruel. Kit didn’t say anything, just kept her gaze on him, giving him her full attention.
“My neighbors don’t trust law enforcement…or any government agency, really. In the last year, they’ve started to come to me with a few things. They know I work for the forest service, so I believe they consider me an intermediary, someone halfway between them and the government, if that makes sense?”
“It does.” Her coffee forgotten, she stayed completely locked on him, and he felt the rush of that focused interest. “You’re their backwoods ambassador.”
His laugh was a surprise, even to him, more pleased than amused. It was such a pleasure to be understood. “Yes. Exactly. I pass on the information they give me to the right agency, and they can hold on to their anonymity.”
“Win-win.” Pushing her coffee mug aside, she laid her forearms on the table so she could lean even closer to him. “What did Murphy tell you?”
“Are you still working on the case of the house that burned down last Monday?” Even if she wasn’t, he still planned to tell her the information he’d gotten from Murphy. If he was the backwoods ambassador, then she was the Wes ambassador. He was acquainted with the other cops, and he didn’t have any problem with them since the crooked lieutenant had been arrested a few weeks ago, but he already trusted Kit. She might have been new to the area, but he had a gut-deep feeling that she wouldn’t betray him.
“Yes.”
Wes lowered his voice, even though the closest other diners were several tables away. “Murphy was checking his traps and saw someone leave that house minutes before it went up in flames.”
“How close was he?” Kit had softened her voice to match his.
“Approximately fifteen feet from the edge of the house’s backyard.”
“Could he describe the person? Does he know them?” Although the words were quiet, there was an urgency to them that made his blood run faster. It wasn’t a bad feeling. Ever since he’d met Kit, he’d felt so much more alive. 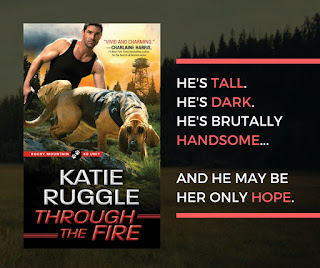