Ms. Alexander’s Wild Sparks series introduced readers to the funny and sexy Greg Rodwell, a hero who showed himself to be a loyal friend, one quick to defuse a situation with humor.  With this standalone tale though, readers get deeper insight into this engaging character whose humor hides a wealth of pain from a past of bad decisions and unkind fate.  Keep reading to get a tempting taste of Unscrewed by Ren Alexander, then add it to your bookshelf.  In honor of this contemporary romance full of surprising moments, make sure to fill out the form below for the chance to win a $15 Amazon GC too! 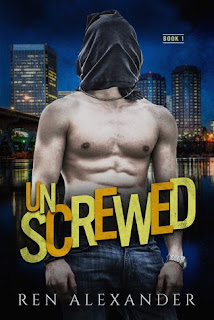 Greg Rodwell.
The myth, the man, the legend.
Yeah. I’m none of that crap.
Okay. I’m a man. There’s that much.
Almost everyone calls me Rod, whether I like it or not. I’m the guy others look to for a laugh, a dirty joke, a distraction—the office clown. Even my best friend, Hadley, laughs.
It’s just that, I’m not always laughing. Not even on the inside. Nobody knows the real Greg or the agony I hide with humor. My recently dead sister had a clue, but she’s in no position to blab. I screwed up big time—then and now—but it’s all my undoing. Through everything, Hadley’s been my cure and my curse. And I fell in love with my married best friend. But she wasn’t always married, and I wasn’t always broken.
I had a millisecond of a chance, but I blew it, siding with morality. What guy does that? And sailing that sinking ship all the way down, I sacrificed my wants for her needs. Doing that, I fathered a kid with the office trouser troll. Stupid? Hell to the yes. Because now, regardless of the grand total, I want something I can’t have. Integrity and my sanity be damned.
But nobody, especially Hadley, can know the real Greg Rodwell, my tortured soul, my unashamed love, or my darkest truth, because it wouldn’t just blow her mind.
It would rock our damn world.

Ren Alexander was born in Wheeling, West Virginia. She graduated from West Liberty University, where she received a B.S. in criminal justice. Although interested in that field, her true passion was reading and writing. She currently lives in Detroit, Michigan with her husband, two daughters, and two cats.
Ren's novel, "The Keys to Jericho," was chosen as an "Official Selection" in the Romance category of Apple Literary's 2017 Annual Book Awards.