It’s a sensual friends-to-lovers romance found amongst the pages of this hockey-fueled tale of a young woman who’s loved her best friend for years and who now wants more from him in her plan to lose her V-Card.  Keep reading to get a tempting taste of Cross Crease by Elizabeth Hartey, along with getting my impressions of this contemporary book, then visit the other sites hosting this tour to learn even more about this book.  In honor of this third installment in the On the Edge series make sure to fill out the form below for the chance to win a $15 bookstore GC too! 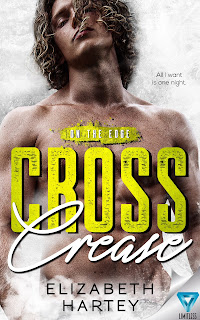 Heaven
I was fourteen the first time I laid eyes on the smoking hot goalie. Damon Wolfe was the most gorgeous boy I’d ever seen. All it took was one glance, one sentence and my heart was his.
But I was too young and he was too broken.
Seven years later, he’s the biggest off-the-ice-player in the NHL and I’m his virginal best friend—a problem I have the perfect solution to. But Wolfe refuses to help me out. He claims he doesn’t want to ruin our friendship.
Yet, somehow, his eyes say something different whenever he looks at me. The way I see it, it’s only one night. What’s the worst that can happen?
Wolfe
The first time I looked into those sparkling turquoise eyes, I was a goner. Heaven had a mouth full of braces and bruised knees but she was the most beautiful girl I’d ever seen. With one look, she sent all my inner demons running.
But she was just a kid and I was too damaged.
Seven years later, Heaven is now my best friend. My best friend with a single-minded mission—to get laid.
She wants me to take her virginity and teach her about sex. But she's so far out of the realm of anything my blackened heart deserves it's laughable.
So, how come I’m not laughing? How come my best friend is all I think about? More importantly, what am I going to do to protect her—from me?

Slamming my book closed, I heave out another huge, exasperated sigh. Ever since our first meeting four years ago, we have this unknowingly-provocative-on-Wolfe’s-part-game we play exchanging cornball pick-up lines. After Wolfe playfully teased me with one the first time I met him, I decided I wasn’t going to stand there like some star-struck little fangirl when he taunted me. So, I honed my cheese whiz pick-up line skills and gave them right back to him.
“Hey, D! Guess what I’m wearing?” I quip, standing up on the blanket as he walks toward me. His wry grin morphs to a wide-eyed, shocked expression before it’s quickly replaced by his usual indifferent smug look.
“W…what are you wearing?”
“The smile you gave me.” I hold my arms out in a ta-da position as I deliver the corny line.
“Holy shit, Pip. When did you grow tits?” He smirks while shoving his board into an upright position in the sand.
“Right about the time you were away at school learning to be an even bigger ass.” I tilt my head and smirk right back at him.
“Real nice. You kiss your mother with that mouth?” He pulls the elastic from around his man bun and flops down on his back on the blanket next to me, stretching his arms over his head. His chest muscles ripple causing my heart muscle to undulate like a series of corduroy ocean swells. I clench my gaping mouth closed and swallow the gasp I refuse to let him hear.
Ugh. The present man candy dominating my panorama is too much. As I lay on my side on the blanket facing Wolfe, my hip pressing into the soft sand, my thoughts drift to him. My body temperature soars, not from the blazing sun or the warm baked sand, and not even from the steamy sex scene I was reading. It’s the red-hot images smoldering through my mind—all the things I’d like to be doing with him, which have me panting.

Though the theme of this story is a familiar one I still found myself drawn to it courtesy of its sizzling sexual tension and laugh out loud banter and cheesy pick-up lines.  Wolfe and Heaven’s journey to HEA is a rocky one too with numerous moments of frustration that had me wanting to smack Wolfe a time or two.  On a whole though I found this a charming read that put a smile on my face despite my occasional quibble.

Wolfe was drawn to Heaven the moment they met as youngsters but she was forbidden fruit as his best friend’s little sister meant keeping his hands to himself.  Years passed and he still found himself drawn to her and living as just friends but he saw her as too good for him considering his own past.  It’s a past that he’s ashamed of as he has more worth than just being a playa.  The moment she asked him to take her V-Card though is the moment where everything changed between them in their push-pull journey to HEA...a journey full of unnecessary melodrama.  Wolfe’s a frustrating character at times courtesy of a past that has him feeling unworthy of something good but I was still drawn to him for all the care and support he gave to Heaven.  Being with Heaven made him a better man though and as their journey continued his self-esteem also grew.

Heaven was a young teen when we first meet her here, a teen with stars in her eyes and an instant desire for the sexy goalie.  It’s a desire that never goes away and despite his numerous encounters with other women she never gives up on claiming him.  Her plan to get him to take her V-Card is a theme I’ve read before and while it seems silly, it works in this story.  Having a connection that started so long ago made her plan a bit more reasonable though as they’ve had a lot of years getting to know each other in a journey that’s rewarding in the end.  Heaven’s a good girl, one who believes only she is meant for Wolfe and sets out to prove it to him.  She’s a bit naive at times, a bit frustrating for idly sitting by and watching him with other women.  I kept waiting for her to get more of a backbone in their connection but it took awhile before I saw her becoming empowered.

On a whole this was an enjoyable story with a couple whose connection sizzled. The nature of their romance being forbidden also added to the sizzle of this story full of erotically-charged encounters.  This main couple appeared in the previous installments in this series but it’s here where readers really get to know them, giving insight into Wolfe’s emotional past and making his actions more understandable.  While this is a satisfying story for the most part I found it to be a bit of rough around the edges with a narrative that needed to be cleaner, a narrative that needed far less melodrama.  Fans of the friends-to-lover theme will find this tale a good one that stands strongly on its own but that will have you wanting to read the previous installments to see where this romance all started.

As a lover of the northeast United States, Elizabeth moved with her husband to the Poconos several years ago to open a Chiropractic Clinic. Four children and a menagerie of animals later, she has finally found time to fulfill her lifelong dream of writing novels. A dreamer at heart, romance is the genre she spends most of her time writing and reading into the wee hours of the morning. When not juggling work responsibilities and writing, she enjoys hiking the beautiful hills and woods around her home, swimming, knitting, travelling, and spending time with her family. She is an avid hockey fan, which means she has to compromise with her husband, one night of hockey for her, in exchange for one night of football for him.