A woman betrayed at the altar decides to finally live life for herself when she finds an unexpected attraction to a hockey player while on her honeymoon that leads to something more 14 months later.  Keep reading to get a tempting taste of Knox by Brenda Rothert, along with my impressions of it, then add this fourth installment in the Chicago Blaze series to your bookshelf! 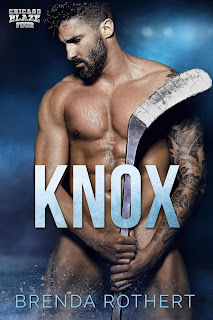 Reese
I’m done.
Getting ditched at the altar is nothing compared to being humiliated there in front of three hundred shocked guests. Apparently I’m no good at spotting the signs your man’s a cheating liar. So I set off solo on my honeymoon to Hawaii, where I realize I’ve got this life thing down just fine on my own.
Friendships and laughter? Yes.
Adventures? Absolutely.
But relationships? Hell no. Never again.
Knox
I’m a man of few words. My reputation as a moody prick is deserved, but only the handful of people who really know me see the man beneath the professional mask.
I’m a protector. A warrior. That part is true. But the world doesn’t get to see the rest of me. And women don’t seem to mind my gruff exterior—my bed’s always warm.
I’m content with life—loving it, even—or so I thought. But when I meet a beautiful pastry chef with a broken heart and a smile that softens me down to my soul, I realize I wasn’t really content at all before her.
I only wish I had the words to let her know.

By the time we all sit down for dinner at the table of the outdoor patio, I’m so hungry I just eat in silence until I’ve thrown back half of my steak. I’m sitting next to Luca’s niece Emerson, who keeps grinning at me.
“What?” I finally ask her.
Her eyes get wide, but still have that mischievous sparkle. “Can I touch your beard?”
A single note of laughter bursts out of me.
“Have at it,” I say, setting down my fork and bending closer to her.
She extends her little hand tentatively, pausing right before she gets to my dark, short beard.
“It doesn’t look like Santa’s,” she whispers.
When her fingertips graze over my beard, her lips part with surprise.
“It’s so…hairy,” she says.
“That’s because he’s part wolf,” Victor says from across the table.
Emerson’s eyes grow as big as saucers as she pulls her hand away.
“If you hear howling tonight,” Vic tells her with a serious look, “it’s him.”
When Emerson turns to me questioningly, I just shrug.
“He scares our opponents on the ice by growling at them,” Vic continues. “One guy pooped his pants when Knox growled at him.”
From beside him, his girlfriend Lindy gives him a look. “Really? While we’re eating?”
I can’t help laughing at the memory. Chris McMorrow did shit himself as I was taking off my gloves to throw down with him on the ice during a game a couple years ago. He gave me a look of horror that made me freeze in place.
“I think I’m sick,” he’d said. “I just shit myself. Can we do this another time?”
Dumbstruck, I’d told him we could and called one of his teammates over to help him off the ice. Poor dude found out he had a nasty infection in his colon. But from then on, I was known as the guy who made another enforcer shit himself at the thought of fighting me.
Emerson now looks terrified of me. I don’t like that. I lean closer to her once again.
“I’m a nice wolf,” I assure her.
She lowers her brows, still looking concerned. “I don’t want to poop my pants.”
“Never. I only do that to the other team’s enforcers on the ice.”
A smile plays on her lips as Abby sets bowls of pineapple on the table for “dessert.”
I speak into Emerson’s ear. “Hey, I snagged some chocolate chip ice cream at the store, what do you say we go get some?” 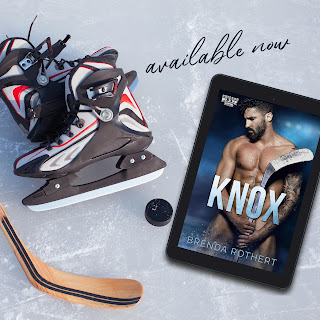 Ms. Rothert has crafted an entertaining series with the Chicago Blaze hockey team, one full of sexy players with hidden hearts of gold who have found that one woman to complete them.  Knox has those same elements, along with moments of humor, and it captivated me from the main couple’s delightful first meeting to their heartwarming HEA.  By the turn of the final page Knox is another wonderful addition to the series with unforgettable characters and a storyline that ran the gamut when it came to emotions and it has me counting down the days until we can revisit the team.

Knox Deveraux is a legacy in the hockey world as his father was once a star player with Knox now following in his footsteps.  He’s currently at the top of his game, loving his life as a bachelor with short-term interactions with women more than enough.  On a trip to Hawaii with his teammates though he gets a glimpse of the happiness having someone of your own brings his teammates and it starts him thinking differently.  Those thoughts grow bigger once he rescues a woman trapped in the ocean after her top falls off in an unforgettable meeting that changes everything for the both of them.  His time with Reese is short but they spend a lot of time talking with sexual tension increasing with the clock ticking away until they part.  Thinking he won’t see Reese again has him desperate to spend as much time with her as possible in crackling encounters both sensual and humorous.  Fate though has a different plan as after 14 months apart they find themselves face-to-face with their connection just as sizzling as it was in Hawaii.  When readers first meet Knox they see a brooding and quiet man, a commanding one with a sense of honor who lets Reese set the pace of their reunion.  He’s a carefree man too, but when it comes to hockey and his father’s cancer diagnosis he’s very serious and I felt particularly sympathetic when he was with his dad as their scenes brought a tear or two to my eye.  His interactions with Reese had them starting out as friends, getting to know each other’s deepest thoughts, and becoming oh so much more as the story progressed while putting a smile on my face and making me laugh often.  On a whole Knox is a wonderful hero full of heart and soul and I loved watching him work to earn Reese’s love in a slow and steady journey to HEA.

Reese Dalton is a successful pastry chef who had been with the same man for years when she discovers, at the altar, his affairs with two of her friends.  That discovery has her running for freedom, rethinking her life while taking a honeymoon for one to Hawaii.  She plans to spend the trip all on her own as she’s done with men and relationships, but after losing her top in the ocean she’s left needing a hero...and luckily Knox is in the right place at the right time in a delightful first encounter that leads to a wonderful pairing that turns into a sizzling one-night stand.  After 14 months apart she finds herself eye to eye with Knox once again with the sizzle still going strong.  Reese is still hesitant to be anything more than a friend to him as she likes her life the way it is now.  She’s no longer living a life of superficiality, now doing things important and meaningful to her, which has her donating her time to a woman’s shelter which made me like her all the more.  Her work there brings a serious tone to the story as well as introducing readers to another wonderful character by the name of Angelia.  Reese’s reunion with Knox has them starting out as friends, oozing sexual tension along the way, in a slow burn to HEA that has Knox charming her (and us) every step of the way.  Reese is a likable heroine who fit in nicely with Knox’s teammates and their wives.  She never pushed for more as she was very comfortable in her own skin, sticking up for herself and her desires.  She did make a misstep or two along the way though, jumping to hurtful conclusions, conclusions which frustrated me but were related to the doubts her ex imbued in her.  Despite her actions late in the story, she and Knox were fun to watch, with flirty interactions and heartfelt talks that had me cheering for them every step of the way.

This was an entertaining journey to HEA in a tale of second chances set in the world of hockey.  With its wonderful hero readers get a man whose sexiness is equal to his kind heart, while also getting a heroine who’s strong-willed and empowered by all that befell her.  They have a crackling connection too full of laughter and a few tears that had me frantically turning the pages in anticipation.  It’s a slow burn for these two but it’s a journey that held me captive, delighting me almost every step of the way.  Surrounding this appealing main couple was an equally likable cast of secondary characters, some who we’ve seen before along with one or two new ones.  I enjoyed seeing past hockey players and their wives and getting an update on their HEAs along with seeing players not yet paired off.  The team’s a boisterous and playful group who are supportive when need be and with a strong familial vibe between them.  Of the other characters in the story I was especially drawn to Angelia who works at a woman’s shelter and carries scars caused by acid thrown by her ex.  She’s strong and sassy and wears her scars like a badge of honor.  The new owner of the team, Olivier Durand, also left me curious to know more as he truly has a kind heart and is protective of his players while being a man of mystery.  From start to finish this was a well-crafted romance with a near-perfect hero who I’m still thinking of as I breathlessly await the next book in this decadently delightful series!

My rating for this is an B+/A- 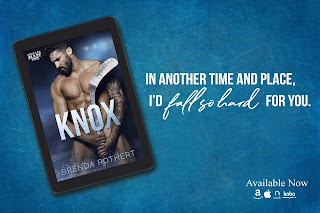