It’s a complicated romance between two people who have no business being together in this sensual and suspenseful tale set in the mafia world.  Keep reading to get a tempting taste of Bene by Bethany-Kris, then start counting down the days until this book hits shelves on November 11th.  In honor of this fifth installment in The Guzzi Legacy series make sure to fill out the form below for the chance to win a surprise signed book too! 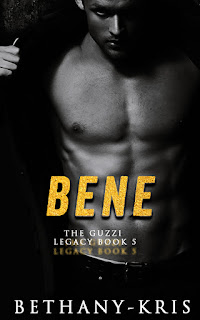 A vendetta can change everything...
Bene Guzzi is walking a fine line. In his family, the mafia, and even with his own twin. Being a Guzzi principe means he doesn't have time to be a screw up, so he needs to fix it and fast.
Vanna Falco is nothing that she seems. Her angel's face hides a past filled with pain and her secrets might be enough to finally take the Guzzi family down for good. That is, if no one finds out the truth.
But everything gets trickier when people who shouldn't be together, start to fall hard. And no one is more dangerous than a Guzzi in love.
The lies between them, though?
Well, they might ruin it all.

Until, of course, she heard someone mutter, “If you’re gonna do that, could you fucking move it outside to the alley like every other bitch that’ll get on her knees does, and give someone else the table?”
Vanna stiffened the second Bene’s lips stilled against her own. She physically felt the change in his posture, and sensed it, too. Like his playful, sexiness had left him just like that, and the heat in his gaze suddenly burned with more rage than it did lust when his stare met hers.
She didn’t know why she thought to speak to defuse the situation, but she still did. Or at least, she tried. “It’s fine. Just ignore him. It’s o—“
That was all Vanna managed to say before Bene pushed away from her. He spun sideways, as though he had just known the asshole came up to his right without even looking that way when he had been distracted with her. His fist was already flying, crashing into the face of the man before Vanna even had time to think about what was happening.
And then as fast as it happened, it was over. Bene spun on his heels, a dark grin tugging at his lips when her wide—slightly amused, but also terrified—gaze met his. Yes, she’d seen a man hit another man over her before. But no, she had never quite liked it the way she did right then.
The man hadn’t even hit the floor before Bene’s hand found hers, and he pulled her off the pool table, grabbing her bag from the floor at the same time, and moved them toward the back entrance of the bar. She peeked over her shoulder in just enough time, right before they darted out the back doors, to see the bartender coming around the bar.
They were already gone.
It was over.
That’s how fast it happened.
Her hand stayed tucked tightly with Bene’s as he pulled her through the back alley behind the bar, and through the maze of another three. He didn’t stop until they were one block down, and she recognized the familiar brick design of his building. Except it was the side, and not the front. Not that it mattered to her when he pressed her into the brick, his body crowding hers in the best way, leg slipping between her thighs to give her pussy something to grind on while he kissed her harder than ever.
Until her lungs burned.
And all she saw was him.
His hands skimmed over the front of her jeans, unsnapping the button and pulling down the zipper before sliding underneath. She stared down the alley to the busy street where people bustled on by. Not to mention, all the windows around them. What were the chances that this alley would be empty at this time of night? And still, anyone could see them there, if they just thought to look.
Vanna still didn’t care.
“That was crazy,” she breathed against his mouth.
Bene chuckled, lips curving with hers. “Worth it.”
“Shouldn’t make a woman run in heels, Bene.”
“Can I fuck one in them?”
Vanna groaned. “Yes.” 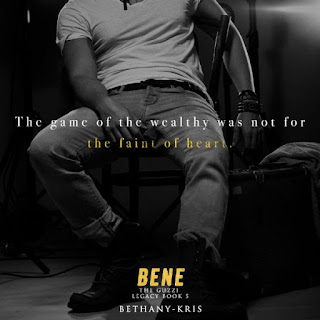 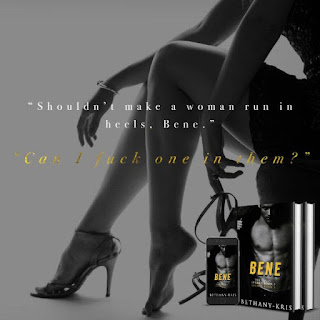 Bethany-Kris is a Canadian author, lover of much, and mother to four young sons, one cat, and two dogs. A small town in Eastern Canada where she was born and raised is where she has always called home. With her boys under her feet, snuggling cat, barking dogs, and a hubby calling over his shoulder, she is nearly always writing something...when she can find the time.