Opposites attract when a man who suddenly becomes a billionaire finds himself ready to take on the real estate world, but instead finds himself battling a strong-willed woman defending the wildlife his plan would destroy. Keep reading to get a tempting taste of Enamored by J.S. Scott, then add it to your bookshelf.  In honor of this third installment in The Accidental Billionaires series make sure to fill out the form below for the chance to win a digital copy of this book along with a $25 Amazon GC too! 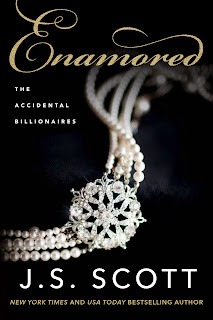 Like his brothers and sisters, Seth Sinclair went from blue-collar to billionaire overnight, and he’s decided to invest in what he knows best: construction. There’s only one thing in his way—the endangered birds nesting on a piece of prime beachfront real estate. And fighting for the birds is Riley Montgomery, a stubborn, pain-in-the-ass, drop-dead-gorgeous environmental lawyer. The worst part? Seth will do anything to keep her around—even if it means hiring her to be his fake girlfriend.
With a cause to fight for, Riley agrees to Seth’s scheme. If she keeps the superficial women away from Seth, then he’ll leave the wildlife sanctuary alone. But pretending to be his girlfriend comes with ground rules: No ass grabbing. And absolutely no sex. Ever. The problem? The sexual tension sizzles when they’re together.
Seth isn’t so keen on Riley’s rules, but he’ll keep his word, at least until she decides otherwise. But bringing Riley into his circle has brought her past back to haunt her in ways that neither of them expected. Now it’s less about broken rules and more about broken hearts, and Seth will do whatever it takes to protect the woman he loves.

“You said you’d trade for my services,” I prompted. “But I don’t have much to offer to a man like you.”
He studied me for a moment, which made me uncomfortable.
I didn’t want anyone to know me better.
A man like Seth would never understand me.
“You have a hell of a lot to offer any guy,” he considered.
“Not exactly true,” I disagreed. “I was engaged once, but I was never enough for Nolan Easton,” I muttered, instantly wishing the name hadn’t left my mouth.
For some odd reason, Seth was easy to talk to, but I needed to guard my words better.
He whistled softly. “Nolan Easton? Head of Easton Investment Firms? The very wealthy Nolan Easton?”
“Yes,” I said tightly.
“Even so, I can’t believe he dumped you,” Seth answered.
“He didn’t,” I admitted. “I finally broke it off. He didn’t know how to keep it in his pants, and I didn’t want to spend my entire life being who he wanted me to be.” I coughed nervously. “Now can we get back to the business at hand?”
“Not yet,” he insisted. “I’m still trying to get why any guy would want to change a single thing about you. Not that I exactly love your line of work right now, but you’re passionate about it. You’re beautiful. You’re smart. You seem to know exactly what you want. Considering our circumstances, I can’t say I’ve seen your sense of humor, but I’m assuming you have one of those, too. What the hell else did he want?”
I ignored his question. “I have three older brothers,” I shared. “I have to have a sense of humor or they’d drive me crazy.”
He rested his arms on the table and leaned forward. “You didn’t answer my question, Riley. What else did he want?” His voice was low and persuasive.
“It’s not important. My engagement has been over for a while, and I’m happy. I finally found my own home here in Citrus Beach, and I’m pretty content with being alone. It’s a lot nicer here than San Diego. Quieter.”
It was a hell of a lot better than being with a man who made me feel like I was less than nothing.
“When exactly did you move here? And where are you living now?”
“Almost two years ago,” I ground out, growing impatient to get back to business. It wasn’t wise to dump a lot about my personal life to a defendant—no matter how good a listener he might be. “I had a condo, but I recently purchased your sister’s cottage. I’ve settled there now. She and Eli have the bigger home next door, so I already knew I’d have good neighbors.”
“I’m right down the beach from there,” Seth said, sounding surprised. “I’ve never seen you.”
“Like I said. It’s recent. I just moved in.”
I was squirming in my chair. I didn’t care for the feeling of being interrogated. I was usually the one asking the questions.
He shot me a playful grin that made my heart trip. “Welcome to the neighborhood,” he said jokingly.
“Thanks,” I said uncomfortably. “Now tell me what you want from me to leave that piece of property alone.”
He took his time answering, and the silence seemed to stretch out forever.
I gulped down the last of my tea while I waited for him to answer.
Was he playing with me?
Or did he actually have some kind of proposition?
Probably the former—since I really didn’t have much to offer him in the way of services. I could guarantee that Eli Stone had set Seth up with his gaggle of business attorneys. Why in the hell would he need an environmental attorney?
“If you’re playing with me, this encounter ends right now,” I said tersely.
“I’m not,” he said emphatically. “I’m just wondering how to explain what I want.”
“If it’s acceptable, I’ll write up the contract today,” I offered.
“It’s not exactly the contract I’m thinking about,” he said thoughtfully.
God, I was jittery, and I wasn’t used to feeling that way. I was pretty certain that it wasn’t the extra-large chai I’d just consumed, either.
It was him.
Maybe it was the way he studied me.
Or the way his steely gray eyes never left my face.
I couldn’t read him, and that completely pissed me off. As an attorney, I’d gotten very good at judging exactly where a defendant’s mind might be, and what their motives were.
“Just name your terms,” I said irritably. “I’ll work out the details.”
I forced myself to meet his eyes in what I thought would be a battle of wills, and then was sorry that I had even glanced his direction.
My breath hitched as I fell into a stormy gaze that wouldn’t let me go.
I was stunned at the possessive way he eyed me.
I was confused about the emotions I saw there.
And I was mesmerized by the carnal desire that flared up in his steely irises like a bolt of lightning as he held me still with a single look, unable to rip myself away from his fixed stare that was holding me in place.
I knew I was blushing like a damn teenage girl with her first major crush. My brain was begging my body not to react, but my stupid body wasn’t listening.
His voice was hoarse and beguiling when he finally said, “I need a woman, Riley. And that woman has to be you.”

J.S. “Jan” Scott is the New York Times and USA Today bestselling author of numerous contemporary and paranormal romances, including the Sinclairs and the Accidental Billionaires series. She’s an avid reader of all types of books and literature, but romance has always been her genre of choice—so she writes what she loves to read: stories that are almost always steamy, generally feature an alpha male, and have a happily ever after, because she just can’t seem to write them any other way! Jan loves to connect with readers.