Twists and turns abound in this sweet Regency-fueled romance where an orphaned schoolteacher finds herself ordered to marry a duke’s son.  Keep reading to get a tempting taste of Miss Felicity’s Dilemma by Eileen Dreyer then visit the other sites hosting this tour.  In honor of this seventh installment in the Drake’s Rakes series make sure to fill out the form below for the chance to win a $25 bookstore GC too! 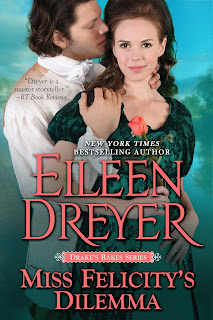 ALL SHE WANTS IS HER OWN HOME
Miss Felicity Chambers is the new teacher of piano and deportment at Miss Manville’s Academy for Superior Girls. There is no reason a duke should contact her. There is certainly no reason she should marry his son. But that is evidently what the duke wants. Felicity should be delighted. But the orphaned schoolteacher has long since stopped believing in fairy tales. If only the duke’s son weren’t so compelling...
ALL HE WANTS IS THIS HOME
Lord Flint Bracken knows just what is behind the duke’s command, and it isn’t an attempt to secure a happily-ever-after for his son. The proposal is one of the duke’s schemes. Flint has no choice but to cooperate, though, or he risks more than his home. He risks national security. So court a penniless schoolteacher he must. He should be furious. But Felicity Chambers isn’t at all what he expected. She might very well be what he wants...

It wasn't until she heard the door close that she breathed a sigh of relief. Time to escape from under the bed.
“Aren’t you growing cramped under there?” Lord Flint suddenly asked.
Felicity’s eyes flew open to find an upside-down face where the boots had been. Her heart dropped like a stone.
“Not at all,” she said, proud at how composed she sounded. “I am quite petite. But you really should have someone sweep under here. The dust balls are the size of wolfhounds.”
He reached a hand under the bed. For a moment Felicity just stared at it, unable to move. Even in the shadows it was a beautiful hand, with long, elegant fingers and a strong wrist. And she noticed beautiful hands. She was also, after all, the substitute art teacher for Miss Manners Academy for Superior Girls.
“I'm getting a crick in my neck,” Lord Flint growled, wiggling his fingers.
Felicity gave up and took hold. And gasped. It felt as if she'd been rubbing her stockinged feet on the carpet on a cold winter’s day and gotten a shock. She had heard of such a thing, of course, in every Minerva Press novel she had ever secreted under her pillow. But she had always thought it a literary device. A myth.
That was no myth tingling up her arm.
Before she had a chance to do more than stare at the offending member, Lord Flint grasped her tightly and pulled her out from under the bed. She came out in a tangle of arms and legs, dragging dust after her.
How mortifying, she thought, brushing madly at her sensible gray kerseymere skirts.
“Er...”
She looked up and forgot what she was going to say. She forgot her name.
He was beautiful. Tall and lean and russet-haired, with eyes the color of spring leaves and a humorous cant to his mouth. Chiseled features, square shoulders, slim hips. Hard and sharp as quartz.
Suddenly his name wasn’t so funny.

New York Times Bestselling, award-winning author Eileen Dreyer has published 40 novels and 10 short stories under her name and that of her evil twin, Kathleen Korbel in contemporary romance, paranormal romance, historical romance, romantic suspense, mystery and medical forensic suspense. A proud member of RWA's Hall of FAME, she also has numerous awards from RT BookLovers and an Anthony nomination for mystery. She is now focusing on what she calls historic romantic adventure in her DRAKE'S RAKES series. A native of St. Louis, she still lives there with her family. She has animals but refuses to subject them to the limelight.