Fans of rock star romances will find themselves drawn to this tale of a singer whose life implodes when he finds his long-term girlfriend cheating on him with his best friend and lead guitarist.  The fallout from that discovery changes his life irrevocably while introducing him to a woman who challenges him both personally and professionally.  Keep reading to get a tempting taste of Viral by T Gephart, along with getting my impressions of this sexy and snarky romance, then add this sizzling story to your bookshelf too! 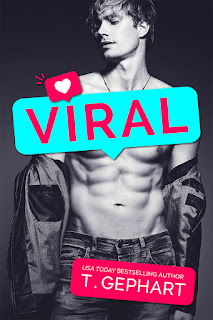 White Trash Circus will be taking an extended break and won’t be playing any time in the foreseeable future. Please lodge all your complaints to my guitarist—and my ex best friend—who I found inside the girlfriend I’ve had since high school. I will pull the freaking knife from my back and continue—without either of them—when the time is right. With enough hate and anger coursing through my veins to keep me in therapy for life, I’m going to save my cash and let the music heal me. Prepare all your bleeding hearts to be tormented with the most righteous, heavy and cataclysmic tunes to ever come out of me. So there’s that to look forward to. Thank you for all the support over the years, the gigs, the love and most of all memories. Don’t trust anyone and stay metal—Vaughan.
PS. Connor, you left your guitar and rig at my house so I took the liberty of relocating it to my front lawn. I might have dropped it on the way out the door. In your own words, brother, “Sometimes stuff just happens.”
PPS. Our drummer spontaneously combusted and is no longer with us.
WhiteTrashMegaFan- Whoa! Is this real?
VaughanLover4Eva - I love you Vaughan, you were too good for her anyway. I want to have your babies.
HeavyBrad69– So rock and roll!! Can’t wait for the new stuff, it’s going to be metal AF!
Nico – Ummm, Vaughan, what about me?
LicksNStick - LOL awks
White Trash Circus – No one cares about the bass player, Nico. 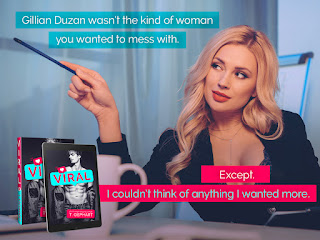 As a fan of rock star romances I was immediately drawn to this story the moment I read the book blurb.  With each turn of the page I found a hero who was cocky but had a surprising heart of gold when it came to matters of the heart, along with a strong-willed heroine determined to make him a star despite what her heart wants.  From the first page to the last readers will find a fun and flirty read with witty banter and a romance that brought a smile to my face along with a blush or two.

At one time Vaughan Hale was happy with his life with a band with a small but loyal fan base and a girlfriend who seemed loyal too.  All that changed though when he found his bandmate (and best friend) sleeping with his girlfriend.  A few drinks, or more accurately a drunken binge, soon led to a media post that changed everything for him, not only personally but professionally too in a journey with an unexpected twist or two along the way to HEA.  Vaughan’s not your typical rock star which is just part of the reason why I liked him so much.  He had a loving heart and a bold personality that told it like it was. There was no subterfuge with him and you always knew what he was thinking as he oftentimes spoke before he thought.  He enjoys being in a relationship, is quick to fall in love, and finds it a comfort being part of a pair which is why he was so hurt by his friend’s betrayal.  Many of his words and deeds utterly charmed me too while his bluntness gave a few laughs along the way which endeared him to me even more.  Once he admitted to himself how much he liked Gillian there was no holding him back as he’d do anything to win her over in a journey that had me rooting for them every step of the way.

Gillian Duzan’s a star maker as part of the Domination music company owned by her father.  She’s spent years making a name for herself, kept her personal life far away from her professional one, which has made for a rather lonely but successful life.  She’s used to loneliness though as her father has always treated her with indifference along with numerous step-mothers who considered her an inconvenience.  All of that has made Gillian a formidable agent in the music world but the image she conveys to others is one of an ice queen.  She’s quiet and controlled with a no nonsense look.  Before meeting Vaughan she knew exactly what she wanted and where life was taking her, but with Vaughan growing ever closer to her she’s full of uncertainty.  There’s definitely attraction between them but she’s leery of letting him get too close as her past leaves her leery of love and emotions.  Is there a way though to really have it all?  Can she embrace her feminine side and find HEA with a rock star or will she lose everything she’s worked so hard for?  Through it all Gillian’s a strong-willed woman who’s shown herself to be more than capable and considering her past I really wanted her to have a HEA.


This story had a delightful beginning, one that was unforgettable and spoke volumes about this hero with his unabashed personality and outspokenness.  Vaughan was bold, fun, and flirty and enjoyed Gillian not easily falling at his feet.  He enjoyed her tough and controlled exterior and it made for a sizzling journey to HEA full of sexual tension.  This was a formidable pair who each had to give and take along the way as they learned more about themselves in a story that culminated in a richly rewarding conclusion. Along with this appealing main couple was an equally entertaining cast of secondary characters, most notably Nico.  Nico was laid back and never took Vaughan’s harsh words to heart and in so doing proved himself to be a very good friend.  I enjoyed his subtle support and likable personality and I hope to see more of him in the future. Other characters who captured my attention were Emily, Austin, and Declan and each is worthy of a story of their own.  On a whole this was an immensely satisfying romance set in the rock star world and full of laugh out loud moments balanced with sizzling chemistry that I highly recommend. 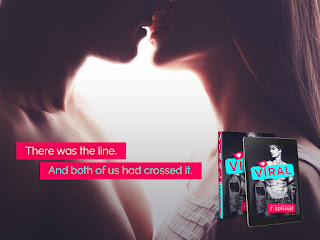 T Gephart is a USA Today and International bestselling author from Melbourne, Australia.
With an approach to life that is somewhat unconventional, she prefers to fly by the seat of her pants rather than adhere to some rigid roadmap. Her lack of "plan" has resulted in a rather interesting and eclectic resume, which reads more like the fiction she writes than an actual employment history. She'd tell you all about it, but the statute of limitations hasn't expired yet. But all those crazy twists and turns have led her to a career she loves—writing romantic comedy.
When she isn't filling pages with sassy and sexy characters with attitude, she's living her own reality show in the 'burbs of Melbourne with her American husband, two teenage children, and her fur child—Woodley.
She loves adventure, to laugh, travel, and strives to live her life to the fullest.