It’s a sizzling story found amongst the pages of this book as a biker dealing with the grief of his mother’s death and a woman looking to keep hidden from her past discover that their one-night stand is becoming something much more permanent.  Keep reading to get a tempting taste of Shifting Gears by Janine Infante Bosco, along with my impressions of it, then add this first installment in the Satan’s Knights Prospect Trilogy to your bookshelf. 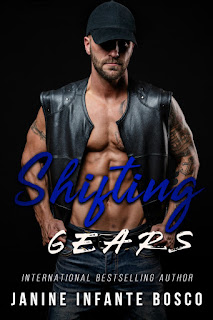 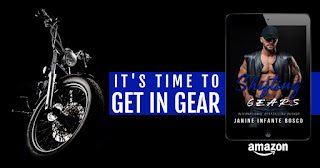 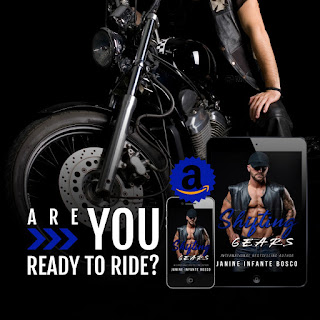 Readers are once again pulled into the world of the Satan’s Knights MC with this sensual and suspenseful tale of second chances and starting over.  As the first installment in a brand new trilogy Ms. Bosco brings back old favorites while introducing us to new characters as well as digging deeper into other characters who were on the periphery of this MC.  From the first page to the last she weaves a tale that kept me on the edge of my seat while charming me with a romance that ultimately healed a couple broken and bruised from their pasts.

Readers previous introduction to Bash showed us a Southern Gentleman full of charm who had a tough childhood due to an alcoholic and abusive father with PTSD whose brutality caused his mother to die before her time from the constant beatings.  After his father’s suicide it was just Bash and his mom, leaving him to do all he could to care for her.  It left him a loner with little time for himself.  Joining the Charon MC though gave him a sense of family and gave him a purpose to live life more for himself.  He enjoyed being a Prospect for them but the club never moved him higher which led to frustration, and with his mom’s declining health he started feeling uncertain about his place within the club.  On a quick trip to New York to help a fellow club though he found himself drawn to bartender Lydia, drawn to her spirit as well as the uncertainty and pain in her eyes that he wanted to help heal.  Their one night together made him feel things he hadn’t felt before and once he returned home he couldn’t get her out of his mind.  It was his mother’s passing though that really pushed him to start over and it was a decision that had me cheering.  Winning over Lydia wasn’t easy though as her past has her leery of men, doubting the meaning of love, and fearful of her past coming back to haunt her and hurt others.  Throughout their burgeoning romance Bash is sweet, sexy, and oh so charming.  He’s caring and protective of her as he slowly discovers more about her past so he can keep her safe and be a part of her future.  He’s very loyal to the club too and quickly made a place for himself within the ranks.  His discovery of the differences between New York and Texas living were often humorous and endearing and with Lydia being his guide it deepened their connection in their journey to HEA.  From the first page to the last I found Bash to be a delightful hero with a bit of bad boy balanced with a sweet and lovable side that has me still thinking about him in a story that culminated perfectly from the previous installment.

Lydia is the bartender for the bar that Riggs owns and the glimpses readers have gotten of her are of a hardworking woman often left frustrated by working long hours with no help.  She’s a tough girl to the outside world and doesn’t hesitate to call it like she sees it.  She has a no-nonsense attitude and keeps the Satan’s Knights in their place.  The moment she met Bash though readers saw a very different side to her, one that seemed more vulnerable, with quirks of OCD and a tendency of speaking her thoughts out loud which made for humorous interactions between the two of them.  Their one night-stand was combustible, giving the two of them a night to just be, and with not a care in the world.  When Bash returned to New York he was a man on a mission when it came to Lydia and what started out as a friendship soon became more despite her trying to keep their one night from happening again.  With each interaction they grew closer with them bonding over their mutual pain.  Her secrets were hard to bring out as she feared what would happen to Bash if he knew the truth.  Readers get some inkling though into her past early on...a past full of bruises and feeling controlled.  From the very start Lydia’s a woman on edge with a bag packed for a quick escape and guns close at hand.  She kept herself isolated with few friends as she was determined to keep her secrets to herself and to hide in plain sight.  As the story progresses, and with her and Bash growing closer, it’s only a matter of time before her secret comes out and leaves her in dire need of the safety of being Property of Parrish.

Ms. Bosco has crafted an unforgettable series with the Satan’s Knights MC, an exhilarating read with characters that jump off the page.  They’re a sweet, strong, and sexy group of bad boys with hearts of gold and a few flaws that made them even more realistic.  They’re a family like no other and Bash is a great addition to their ranks.  He and Lydia were a perfect match as both gave what the other needed most.  They’ve been hurt before but were supportive of one another in a steamy relationship balanced with humor and heartwarming moments.  Alongside this memorable couple were the various men and women of the Satan’s Knights, especially Riggs who can always be counted on to bring a bit of levity to any stressful situation.  I was also drawn to Lydia’s lone friend/cross dressing neighbor Chas.  He was a delightful character for his flamboyance, but he was equally supportive of her and defensive towards anyone new. Nico too left an impression, even though he wasn’t present much in this story, with his mysterious absences continuing and leaving me both curious and fearful of what might befall him.  With so much to like about this book I must point out one small quibble and it’s that the story dragged a bit during the early stages of Bash and Lydia’s relationship with too much talking and not enough action.  The story quickly picked up the pace though as danger came calling on the club’s doorstep, danger that could be from the cartel or from somewhere else.  The discovery of who the villain really is led to heart pounding moments that will keep readers guessing while being on the edge of their seats.  With the start of this new trilogy Ms. Bosco once again shows her mastery of the MC genre.  With entertaining bad boys, scorching romances, and pulse pounding action she continues to give readers just what they’ve been asking for in stories that leave me counting down the days until we revisit the men and women who are Property of Parrish!