A wounded warrior returns home in hopes of finding his place in the world in this holiday-themed story that brings him, his former army dog, and a firefighter/EMT together in a journey to give him a chance at a new beginning.  Keep reading to get a tempting taste of Cowboy Christmas Homecoming by June Faver, then add it to your bookshelf.  In honor of this fourth installment in the Dark Horse Cowboys series make sure to fill out the form below for the chance to win 1 of 5 copies of the third installment in this series too! 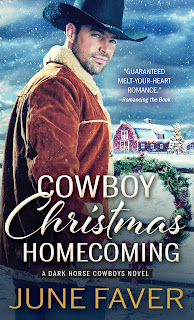 This cowboy’s finally coming home for Christmas
Zach Garrett is home from war, haunted by PTSD, trying to fit in to what has become an alien world. With the holidays fast approaching, his uncle Big Jim Garrett offers him a place on the family ranch. Zach isn’t sure he’s up for a noisy, boisterous Garrett Christmas…until he meets beautiful Stephanie Gale, and all his protests go up in flames.
Firefighter and EMT Stephanie Gale is ready for anything. She’s got her life under control…until she locks eyes with Zack and realizes her heart’s in a whole new kind of danger. But with a little help from Zack’s long-lost army dog, maybe he and Stephanie will be able to make this a Christmas of new beginnings after all.

Stephanie Gayle looked at the check. “Oh, Big Jim. This is so generous. You’re going to make sure the children have a nice Christmas.”
Big Jim shrugged. “It’s the least I can do for those poor kids.” He looked around the room, his gaze falling on a little red-haired girl and a blonde girl, maybe a little older. “I think all children need to be loved.”
“I feel the same way.”
Big Jim’s face morphed from sentimental to grim. “How are those two kids you saved? The ones whose mother got killed.”
Stephanie tried to control the tremor in her voice. “They—they’re still at the children’s center. They don’t have any family members willing to take them in.”
“Well, that’s a damned shame.”
She nodded. “Rafe Neeley, the step-father...He’s been arraigned and bound over for trial.” The image of Rafe’s angry face as he screamed threats made her shudder.
“Good,” Big Jim pronounced. “I hope that sumbitch gets what’s coming to him. I can’t imagine a man hurting a woman or a child...much less murdering the woman you’re married to.”
Stephanie’s throat tightened. “Hope they put him away for a hundred years. The children...they witnessed their mother being murdered. They—they were so traumatized.”
Big Jim let out a snort and reached in the back pocket of his Wranglers. He produced a worn leather billfold, and pulled out a couple of hundred dollar bills. “Here ya’ go. Buy them two angels a little something special...and let me know what happens to them. I hope they wind up with some good family.”
She swallowed hard. “Thanks, Big Jim. I’ll find something special for them.” The words ‘some good family’ were stuck in her craw.
“Come have a cup of coffee, Stephanie.” Big Jim motioned her into the kitchen.
Stephanie took a seat at the counter while Big Jim filled two cups with coffee. He set one in front of her and leaned on the other side of the counter.
This was where Colt’s voice could be heard from the front of the house. “Hello! Where is everyone? I brought my brother from another mother.”
“Back here,” Big Jim called.
Misty and Mark led the way, both grinning. “We got him,” Mark announced.
Colton came next, followed by a tall, muscular man wearing camouflage gear. This guy appeared to be on edge, like he’d just been plucked from a battle ground. His gaze took in the entire interior and everyone in the large kitchen. When he locked eyes with Stephanie, she felt a jolt like an electric shock. He was a Garrett.
It was the Garrett eyes. Those amazing, smokey turquoise eyes, ringed with black lashes. They held her in thrall for a moment before releasing her.
Big Jim let out a yelp. “Zachery Garrett! Come here, boy!” Big Jim held out a hand, and when the newcomer reached for it, Big Jim dragged him closer and clasped him in a man hug. “Dang! It’s been a long time...and look how you’ve grown.”
“Yes, sir. It’s been forever.”
Big Jim pounded him on the back, and then pulled back to look at him. “I’m glad you’re here, son. We all are. Just in time for Christmas.”
“Glad to be here, sir.” His gaze flicked back to Stephanie.
“Where are my manners?” Big Jim asked. “This fine young man is my nephew, Zach Garrett. He’s just been discharged from the US Army.”
Stephanie smiled. Nephew, huh? Garrett through and through.
Big Jim gestured toward her. “And this lovely young lady is Stephanie Gayle. Believe it or not, she’s a firefighter.”
Stephanie gave a one-sided grin and rolled her eyes. “Why do people always find it difficult to think of me as a firefighter?”
“Because we always think of firefighters as big burly men,” Misty said. “One has to see you in action to know what a bad ass you are.”
This caused a round of laughter, all except this Zach guy. He just continued to stare at her as though he was committing her to memory, molecule-by-molecule. It was unsettling, to say the least, but there was something else...something simmering just below the surface.
Stephanie swallowed hard, something that felt like a roll of razor wire at the back of her throat. She straightened her shoulders, refusing to be intimidated by his scrutiny. Who is this guy, anyway?
“Good to meet you, ma’am,” Zach said.
Ma’am? She nodded and offered a hand, which he wrapped with a large, baseball mitt size paw that was warm and very rough.
Colton slapped Zach on the shoulder. “C’mon, bro. Let’s get you settled in.” Colt shouldered the huge duffle bag and headed off toward the room he planned to settle Zach into.
Zach hit her with his laser beam eyes again, gave a little nod, before turning to follow his cousin. Misty and Mark trailed after them.
“He’s had a rough time,” Big Jim said. “My brother died while Zach was deployed so he never got to say goodbye to his father.”
“Oh, that’s so sad,” Stephanie said.
“He’s a good boy. He’s going to be just fine.”
Stephanie agreed. Fine. That pretty much summed up the hottest guy she had laid eyes on in a long time...and she worked with the hottest men in the county. 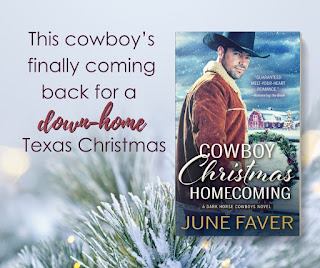 June Faver loves Texas, from the Gulf coast to the panhandle, from the Mexican border to the Piney Woods. Her novels embrace the heart and soul of the state and the larger-than-life Texans who romp across her pages. A former teacher and healthcare professional, she lives and writes in the Texas Hill Country.  Visit Ms. Faver at her website HERE.