A woman looking for revenge for the murder of her father finds herself attracted to the illegitimate son of a mob boss who’s trying to discover his place in his father’s world in this sensual and suspenseful romance.  Keep reading to get a tempting taste of White Knight by Meghan March, along with getting my impressions of this exhilarating read, then add this concluding installment in the Dirty Mafia Duet to your bookshelf! 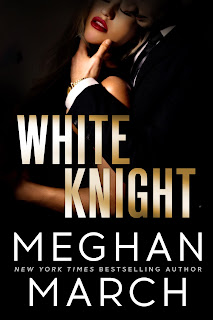 I never expected to be anyone’s white knight. That’s not a role I’ve ever played.
But when the Casso crime family shifts into uncharted territory, they’re looking for a new hero, and they’re looking for me—Cannon Freeman, the black sheep.
But my time in disgrace is at an end.
It’s my turn to rise up and save the people who matter most to me.
Even if my family has never given a damn about me, I will not let them fall.
More than anything, I will not let her fall.
One thing I know is true—in my life, nothing is ever what it seems. 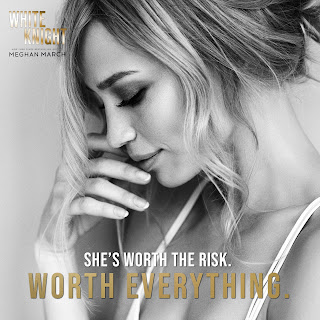 Picking up right where the previous book left off, reader’s hearts immediately start pounding as there’s a smell of blood in the air which leaves many character’s fates unclear.  With Cannon trying to keep his burgeoning lady love alive, along with trying to protect his family from a war with another crime family, there’s lots of twists and turns keeping readers on the edge of their seats from the first page to the last in an exhilarating journey.

Cannon Freeman’s the illegitimate son of Dom, the head of the Casso family...actually one of many illegitimate children to carry the Casso name.  Since the murder of his mother in an act that’s worthy of revenge he’s tried to find his place in the family and by Dom’s side with only more frustration the result.  Though he lives within the world of the mob he’s clearly not a typical mobster.  He’s a businessman through and through and as the story progressed he used that knowledge to keep the bloodshed at bay and through surprising twists and turns.  In a story with numerous characters, Cannon stood out with an intriguing dichotomy that drew me to him.  On one side is a mysterious yet commanding man, a man who’s self-assured and dedicated to the morals his kindhearted mother taught him.  He’s a man with a big heart, someone who’s protective of family and when it comes to the woman who instantly caught his heart he’d do all he could to keep her safe.  He’s methodical and thinks things through before he acts which makes him a formidable leader when fate forces the role on him.  Being with Drew/Memphis also brings out a romantic side to him, one that I found endearing because of his warm words and deeds, along with a flirtatiousness that charmed me and made their pairing even more delightful.

Drew/Memphis is a woman on a mission...a mission to discover the truth about her father’s death. To do that she uses every trick she learned through her career as an investigative reporter to infiltrate the Casso family in hopes of putting them all in jail.  Her plan for revenge though quickly goes awry the moment she meets Cannon.  He’s a man like no other, a man with a dangerous persona who shows her a completely different side to himself once she lets her barriers down.  Together they make a formidable pair in a world that she never thought she’d be a part of but who now can’t see herself anywhere else.  At the start of this story Drew has become obsessed with finding out the truth about her father’s death, become so fixated that she’s lost herself and left no time for anything else.  Meeting Cannon though has her pursuing him for her own wants instead of using him to bring his family down.  She might’ve once been an adversary but with each turn of the page she became his partner in and out of the bedroom.  Drew’s a very likable heroine, one who’s dedicated to family and is willing to do whatever necessary for that family.  Getting to know other members of the Casso family has her conflicted but ready to do what’s necessary to keep Cannon safe in a romance that was sweet and sexy.

From start to finish I enjoyed this sensual and suspenseful read full of surprising twists and turns.  The action was nicely balanced with a romance that put a smile on my face while making me blush a time or two.  The romance between Cannon and Drew was a satisfying one full of sexual tension that saw each of them grow, gave him more confidence in himself while she opened her heart to the possibilities of getting more out of life for herself.  They were immensely protective of each other which gave a vibe of them against the world which had me cheering for them too.  Being illegitimate had Cannon desperate to make a connection to his other half-siblings, desperate to find a bond and a family of his own which had him making a few poor choices along the way. Despite those poor choices I found myself wanting to hug him as all he wanted was to belong and seeing him with his half-siblings warmed my heart as they slowly started reconnecting as the story progressed.  Seeing his half-siblings was another highlight of this story as these couples had their stories previously told and which had me excited to get an update of them all in this concluding tale that tied many of Ms. March’s book series together.  These characters presented themselves as a strong family unit which Cannon needed in his plan to avert war.  On a whole this was a quick read full of secrets and suspense that kept me continually on edge as heroes and villains became interchangeable with each turn of the page.  The romance was empowering to both Cannon and Drew and had me rooting for them every step of the way.  Ms. March crafted yet another well-balanced story that pulled me in wholeheartedly as we raced to a thrilling and rewarding HEA that I definitely recommend to readers looking for an exhilarating and romantic story.

Making the jump from corporate lawyer to romance author was a leap of faith that New York Times, #1 Wall Street Journal, and USA Today bestselling author Meghan March will never regret. With over thirty titles published, she has sold millions of books in nearly a dozen languages to fellow romance-lovers around the world. A nomad at heart, she can currently be found in the woods of the Pacific Northwest, living her happily ever after with her real-life alpha hero.
Sign up for Meghan's newsletter and receive exclusive content that she saves for her subscribers.
To get the inside scoop on a daily basis, search Meghan March's Runaway Readers on FACEBOOK and join the fun.