Readers looking to make this summer even hotter will find plenty of scorching encounters between the pages as a woman finds herself bargaining with a trio of demons for her sister's life...and finding herself the center of their erotic attention.  Keep reading to get a tempting taste of Hard Lust by Tina Donahue, along with hearing from the author about this release, then discover even more about this book by visiting the other sites hosting this tour.  In honor of this sexy standalone make sure to fill out the form below for the chance to win a $10 bookstore GC too! 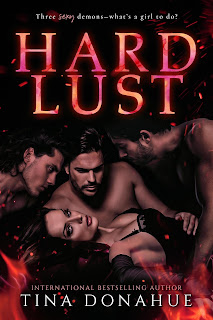 Don't ever trust a demon. Unfortunately, Megan has learned that lesson too late. The deal she made to save her sister's life has landed her in hell about seventy years early. And now she has three sexy demons trying to tell her what to do. Nope. Not going to happen.
These guys have never had to deal with such defiance. Andros figures she's due for some erotic discipline, which he'll happily provide. Racan's pure alpha, his hardcore plans include bondage and submission. Quiet yet intense, Vespar expects endless kink to spice up their carnal play.
Who would have ever expected she'd end up falling for them? Too bad demons can't be trusted...because someone is trying to kill the magic and threatening her stay in this lusty world.

Megan looked at him. “Do you guys ever get men down here?"
He shook his head. Having nothing except female condemned was a feature, not a bug, and a perk he wouldn’t give up without a fight. “Let’s go. Your time’s running out."
She trotted to keep up with him. “My half hour started already?”"
He stopped. “Twenty minutes.” He jabbed his finger at her. “You heard what Racan said. Don’t try to put anything over on us, because you can’t. Got it? Or would you care to try for fifteen minutes? Possibly less?"
Her lower lip trembled. “Why are you being so mean? You’re not that way really. You seem like a nice guy."
He stepped back and bumped into the wall. “Guy?"
She flicked her wrist. “Demon. Devil. Entity. Whatever."
“Try fallen angel."
Her mouth rounded. “Get out. You started up there?” She pointed toward Heaven. “I knew it. You are a good man."
He wasn’t Attila the Hun or Vlad the Impaler, but he wasn’t as great as she’d said. “You’ve forgotten how I spanked you?"
Her cheeks got rosy, her face dreamy. “Uh-uh."
He leaned in. “Are you turned on?"
“What?” She blinked and frowned. “No way."
Her taut nipples told another tale. “There’s something you should know.” He tapped her chin. “I am not a good man."
“Demon then. And yeah, you are. Andros told you to discipline me. You didn’t do it on your own.” He’d been itching for the chance when Andros presented the opportunity. “Don’t be so certain.” “I am.” She stroked his tat.
His gums tingled.
“What happened in Heaven? How’d you get down here?"
Bethshiba. His, Andros, and Racan’s crime hadn’t been that bad. They’d simply wanted to be heard and considered. Instead, they received the ultimate sentence—banishment.
“The reason isn’t important. This is.” He touched the handbook. “You need to learn everything you can. There isn’t much time."
She screwed up her mouth. “I thought I was here for eternity.” “Do you ever stop arguing?"
“I will, I swear. On one condition."
He held back laughter at her gall. “On one what?"
“Help me, please. Show me the way out of here. At the least, get me an audience with Satan so I can plead my case."
Poor girl was losing it. “Begging doesn’t work down here. With him or me. We need to go."
“Not yet.” She pressed closer to stop him from leaving, her nipples poking his pecs, her cunt smack against his groin.
Heat rose between them, unmasked desire sparking in her eyes. His hair stood on end. Her musk and the scent from his leather pants mingled to create one fucking great fragrance. She rocked her hips slowly, sensuously, arousal parting her lips. “I was... Uh, I was... That is, I was..."
He pumped against her, his already massive erection increasing by the second.
She met him thrust for thrust, their gyrations lewd. “Wait.” She kept grinding into him. “I need to say this."
“Sure."
They maintained their carnal dance.
“Go on.” He wanted to hear this.
She pulled in a huge breath. “I was taking law classes at night before I got here. I know how to present a case. I’m a great litigator. It’s in my blood. I’ll make Satan see reason. I won’t lose."
She couldn’t have killed the magic between them faster if she’d tried. He stopped pretend fucking and stepped away. “There’s no winning down here for the condemned.” The moment she opened her plush lips, Satan would vaporize her then bring her back and get his rocks off on torture...the kind she wouldn’t like. “It’s not possible.” He grasped her biceps. “You need to get a grip and accept your fate."
“Screw that.” She stroked his fingers.
Remarkable heat and delight shot up his arm and landed in his balls and cock, both still ready to boogie, her effect on him more than it should be or what he seemed able to stop. 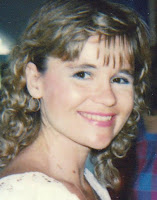 Tina’s an Amazon and international bestselling novelist who writes passionate romance for every taste – ‘heat with heart’ – for traditional publishers and indie. Booklist, Publisher’s Weekly, Romantic Times and numerous online sites have praised her work. She’s won Readers’ Choice Awards, was named a finalist in the EPIC competition, received a Book of the Year award, The Golden Nib Award, awards of merit in the RWA Holt Medallion competitions, and second place in the NEC RWA contests. She’s featured in the Novel & Short Story Writer’s Market. Before penning romances, she worked at a major Hollywood production company in Story Direction.
On a less serious note: she’s an admitted and unrepentant chocoholic, brakes for Mexican restaurants, and has been known to moan like Meg Ryan in When Harry Met Sally while wolfing down tostadas. She’s flown a single-engine airplane (freaking scary), rewired an old house using an ‘electricity for dummies’ book, and is horribly shy despite the hot romances she writes.