Review for Not An Angel by Dawn Chartier 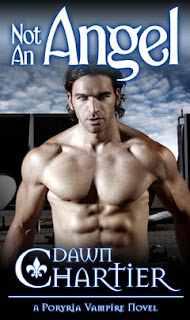 Kira McCoy wants to die. Losing her husband and daughter tragically left her without hope. Now her disturbed brother-in-law will stop at nothing to have her for himself. All she wants is to find peace, but instead finds herself on top of a bridge ready to end her suffering.

Protector of the Poryria, Trace Stuart is called to defend his race or embrace death. Defending humans is not part of the plan, but he cannot stop himself from saving Kira.

Realizing that he shares a special bond with Kira, Trace defies his Queen and rushes into the heart of darkness in order to rescue the woman he loves. Will Kira be able to reach past her own pain to pull them both into the light?


********************
Just when you thought a new twist to vampires couldn't be found, along comes an author that puts a new spin on those creatures of the night.  For the vampires of the Poryria Series by Dawn Chartier, full vampirism occurs only when giving into the darkness that's in all their souls.  They can't be out in direct sunlight and only have to feed occasionally, but most of the other myths are untrue for Chartier's sexy men.  This made for a refreshingly entertaining story that has me excited to return to the world Ms. Chartier's created.
Kira McCoy has experienced many losses, along with a scarily overprotective brother-in-law, that has led her to the edge of a bridge wanting to end it all.  Luckily for her Trace Stuart and his brother Mike happen upon her and bring her back from near-death.  Through his psychic abilities Trace stays with Kira through her dreams to help her recover.  Though she calls him an angel, Trace is anything but.  As a protector of the Poryria he saves his kind from full-blooded vampires called Vrykolakas and tries to abstain from interacting with humans.  After a previous experience with loving a human came to a tragic end, he swore he'd never get involved with a human again but something in Kira calls to him and calms his ever-darkening soul.  He has to go against his own kind to defend Kira against a number of villains both human and preternatural.  And just as his soul appears lost, it's the love of a mere mortal that saves him right back.
Trace is the quintessential hero, honorable and sexy.  He's sworn to protect his kind but has always felt separate from them.  That's why he's so drawn to Kira.  She's felt deeply alone for a long time too and it's through their shared dreams that their relationship solidifies.  Once they interact in the real world, he has to convince her of what he really is and hope she accepts him.  These scenes were funny as each vampire myth was shot down by Trace.  He never pushed Kira into a relationship even though he mentally could have.  He let things develop slowly and sweetly and rescued her when she needed him most.  Their sexual interludes are steamy and sensual and very worth the wait.  Their connection was off the charts and I was breathlessly awaiting their coming together.  Not only was Trace a great lover and powerful warrior, he was also a caring brother in his dealings with younger brother Mike.  Their brotherly banter was realistically entertaining and I loved their moments of bickering.  It made Trace even more likable and charming and had me rooting for him every step of the way.

Kira's rather weak at the start of the story.  Everything she's been through has worn her down and left suicide her only option.  As she interacts more with Trace you see a different side to her, she gains strength and the ability to not only stand up for herself but also the man she loves.  She gets the chance to kick some butt and does an admirable job of it.  By the end she'd won me over and seeing her start her life anew was heartwarming.

The villains in this story are larger than life.  Brother-in-law Jeff is truly creepy and manipulates everything and everyone to get his way.  His obsession with Kira is out of control and the steps he takes to try to get her to be with him are shocking.  The new breed of Vrykolakas that Trace and Mike chase throughout the story is more dangerous than any seen before.  Chason is diabolically smart and just as manipulative as Jeff.  His kills are extremely bloody and done in a taunting manner.  When the truth comes out about who he really is, a whole new can of worms is opened that will have ramifications throughout the rest of the series.

There are lots of secondary characters that also added to my enjoyment of this story.  Mike is the typical younger brother trying to earn his birthright and make his brother proud.  He's snarky and sexy and now that he owes a debt to a human, things will definitely get more humorously difficult for him and I can barely wait.  I LOVE his character and was very drawn to him from the moment he came on the scene.  Not only am I looking forward to what happens with his character but the other hunters of Deveraux, Landon, and Spyder have me chewing at the bit to learn more about them.  They're sexy and mysterious men who left a lasting impression on me and once you see them you'll know what I mean.  They're definitely bad to the bone!

This was a fast-paced, adrenalin rush of a story that had me on the edge of my seat from the very start.  It offers a fresh take on the vampire myth and I give the author credit for coming up with something new and entertaining.  The characters were memorable and the romance was full of heartache that had me fully immersed in the story and sad when the final page was turned.  For those wanting a fresh voice in the world of the paranormal, look no further than Not An Angel by Dawn Chartier.

*I received this book from the author in exchange for my honest opinion.
at January 15, 2012